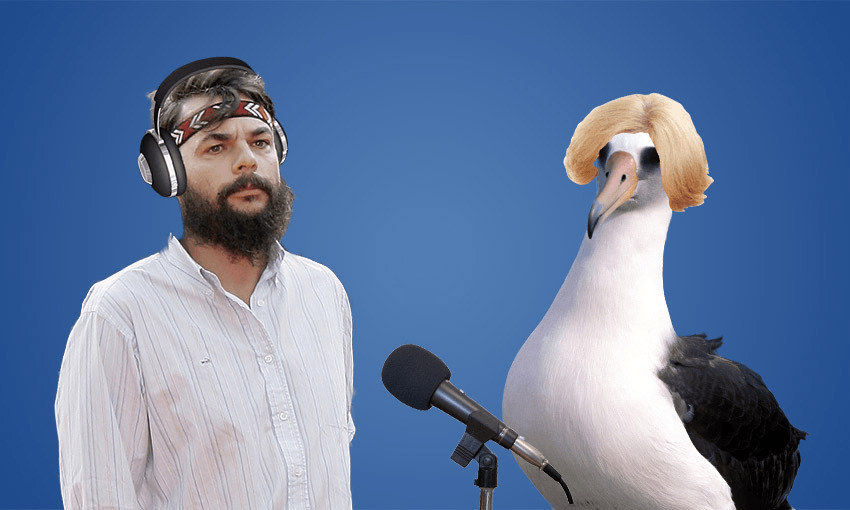 Marcus Lush, Judith and the albatross that wasn’t called Bob

Merv was not alone. Marcus Lush has, once again, been doing God’s work: confronting the nation’s late night racists one by one.

Newstalk ZB late host Marcus Lush was last night confronted by Judith, who called up demanding answers to one of the biggest questions of our time. Why are Albatross chicks always given a Māori name?

The late night caller, who is not thought to be linked to Manurewa nor the National Party’s board, is referring to this: a Department of Conservation competition to name an albatross chick before it flies across the Pacific Ocean to feed near South America.

Ringing in at about 11.45pm last night, Judith started humbly enough by simply admitting she hasn’t been paying attention.

“I’m wanting to change subject because I haven’t been listening, but I’m just wondering who chooses the name for the albatross chicks,” she asked Lush.

“I’m not at all racist,” Judith stated, before, well, surprise: “But I don’t know why the albatross chicks have to be called a Māori name all the time.”

The competition’s been running for five years, which, as we all know, equates to “all the time”. Judith later admitted she only knew for sure that a Māori name had been given the last two years.

The albatross name that generated such anger from Judith was Atawhai, meaning kindness, and chosen as a result of the Covid-19 pandemic.

Judith, however, had bigger, bolder, whiter ideas. “Reg, or Jack, or Bob, or whatever,” Judith said, admitting she herself had submitted Bob as a potential name.

Pressed on why she thought Bob was a suitably avian name, Judith said she had “no reason”.

Lush, with tactful timing, then pulled up the judging criteria for the competition. The name must have relevance to the theme of “celebrating connection”, be original and creative, and be reflective of the characteristics of the species or their habitat on the peninsula.

“Do you think Bob would fit into those criteria well?” questioned Lush.

“Well, not particularly, no,” Judith conceded. “I just wonder why it is always a Māori name because I don’t think albatrosses are particularly related to the Māoris.”

Judith wouldn’t back down: “They’re not a bird that’s, you know, depicted particularly by the Māori community, they go all round the world don’t they?”

Lush: “Yes, but those ones are the only ones in the world that nest on the mainland.”

Lush: “So that in itself would say that, from my reckoning, they have always been there.”

Judith: “But has that mainland always been Māori, or does it have to be a Māori name?”

Lush: “I think you’ve got a problem, Judith.”

At about the six minute mark, Judith revealed her reason for speaking out about the naming of albatrosses. They have, she told Lush, particular importance to her.

Judith: “They’ve always been here, and always came down to Taiaroa Head. Yeah, they have been important. They’re a beautiful bird.”

Lush: “So why would you want to call a bird Bob?”

Listen to the full (14 minute!!) exchange below: