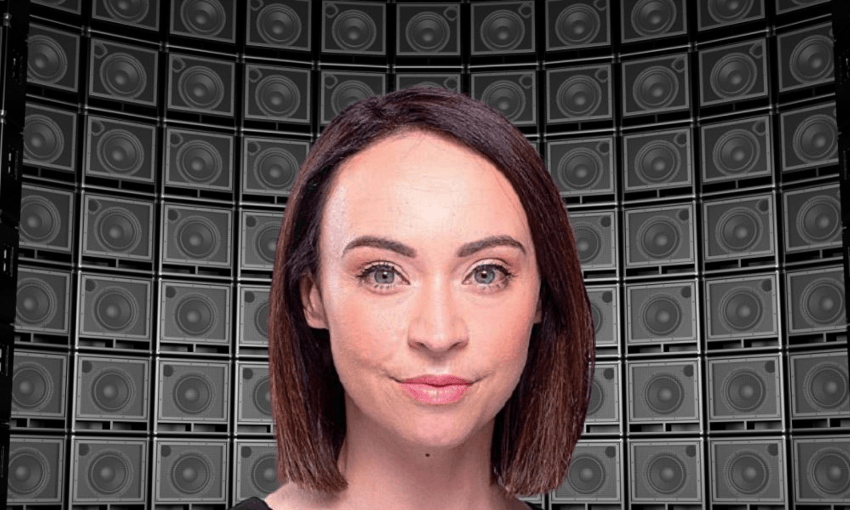 Tova O’Brien will a rebranded MagicTalk at MediaWorks from Discovery in January 2022.

Tova O’Brien will a rebranded MagicTalk at MediaWorks from Discovery in January 2022.
Opinion

A few months ago MediaWorks’ news and talk radio stocks looked in tatters. Now they’ve gone and hired the biggest star in TV news as the morning host on an unnamed, rebranded MagicTalk, writes Toby Manhire.

If something like this was happening in politics, chances are Tova O’Brien would be chasing it down the corridor, breaking the story and tying it up with a snappy one-liner. This time she is the story, however: the biggest star in New Zealand political journalism is jumping from TV to radio, from Three to Mediaworks. The move will send a shiver up the spines of Newstalk ZB and RNZ, but only muted relief for politicians who grimace when she approaches: as host of a new morning radio show she’s unlikely to lose her reputation for charming ruthlessness.

She certainly won’t lose her contact book, one which has produced a firehose of stories since she took over from Patrick Gower as Newshub political editor in 2018 on her return from the UK. She has routinely seemed to have had a much better grip on the mood of the National caucus, for example, than whoever happened to be leading the party at the time.

O’Brien – who is very definitely an evil agent of the right and an evil agent of the left, depending on which partisan zealot you’re listening to – has broken more stories in the last three-and-a-bit years than most of us could hope to in a career. In keeping with the approach of Newshub predecessors, there has been a tabloid thrill and scoops galore but only rarely have they spilled into sensationalism. Among the recent triumphs: the morning-after interview with Jami-Lee Ross that made waves around the world and her package on the horrific first day of National leader Todd Muller, which this website correctly called “one of the most exhilarating, confronting political stories to air on national television”.

For someone who can be so professionally savage, she is incredibly well liked: broadly loved in the Press Gallery, adored by those who work with her directly. Even politicians who have been left a smouldering pile of ashes after an O’Brien 6pm special like her. Not all of them, mind you.

For Discovery, which took the broadcast operations off MediaWorks’ hands just over a year ago but has kept most news and current affairs output intact while other departments begin to be overseen from Australia, the question will be to whom does Tova hand the beret? The dynamism and sometimes unpredictability of the last three political editors, from Garner to Gower to O’Brien, is a big part of the 6pm appeal on Three. Jenna Lynch has gone from strength to strength over the last couple of years. She’ll be in the running. Lloyd Burr, who followed Tovian footsteps in going from the press gallery to Europe correspondent, would be a decent shout, but he recently took up a radio gig, on Magic Talk. What about looking to poach from the rivals? If I were at TVNZ, I’d be offering Maiki Sherman a pay rise immediately.

At MediaWorks, meanwhile, the corks will be flying. Just a few months ago, the place looked like the smashed up remains of a saloon fight. Fill-in host John Banks was booted for being reprehensible. Sean Plunket, a brilliant broadcaster turned tedious attention seeker, vanished into obsolescence. Peter Williams (good on cricket, less good with conspiracies) similarly disappeared. That’s not to mention the blistering report into years of gutter culture and misconduct at MediaWorks a few months back. Had Cam Wallace, who arrived from Air New Zealand at MediaWorks at the start of the year as it began its new life as a radio and outdoor advertising company without the television glamour and burden, bitten off more than he could chew?

Wallace’s signing of Dallas Gurney, former editor-in-chief of Newstalk ZB, was the first clear sign of a turnaround. Lloyd Burr came on board and time was called on the deal with Discovery that signalled the end of the news and AM Show pipeline from the old stablemate. Meanwhile, MediaWorks staffers were last week presented with a short vision statement, outlining the mission “to be New Zealand’s first choice for media for our people, customers and audiences”. The values were outlined as “We don’t do boring”, “Love your tribe” and Bring our best selves”, and the purpose as being “to colour and connect our communities”. It was remarkable, according to one staffer, not so much for the words themselves, as for seeking to articulate a new kaupapa.

For Wallace and Gurney, the poaching of O’Brien is a masterstroke, a literal turning-of-the-dial moment. It makes it very clear that they’re not content with running a fringe talk radio station. As they attempt to assemble a newsroom from scratch, O’Brien’s appointment is a powerful signal that they’re not pissing around. Her very presence will attract other talent.

There are very few people who might give NZME and the jewel in its ZB crown, The Mike Hosking Breakfast, a run for their money. Hosking towers over commercial talk competitors, and is pretty well neck and neck with RNZ’s flagship Morning Report. (Fun fact: O’Brien’s mum once worked as Hosking’s producer.) The new MediaWorks show presents a unique challenge to ZB, its host bringing news chops, contacts galore and commercial sensibilities. And though it’s not always easy to convey in news bulletins, she can be very funny. A decent slice of Morning Report listeners, too, including those whose listenership is in part down to distaste for Hosking’s overt political proclivities, may be up for grabs. The Tova Show begins in the new year.