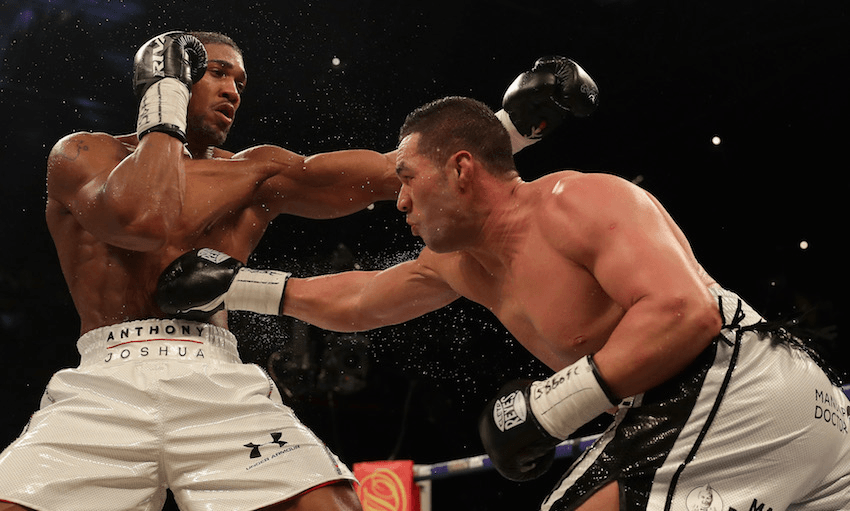 Metamorphosis is the most revealing Joseph Parker doco yet

Half an hour into Metamorphosis, the new documentary following Joseph Parker in the build up to his championship fight last March, there is an interaction that those of us on the far temporal side of the bout recognise as grave and ominous. It is also a moment that reveals as much about Team Parker and professional boxing as months of pre-fight coverage ever did, and is easily my highpoint of the film.

Parker, coach Kevin Barry and several anonymous officials are standing in a hallway somewhere in the bowels of Cardiff’s Principality Stadium, receiving a pre-fight briefing from referee Giuseppe Quartarone. There’s a hum from above where undercard fighters are entertaining the early arrivals. Most people, including myself, are still drinking outside.

Quartarone, a low-rent Italian official without a signature bout to his record, is gesticulating and bumbling in broken English. Boxing has rules, but as with any high-paced sport there are grey areas. In the heat of the moment, the letter of the law is often more of a guideline, and so athletes will use the briefing to get a feel for the referee’s quirks and temperament in order to fine tune their strategy last minute. But there is very little to glean from a man who’s functionally incoherent.

Quartarone finishes talking and asks for a photo. Parker agrees. Barry, chewing gum and staring unblinking at the referee from the sideline, shakes his head incredulously.

“Hang on a minute. Is your English good?” he asks.

“Are you going to let the fighters work in the clinch?”

Quartarone squints, opens his mouth a little and blinks vacantly. Parker steps in as translator, presumably miming boxing in close – where he expected to have the most success against Britain’s Anthony Joshua.

“That’s going to make it very difficult for me to ask these questions then isn’t it,” says Barry.

As British officials jockey around the referee, vouching for his ability and trying to reach a consensus, Barry stares Quartarone down, before he acquiesces with a feeble fist-bump.

Quartarone did not keep his word – much to the dismay of Parker, his team, and the people of New Zealand and Samoa.

These moments are the story of boxing. All the talk of mindset and poise and mental toughness applies as much to the minutiae around rules and equipment and promotion as it does to the fight itself. Individually, every small snag adds to the stress piling day by day on a fighter. Each instance throws them for a loop, but taken collectively these obstacles comprise the battleground on which the mental warfare pundits espouse actually takes place.

These are the ‘intangibles’ commentators speak of, and the true value in documentaries such as Metamorphosis, which aspire to be more than the video equivalent of a puff profile.

When I reported on Parker’s fight with Carlos Takam in May of 2016, perhaps the most significant moment in the bout came an hour before the fight when officials from the Takam camp burst into the changing room, demanding to check Parker’s wraps. Again in Cardiff things threatened to deteriorate at a crucial moment – but that’s for you to see.

There are other revelations, expositions on many of the storylines that Team Parker have pushed in the New Zealand media, as well as glimpses into Parker’s mindset going forward. We see the 26-year-old talking of home ownership, a potential nbusiness perhaps. But the value here is in seeing a slice of the excruciating drama, the culmination of the endless months of work that go in before a punch is thrown. And how each moment becomes more and more precarious, not lest the fight itself.

No scene is more powerful, more hostile than Parker’s arrival at the stadium, escorted through the twilight Welsh gloom by police motorcade. On the streets, 80,000 descend on the virtual colosseum that dominates Cardiff. As Kevin Barry said ad nauseam after the fight, we should all be incredibly proud of what Joseph Parker has achieved. This documentary shows why.

Joseph Parker: Metamorphosis is playing this month on Sky Sport.