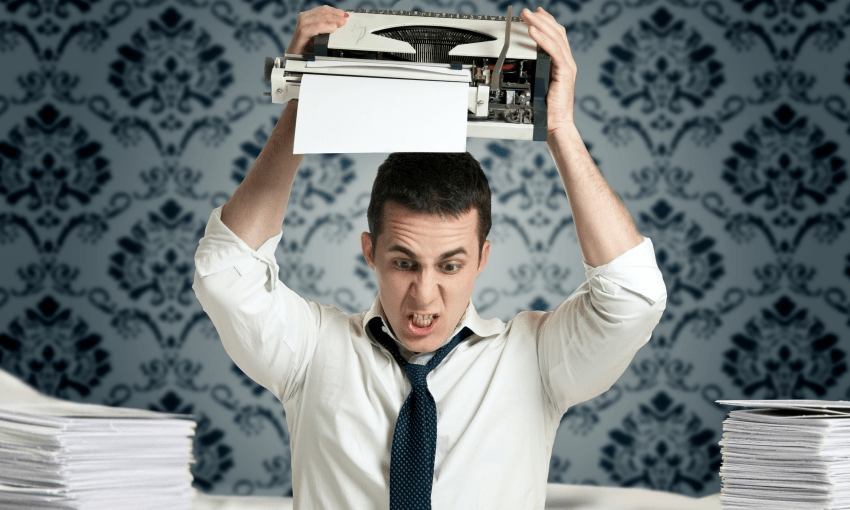 Last week we published a piece from a journalism student who feared there might not be a worthwhile career for them when they finally graduated. Today, a rebuttal from journalism academic Daniel Nielsen who says actually, it’s not as bad as you might think.

Much has changed for journalism in the last decade or two. The internet happened, bringing about the collapse of the newspaper business model, which relied on classified advertising. Online listing services such as eBay and TradeMe crushed the foundation of that model in a few quick years.

Television and radio news outlets have not declined as rapidly as newspapers, but media convergence, falling advertising revenue and a de-prioritisation of news and current affairs have brought about massive change at legacy broadcasters too.

Journalism is a profession undergoing enormous and rapid change. Journalism educators are feeling that too. Whitirea scrapped its journalism course last year, and Canterbury University’s postgraduate journalism diploma will soon cease to exist. The number of traditional journalism jobs has declined drastically over the last two decades. Not surprisingly, the number of journalism students has dropped too. If they hadn’t, job prospects for graduates really would be bleak. An oversupply of people with journalism qualifications would mean a proportionally smaller number of low-paid jobs available.

Journalism is a less popular career choice today than it was just a few years ago, but that is less to do with opportunity and more to do with how society values journalists and public perceptions of the importance of good journalism in society.

Now and then an experienced journo will lament the demise of the cadet system, whereby you got into the industry by starting as a “runner”, fetching and dropping off stuff for the important people in the newsroom. You worked your way in and learned on the job. You learned by doing, not studying. The theory is that media organisations no longer take responsibility for training journalists; that the burden lies with the government, or because we pay to study, the individual.

That argument is built on a false premise, because when you study journalism, at least at the New Zealand Broadcasting School (NZBS), you learn by doing. Besides, media organisations are and will continue to be involved in training, mentoring and enabling students to learn in the industry.

NZBS has had a paid internship programme in place since the early 1990s. Students spend two years on campus in Christchurch before going into a 24-week internship at a media organisation to complete the degree. The students then reflect and write academically about the experience. They learn by doing and studying. Essentially, it is a modern cadet programme. To boot, the employment rate for NZBS journalism graduates is between 90 and 95 percent.

Studying journalism is not as popular as it once was. Of course it isn’t, for a multitude of reasons. The pay is not great, but it’s not as poor as perceived. Unfortunately, that is something the government’s careers website does nothing to dispel. And yes, the number of traditional journalism jobs is in decline.

Journalism students are aware that working on the “dark side” is an option, even immediately after graduating. The reality is journalism skills transfer across the communications field. Besides, it’s not all “dark”. I have worked in digital publishing and editing jobs, where part of the job was journalistic, while other parts involved e-commerce campaigns, audience analytics reporting and hitting subscriptions targets. Right now, as well as teaching journalism, I run a side hustle writing content strategy and optimising digital channels for organisations. My journalism education has been the best possible preparation for working in those communications roles.

Still, nothing beats the newsroom.

I asked a few current journalism students, interns and recent graduates how they felt about their career prospects. An intern at RNZ said, “People don’t get into it to have the hours and security of a ‘normal’ job… they shouldn’t do it if they don’t have passion for it.”

These students are not unrealistic. They know it’s a tough gig.

A recent graduate, now employed at Newshub, said, “I’m sleep deprived and it looks like I’ve aged five years in one, but it’s worth it for the adrenaline rush.”

If that doesn’t appeal to you, maybe journalism isn’t the career for you?

Current journalism students I’ve spoken with are generally optimistic about their career prospects. They know the industry is changing, but they are aware how in demand they are.

News organisations are crying out for more qualified students to fill entry-level roles. The big broadcasters, especially, want more journalism graduates than they can get.

TVNZ news boss Phil O’Sullivan said he had been unable to get enough paid interns for the last two years running. He added that those, who do come through the door, tend to land a fulltime job.

For O’Sullivan: “Journalism is still a vital and very viable career choice.”

Regional newsrooms, especially in the South Island, also find it tough to find young reporters. A journalism student, who is prepared to work in Timaru, Blenheim or even Christchurch, has bright job prospects. In fact, starting in the regions can do wonders for a young journalist’s career as it brings more responsibility and reporting opportunities than they would get in Auckland’s big, converged newsrooms.

Journalism has challenges. The traditional business model is borked. Even the big, global venture capital-backed digital-native media companies such as Vice, Buzzfeed and Huffpost have cut hundreds of staff recently. Making money from news is hard. It seems only exceptional legacy media brands like the New York Times and Washington Post are thriving, and that is reportedly down to the “Trump bump” boosting subscriptions.

While journalism in New Zealand has well-documented problems, it is of vital importance to a functioning democracy. The fact is journalism matters. In a society where citizens have the right to elect their representatives, people need to be informed. It is the job of journalism to provide that information; to ask questions and hold those in power to account; to serve the public interest.

Being a journalist is a privilege and job prospects for students of the craft can seem tough but they are far from bleak. It is a tough gig, but it’s a rewarding one filled with purpose.