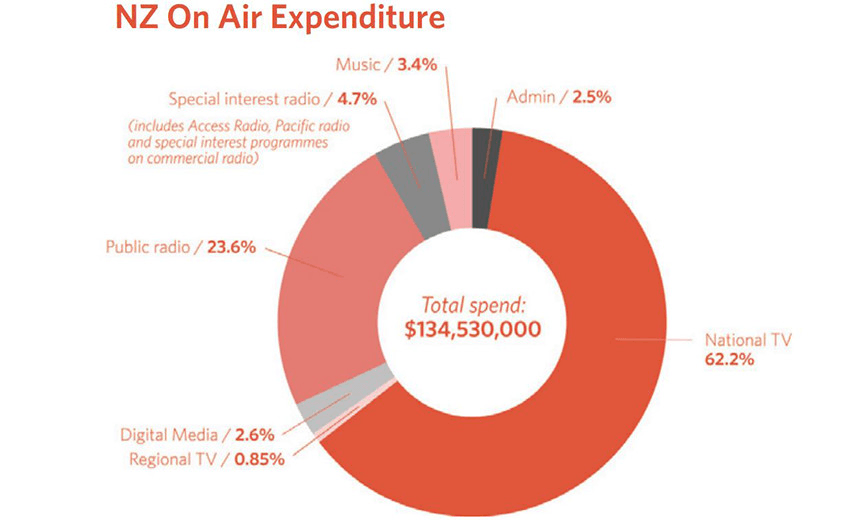 Such is the current media environment the release of NZ On Air’s state-of-its-work report feels a bit like a message in bottle chucked into a chum bucket and fed to Jaws. The funding body has its cheerleaders and its detractors, but its importance to the media consuming public, the various production industries and just about everyone who wants to make stuff has arguably never been greater. But is NZ On Air really adapting to the “changing needs of audiences”? I thought I’d take a look to try and figure it out.

The first thing to point out is where NZOA puts the dosh. This is their breakdown.

Note the smallest slices; NZ On Air spends about the same amount of money on admin as it does digital media and way more than on regional TV. Part of NZ On Air’s remit is to get local content to the audience and the report argues national TV is still where the majority of our eyeballs are. For example, NZ On Air says Country Calendar draws in nearly 600,000 viewers (admitedly this is a surprise, I swear every time I’ve caught the show they’re either talking to seaweed farmers or someone who wants to farm wekas).

Fine and dandy, but where exactly is local content being screened? Gaze ye upon the NZ On Air graph for TV below.

It’s been charted and commented on for a while, but commercial TV’s disinterest in local content is still striking.While local content on TV is growing (not an easy thing in this age of funding freezes), it’s being driven mostly by Māori TV with a thimble full of help from Prime and FOUR. However, as NZ On Air notes, first-run new content didn’t grow at all over the year due to the “difficult economic environment”.

Earlier this year NZ On Air released a discussion paper about possibly changing their strategy for funding children’s content. It came out of commissioned research around how children use digital devices and the internet. The figures quoted in the report from the research show how deep into digital children are:

If the kids are heading online in a big way, so are creators. According to a presentation given by Brenda Leeuwenberg, NZ On Air’s Head of Digital, at Webfest earlier this year, there were 55 applications for web series funding in the previous funding year. In the current round there were 110 applications.

Music is also heading online and faster than other forms of content. According to a 2014 NZ On Air survey:

A Crawl Or A Stampede?

NZ On Air’s reckons that audiences are in the middle of a “slow shift” to digital. The report is, in part, their case for claiming they’re addressing that shift with appropriate levels of funding; alltracks.co.nz is mentioned four times, as is the 1.5 million visits to thecoconet.tv, among other projects. Their stance is TV is still king, so it makes sense to drop the majority of funding there.

That brings us back to where we started: the funding doughnut at the top of the page. There’s an argument that NZ On Air should retreat from the legacy media room, backing out slowly waving a pair of birds in the air as they go. That’s plain nuts, those 600K Country Calendar viewers would dictate otherwise.

It should be recognised that NZ On Air is in a hard place, they have to justify how they spend our pingers and it’s probably a hard sell to Government when research shows the audience is still watching TV. It could also seem that the argument being made here is more than a little self-serving. However, even with that in mind, a 2.6 percent spend on digital still seems hugely inequitable. And while the aforementioned May discussion paper seems to point to a forthcoming restructure of children’s funding, it’s not just the under-16s that are moving to digital.

NZ On Air could stand to be bolder in its digital and online push. Most of us are already here. It’d be great if they could join us.

Update, 2:52pm: NZ On Air has been in touch to say the digital part of the doughnut refers to online content only. They also point out that “.. Every piece of content we create must now be online as well as wherever it is first broadcast, so that means there’s actually a heck of a lot of digital content created within the other parts of the donut.”

They’ve also stated that,as per their Statement of Performance, they will increase the digital media fund by $400K to $3.8m for 2015/16.

Any increase in funding during an apparently never ending budget freeze is something of a Christmas miracle, but we still think the balance for where funding goes leans too far in TV’s direction.