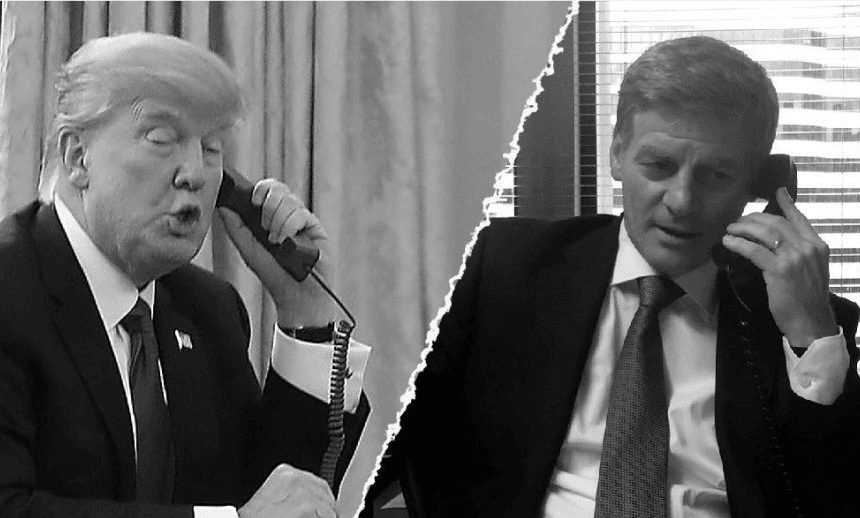 Donald Trump and Bill English in conversation with other people. Images: Getty/Twitter

Donald Trump and Bill English in conversation with other people. Images: Getty/Twitter

Murdoch Stephens: Trump’s refugee ban is a moral outrage that shames America. When will PM Bill English say so?

“France and Germany have already stepped up and denounced Trump’s refugee policies.

But where is New Zealand’s Prime Minister Bill English?

One can imagine his strategists talking through their response to Trump’s fear mongering. Prudence would have been the course charted before this week, with English hoping not to be drawn into commenting on the fairness, legality or even morality of Trump’s blitzkrieg. But how can English stay silent now?”

Tara Ward: Judging from this promo video, The Project is set within a dystopian La La Land nightmare

“I love a newsreader hornpipe as much as the next clown, but I’m still not 100% sure what The Project NZ is. Amidst the high kicks and tumbling cyclists, host Kanoa Lloyd warbled something about headlines and entertainment. Sorry, what was that? News? Who cares, because 5, 6, 7, 8, cheesy wink, jazz hands.”

Don Rowe: Why does the idea of te reo Māori as a core subject make so many people flip out?

“There are clear and transferable cognitive benefits to learning a second language. Anecdotally, exposure to Māori at school has also made learning Spanish much easier – things like rolling r’s, reading phonetically and varying the way vowels are pronounced are a significant part of the process.

Besides, education isn’t purely about pumping out efficient automatons, it’s about growing well-rounded people who are valuable for more than just their economic potential. An understanding and cultural context for our own history – which we still barely teach *cough* land wars *cough* – creates a more informed and considered citizenry.”

Alex Casey: Okay so you marched, now what? A toolkit for New Zealand to get shit done

“The first is simple: enrol to vote, and make sure your information is up to date. Encourage those around you to enrol, offer to drive or accompany people to the polls, do a walking school bus, do a conga line. Crab walk.

Pick up the telephone and call the Prime Minister on 04 817 6801. Ask him if he has read We Should All Be Feminists yet. Cough #doublethequota into his voicemail for four hours.”

“Sadly Auckland Transport’s Executive Board and the Executive Committee can be summed up like this: a group made up almost exclusively of older white guys, who appear to be making decisions that reflect and benefit their own demographic, while simultaneously putting up obstacles in front of groups from other demographics to ensure their own plans are not messed with.”

President Trump reportedly called his fiery conversation with Malcolm Turnbull “the worst call so far” and later tweeted he would “study this dumb deal” to allow into the United States 1250 refugees currently being held in Australian detention centres. To help out student of international diplomacy Donald Trump – and the rest of us – Tracey Barnett explains the background to the deal.

Duncan Greive: Why is The Crowd Goes Wild the only topical 7pm show on during the apocalypse?

“During this January’s period of societal decay and uncertainty, the likes of which we haven’t seen since the Berlin wall remained upright, only one live 7pm show is currently screening.

The Crowd Goes Wild is back and still doing brilliant things on a tiny budget, when its far richer and more important siblings are on an extended vacation. TVNZ1 is airing Purina Pound Pups to Dog Stars, perhaps the only show which can make The Block Australia (airing on TV3) seem like appointment viewing.

Neither can hold a candle to the Crowd, which came in hot and ecstatic and entirely ill-prepared to broadcast.”

Emmaline Matagi: How to dress your pākehā child up as Maui or Moana without appropriating Pasifika culture

Let me just put that out there first and in bold capital letters. Just don’t do it. It is wrong. Painting any fair-skinned child’s skin brown (regardless of their ethnic background) to dress them up as a brown character is never OK.”

Eugenia Woo: The banning of Gal*Gun: Double Peace – a deep dive into the law

“For those who are unfamiliar, Gal*Gun is a game that starts off with you getting shot by Cupid’s arrows and suddenly every girl you know thinks you’re fine as hell. It sounds alright, yeah? Who’d complain about a game that hinges on a bunch of attractive people in your area basically swiping right on you before it was cool?

Well, life comes at you fast. In this case, that was about 10 minutes into the game where it went from cute to what I’d like to think is objectively a bit creepy. First, some girls wanted me to date them. Weird, but cool. Then, they started blushing and lightly hitting me whilst proclaiming their love for me. A bit less cool. Then, the tutorial told me to scan their bodies with a magical pheromone gun (turning their high school outfits transparent in the process) and to shoot them in places like the hips, breasts, and face. Hmm.”

Toby Manhire: The 2017 NZ general election is on September 23. Here are 8 things it may hinge on

The Auckland market is cooling, clearly, for now at least. But the wider story around housing – ranging from the homelessness crisis to the affordability crisis – seems unlikely to fade. Labour and the Greens will push hard on the issue, and though it is arguably not a basis on which property-owning New Zealand is likely to vote, it is hard to find anyone these days who doesn’t at very least have a friend or family members personally affected by the state of housing.”