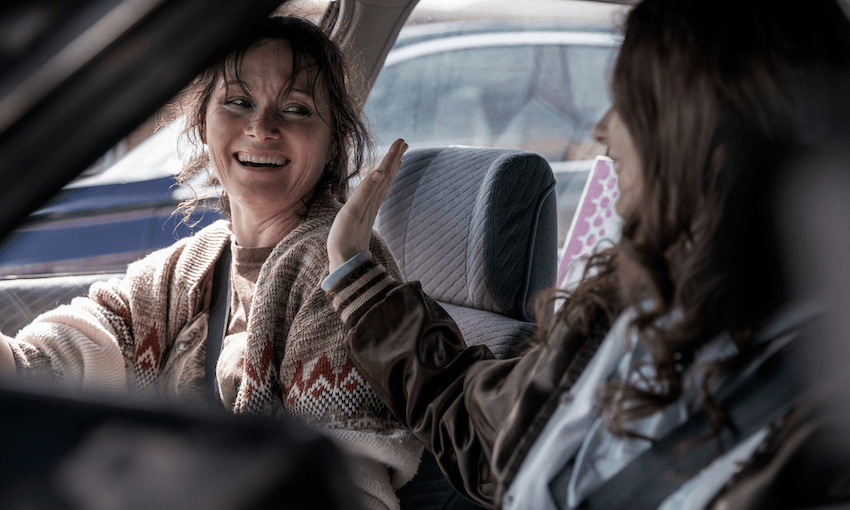 Essie Davis as Bunny King and Thomasin McKenzie as Tonyah in The Justice of Bunny King (Image: Supplied)

Review: The Justice of Bunny King is an engrossing take on a tragic and common reality

Essie Davis as Bunny King and Thomasin McKenzie as Tonyah in The Justice of Bunny King (Image: Supplied)

The simplicity of the plot recalls well-loved New Zealand films, says novelist Rachel Kerr, but The Justice of Bunny King feels like a step up. She takes a close look, moment by moment, at what makes the new movie work.

Bunny King is peeling potatoes when her sister’s partner cruises in.

“Hey do you reckon you could wash my car later?” he says. “You’re just like the best person at washing cars, so.”

“Sure, no problem,” Bunny replies. She has to say yes to this and all the other jobs because she’s staying at their house and can’t find another one. She needs to get a house before she can regain custody of her kids.

Reviewers have raved about Bunny King, using words like heartbreaking, loveable, funny and empathetic. The Auckland City Mission said it made them cry, a high bar surely. Perhaps the thing I liked most about it was the sense that the main character Bunny would probably love it herself. I took a close look to see what makes it work, moment by moment.

For openers, there’s the rhythmic swing of a window squeegee, set to walk-now beeps. A truck toots. Bunny waits at an intersection, the framing of the shot low-slung, relaxed. It’s cinematic, this film. Pink hoodie, maroon puffer, yellow pole and red lights, the promise of action against a grey Auckland sky. There’s tension in Bunny’s face and her sunglasses are budget but she has her chin up. Honk honk! “Hey, hey babe!” she shouts at a tanker driver, and blows a kiss. Monster wheels thunder by and dawn light flares. She and her mates jump between gridlocked traffic to wipe windscreens, dancing to 4 Non Blondes, whirling the squeegees. The camera’s also on the move, restless. She has ideas about how the job should be done – “long strokes”, she tells her young friend. “I’m just trying to raise money to buy two blue pens and a 1B5,” she tells a reluctant driver.

This is a film in the tradition of I, Daniel Blake by British film-maker Ken Loach, with its rage against the welfare system, but The Justice of Bunny King shows more sympathy to workers in frontline roles. In the next scene in the welfare office, Bunny breaks away from her case worker to have an unauthorised private conversation with her daughter in a plastic playhouse, where she promises a birthday party she will spend the rest of the film trying to deliver, all this witnessed by her older son, who is becoming distanced. A case worker is both patronising and helpful and Bunny comes to see both sides. Most of the time she controls her irritation as she’s asked to repeat her basic information yet again. The forces against Bunny are bigger than the behaviour and daily processes of officials in agencies as she lives at the grinding edge of the housing shortage. But she still knows when a real estate agent is fooling her about which way north is, and she keeps her eyeliner razor sharp. Bunny might have her troubles, but like her namesake the boxing promoter Don King, she’s there for the fight.

Bunny is brilliantly acted by Australian Essie Davis, who veers between ingenuity, resignation, anger, forced gratitude and an occasional hysterical sentimentality that reads as a genuine response to being denied the opportunity to care. While she’s borderline too beautiful for the role – a homeless Audrey Hepburn, scruffed up – she’s earned her place with this performance. Her accent wobbles a bit but that reminds us we don’t know where she’s come from – part of her problem is that she’s cut off from her roots. Thomasin McKenzie as Bunny’s abused niece Tonyah is restrained and authentic, a subdued presence off-setting Bunny. Both leads received a special jury mention for “outstanding achievement in acting” at the Tribeca Film Festival. Tanea Heke also shines in a smaller role as the case worker who takes control at the end in a scene made more magical and tragic by Karl Steven’s soundtrack.

The simplicity of the plot recalls well-loved New Zealand films – Graeme Tuckett of the Dom Post mentioned Goodbye Pork Pie – but this one feels like a step up both in terms of character development and craft. Sensitive cinematography by Ginny Loane responds to the changing spirit within each scene, using for example low camera angles to create a child’s view or collapsing into silhouette. Domestic scenes are viewed from adjacent rooms, bringing home the sense of overcrowding or to suggest insiders and outsiders. The full vernacular of low-income life is there, from lace curtains to minky blankets. The panel lights in the welfare office audibly click as they slowly flicker on, leaving a moment’s doubt if they’ll come on at all. Kirsty Cameron is on costume design – some stand-out decisions include the pale-blue pant suit with a patterned pink blouse that Bunny is given as a job-hunting support, which she accessorises with unwalkably high gold heels to limp through the final scenes. Hair and makeup designer Stefan Knight gave Tonyah’s character hair extensions that she could twirl nervously when stressed, which comes to be a signature move. Upscale craft is there but things are also rude and blunt when they need to be:

“She smashed the window! She pissed in my fucking car!”

The writing by Sophie Henderson, of previous hits Fantail and Baby Done, does the difficult work of turning a tragic but common reality into an engaging story, combining elements of social realism and the caper film and making it look easy. There’s a real energy and momentum that adds urgency to the churn of movable factors which might change things. Bravo to first-time director Gaysorn Thavat, who describes herself on Instagram as a Chinese lesbian film-maker, peri-menopausal periodic farmer, self-isolating in a bogan outpost in rural NZ. May this be the first of many.