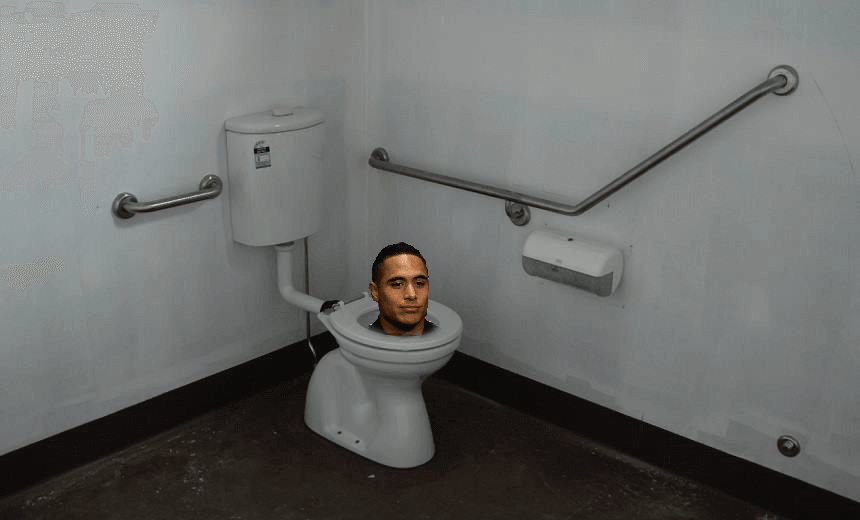 Some key learnings from the Aaron Smith sex toilet scandal

When rugby players make catastrophic screw ups, their bosses like to smooth things over with the public by taking away key learnings. We stole their method and took some of our own lessons out of the Aaron Smith sex toilet scandal engulfing New Zealand.

1. Having sex in a toilet is a romantic experience

Nothing says romance like stained tiling and the lingering scent of someone else’s poo.

2. People who film romantic experiences in public toilets are the very worst

Aaron Smith would’ve gotten away with his secret romance if it weren’t for a pair of self-appointed toilet sleuths. When two witnesses saw the halfback heading into the cubicle with a woman, they refused to do what most people would do and head to another stall. Instead they stood outside for 10 minutes with their young child, making a secret phone recording of All Black sex sounds, then handed the recording over to Stuff.

Who made this couple the Woodward and Bernstein of loo romp investigations? For future reference, these are the steps to take if you ever feel like filming someone having toilet sex.

3. The toilet needs to be in Te Papa

4. Rugby bosses still don’t understand why everyone’s mad at them

Here are a few lessons rugby bosses could have taken from the Chiefs scandal.

1. Don’t put your players’ reputations above a woman’s welfare.

3. In an investigation, it pays to talk to the complainant first rather than last, or not at all.

Here’s what they seem to have taken from it instead:

It took New Zealand Rugby weeks to administer a stern warning to everyone and no-one over the Chiefs incident. But within minutes of muffled sex sounds going up on Stuff, Aaron Smith was sent home from the All Blacks tour and booked for a misconduct hearing. The people in charge of rugby seem to think the public want All Blacks to turn into penis-free sports androids.

If that’s the case, they’re going to be extremely disappointed when they find out about the actions of the All Blacks captain.

The All Blacks will be absolutely livid when they find out Kieran Reid’s also had sex pic.twitter.com/JPohBhAwSQ

5. This will go down as one of the worst days in New Zealand media history

This story turned our media into a pack of deranged sex police, clutching their pearls over Smith’s impropriety. Chris Rattue stopped just short of calling for Smith to be put in stocks in the town square under a sign reading “harlot”. It all culminated with Smith’s sex performance being subjected to Prime Ministerial censure.

6. But some organisations were worse than others

7. Most people, including me in an earlier version of this story, have overlooked the real crime here

Don’t have sex in disabled toilets unless you’re disabled.

8. Christchurch is the perv capital of New Zealand

Whether it’s an office or a bathroom stall, Christchurch truly is NZ’s ‘sex romp’ capital of fake outrage by pervy voyeurs.