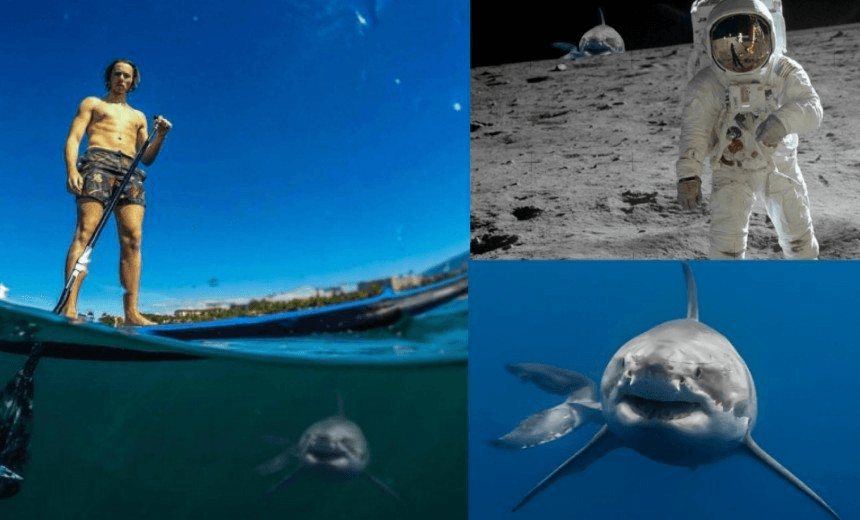 Max Key has come under very mild fire for photoshopping a shark into an image of himself on holiday. Madeleine Chapman looked into the shark’s history and found that it’s been in a lot more iconic photos than you’d think.

On Waitangi Day, at peak social media time, Max Key posted an image of himself on a stand-up paddle board on his social media accounts. After yelling “real men ride women” to a pair of cyclists last year, I wonder where a stand-up paddle board fits on his manliness spectrum. But his choice of water sport wasn’t the focus of the picture, it was the shark swimming just below him that caught people’s eye.

It was impressive and clearly a Great White. Where was he that has Great White swimming? Did the photographer sacrifice him/herself in order to snap this iconic picture that would go on to garner upward of one thousand likes on Facebook? It really was an exciting picture. One you might expect to see under the headline “Man Ill-advisedly Poses At A Downward Angle, But What’s Below Him Will Leave You Speechless.” Max Key, viral hit, megastar, soon to be sponsored by multiple teeth-whitening services.

Until reality hit hard and fast in the form of a photographer who noticed the shark in the photo looked kind of somewhat exactly like a photo he’d taken and published on his flickr account. It’s uncanny. Now I know there’s a harmful stereotype that all sharks look alike but this one really does look exactly like Lucy, the shark George Probst had done a photoshoot with.

Key went on to comment “haters will say it’s fake” in a frankly seamless transition from viral hit attempt to “guys of course I was kidding, come on.”

But in my opinion, he needn’t have backtracked so quickly. I recognised Lucy the shark immediately as well, but for different reasons. Lucy (no last name) is famous amongst serious historians, having been present at several historical events, some even more prestigious than Max Key on holiday.

Conspiracy theorists say there was a second shooter when JFK was assassinated. The only witness they didn’t interview was Lucy. Coincidence? I think not.

Like Max Key above a shark, haters have long said the moon landing was fake. If anything, the presence of Lucy at both events only strengthens the credibility of two equals, Neil Armstrong and Max Key.

Did you know that the film Forrest Gump was inspired by the life of Lucy? Now you know.

Four friends, sharing a bittersweet moment together on national television.

While we were all watching open-mouthed as the Labour party collapsed in on itself, Lucy was holding David Cunliffe up figuratively and literally.

Scarlett Johansson won critical acclaim for her role as Lucy the shark in Lucy.

Haters will say these are all fake. But Max Key and I know better.