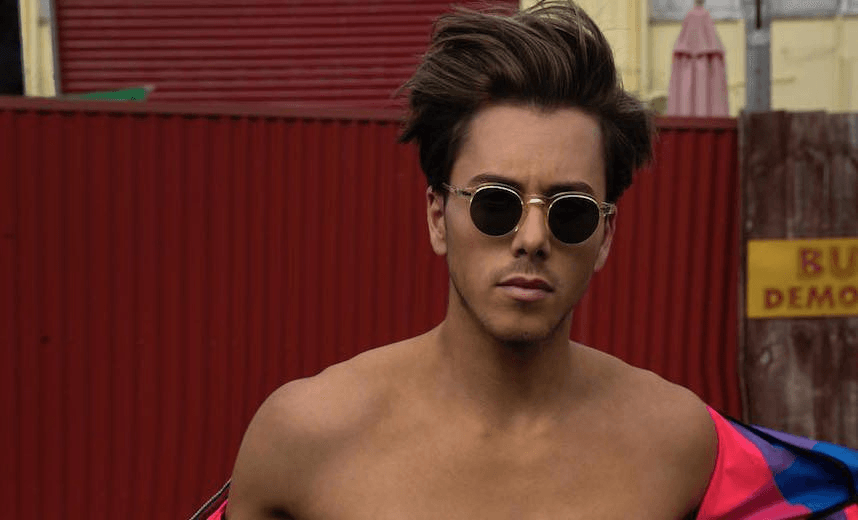 Following the First Son: A eulogy for the Max Key round

Journalist Jessica McAllen looks back at the two years since Max Key broke into the nation’s consciousness and wonders: where to now for the fledgling DJ/popstar/internet celebrity?

I first laid eyes on Max Key across the dancefloor at Auckland’s 1885 club in 2014. He was 19, I was 22. His friend Joshua Troskie gave me the fingers. It was good content at first sight.

Key had recently announced he was starting a DJ duo called Troskey – unrelated to the similarly-named Russian revolutionary – who were debuting at a private Christmas party thrown by the Ya Ya Club, the apparently short-lived club for young Auckland elites. I’d managed to secure exclusive reporting rights, as some journalists had already mocked the gig online, and others were “too old” according to the organiser.

That night was also the first indication that Max Key wanted attention. Before this he was just a background figure in golfing and planking photos with his father; this was an independent venture. Max announcing his DJ dreams was the green light for media to abandon the sacred unspoken pact of not intruding on Kiwi politicians’ families. Thus began the Max Key Round, AKA the new stomping ground for baby journalists.

For the past two years, reporters have checked in on his social media presence with increasing regularity, their efforts rewarded with headlines like: “Max Key Pines Away In Hawaii”, “Max Key’s Photo With Felon” (later changed to “Max Key’s Photo With ‘Felon’ a Hoax”), “Max Key Has Pillow Fight With Model in Paradise”, “Max Key Taunts Car Washing Dad”, “Steal His Style: Max Key” and “Is Max Key Too Famous For His own Good?”

But you don’t amass 57,000 Instagram followers just by being the Prime Minister’s son. There’s a certain je ne sais quoi that a social media celebrity needs and Max Key had it in his extremely finessed online presence. Envy-inducing holidays, extravagant meals and party-ready pool pics helped present him as the ultimate aspirational millennial. While National voters were positively salivating over his father as the classic Kiwi bloke to down a brew with at the barbie, Max was the cheeky Kiwi lad that the UNILAD crowd wanted to down a raspberry Scrumpy with. The 21-year-old got up to mad antics, had hella banter – he’d gone from polo shirts in 2008 to flashing ripped pics in that Remix shoot.

When I met Max at his first DJ set he came across as shy and nervous about performing. He was apologetic about the fact that  I wasn’t allowed to take a photo for the story, and seemed like he just wanted to go about his life. I was fascinated by the crew he mixed with, people I could not relate to in any way other than in their taste for fine cheeses. I was intrigued. Soon I went further into his circle, infiltrating a Ya Ya Club Christmas party and after-party. He was meant to come but was spending time with his then-girlfriend; luckily for me, his friends provided plenty of fodder for the article. They weren’t too happy when it came out, but I didn’t get any hate from Max or his PR. Not yet.

It’s easy to see any media attention lavished on a politician’s child as an invasion of privacy. They didn’t ask for their parentage, after all. But Max has often used those intrusions for personal gain. Whether he is simply making the best out of a bad situation is an open question. Most likely, he is just fulfilling the dream of most modern young twentysomethings: getting attention on the internet. After all, it wasn’t a journalist who caught him proclaiming that “real men ride women” to passing cyclists from his car. He recorded and posted it to Snapchat of his own volition, on an account he regularly promotes.

So what now? Maybe with John Key’s departure from politics, the media will back off Max Key. He can be left in tufts of grass to play golf alone, to drink at Britomart Country Club without a revolving cast of people asking for photos. Left to his own devices, perhaps his true musical genius will emerge.

On the other hand, look at all the notoriety he amassed in the capacity of being the Prime Minister’s son. Without the constraints of awkward security guards and over-cautious press advisors, the celebrity and DJ might yet be liberated.

Calum Henderson: ‘I wondered how much he’d charge to do a wedding or birthday’ – A review of Max Key’s George FM debut