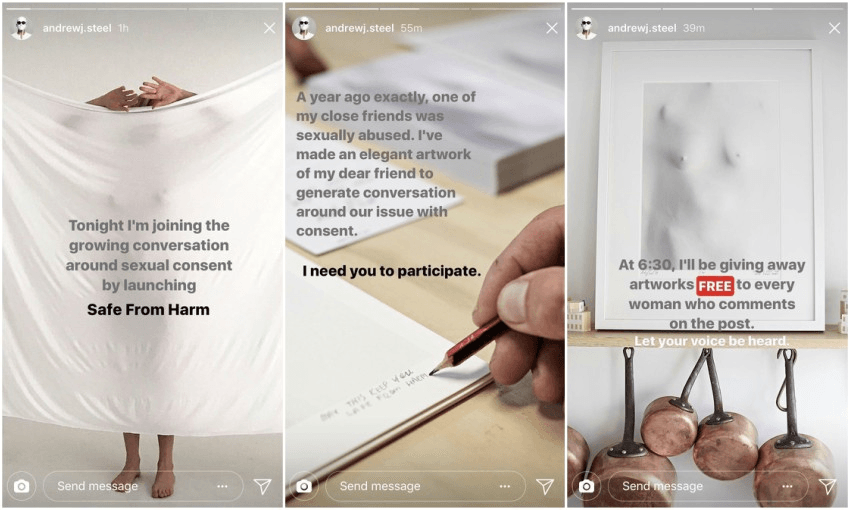 Andrew Steel and the mystery of the vanishing consent campaign

Auckland artist and influencer Andrew Steel recently debuted a major work about consent. The post blew up then, just as quickly, disappeared.

On January 22 Auckland artist Andrew Steel announced his latest work “Safe From Harm”. It debuted as a series of photos on his Instagram account, with accompanying text which encouraged women to talk about consent and why it’s cool. Within five hours it had attracted 2,400 likes and almost 900 comments, with Fashion Quarterly promoting the project to their 35,000 followers.

Its viral success was short lived, however. Within 48 hours, Steel had taken down his original post, closed the official Safe From Harm website, and wiped his personal website.

In the now deleted post, Steel wrote: “I’ve produced a 45-piece limited edition artwork of one of my closest friends released exactly one year on from her sexual assault.” The artwork, in collaboration with photographer Matt Queree, “aspires to serve as a symbol of empowerment for woman [sic] and much needed learning for men.”

The work portrayed a naked woman with her head, legs and arms cropped out, covered in a white sheet so that her breasts and hips were outlined.

An inscription on the bottom right corner read: “May this keep you safe from harm”.

Steel is a commercial artist and creative who started in graffiti before moving into work with major brands, including Nike, Air NZ, Nespresso, Resene, and Samsung. His influence, whether promoted or otherwise, is far reaching on social media and his work highly sought after. With more than 27,000 followers, Steel successfully leverages Instagram and the visibility of his brand collaborations to sell work outside of a gallery setting.

Steel’s plan was to give prints of the art away free “to all women who comment on this post why they think consent is cool and crucial.” As for the men? “Read the comments. Tag in friends, favourite brands.”

While there were hundreds of comments doing just that, there were also dissenting voices. Some women questioned an approach and aesthetic which seemed to be encouraging them to look at some boobs without a voice or story – and then to explain to men why not raping women is a cool thing to do.

If you skim-read the block of text, as many do when scrolling through Instagram, it has all the right keywords. ‘Safe’,’sexual assault’, ‘women’, ‘consent’, ‘crucial’. Those are important words when discussing sexual assault.

Perhaps six months ago, such a campaign may have attracted almost universal acclaim. But the #MeToo movement has shifted the axis. The mood in 2018 has changed. It is not so much the buzzwords as the other words that are the problem – and it didn’t take long for many women to let Steel know they thought he’d misfired.

“A successful white male is gaining recognition off his campaign featuring a nameless, faceless female body,” wrote one commenter. “[And] wants women to write essays just so men don’t have to think for themselves about why something as basic as consent is a good thing?”

Others questioned the appearance of self-promotion: “There is something so wrong with this,” one woman commented. “The way he encourages you to tag ‘favourite brands’… he wants to push his own brand on the back of someone’s sexual assault experience.”

Several commenters questioned Steel’s suitability to front a campaign centred on women’s experiences. The woman in the photo wasn’t credited (though that may have been at her request – the Spinoff’s attempts to seek comment via Steel have been rebuffed, of which more later) and her story wasn’t told.

As more women joined the discussion, many noticed that negative comments were being deleted. By the end of the night, Steel had removed the suggestion to tag in your favourite brands. Fashion Quarterly, who had promoted Steel’s work with a glowing endorsement of the cause, deleted their post soon after. The next day, Steel’s original post was removed. As of writing, the link to the website for the work leads to a blank page. Andrew Steel’s personal website is also blank. Any negative comments about ‘Safe From Harm’ or Steel himself on previous Instagram posts have been regularly deleted.

The Spinoff asked photographer Matt Queree, who has collaborated with Steel on a number of projects, to comment on his role in ‘Safe From Harm’ and his thoughts on the reaction. Within 45 minutes, a law firm acting on behalf of Andrew Steel emailed the Spinoff with a letter. The letter was marked “confidential” and we won’t publish its contents. However we can say that it didn’t include any substantive response to our questions.

A few days later, the Spinoff sought comment from Mr Steel about the process involved in creating the sexual assault awareness campaign and whether any women were involved. The Spinoff also asked why the post was removed. Soon after, a second letter from Steel’s lawyers was received. Again, the letter was written on a confidential basis and again did not respond to the questions we had asked.

A look back through Steel’s previous work shows this isn’t the first time he’s used the naked female body in his art. A mural entitled Karma Sutra II consisted of dozens of cartoon bodies in various sex positions. A recent series, “BodyLandscape”, had Steel paint New Zealand landscapes onto naked women’s bodies, which were then photographed by Queree. He painted an interior wall with everyday household objects and animals which involved a naked woman blending into said wall.

As well as his use of the naked female body in his art, Steel has expressed a fascination with sex in several interviews. When asked in 2016 why he chose to paint a wall mural filled with karma sutra poses: “This is something that’s personal to me. It’s something I wish I could do all day every day. But I can’t so I have to make artwork about it.”

During the same interview, Steel was asked for his life motto. “Have fun full stop. Have sex full stop.”

Asked in a different interview “what’s something about you that Google doesn’t know?” Steel said: “I’d quit anything for sex. Art’s merely a mechanism to get more sex.”

“Safe from Harm” was Steel attempting to start a conversation, though women telling men that non-consensual sex is rape is hardly a dialogue. But by deleting negative comments and then the entire project, Steel unwittingly started a whole different conversation. A conversation about the right and wrong ways to talk about women’s issues.

There’s no concrete set of rules to being a feminist ally but let me offer some free advice: don’t ask women to do the work for you and then silence their voices when you don’t like what they have to say.