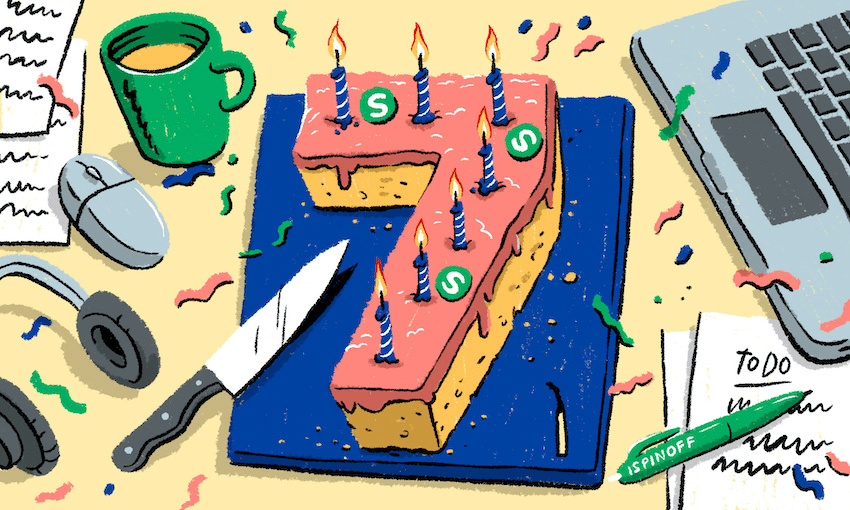 The Spinoff turns seven today, and we couldn’t have made it here without you

Delta may have interfered with our plans to mark the big day, but making it to seven is a huge achievement, writes founder and publisher Duncan Greive.

Today marks seven years since we hit publish on the first post on The Spinoff. Back then it was just two people, both still here, somehow, and our focus was squarely on television. I look back on those days – writing this in bed, as the delta lockdown enters its fourth week – and am charmed by the naive confidence with which we carried ourselves. We knew almost nothing – had no social media strategy, no research, no sales expertise, no clue about anything, really.

We could see as far as our lone commercial deal extended, which was a year, and had the freedom to write to entertain and inform within our chosen area. At the time, just making it to a year seemed like it would represent a bizarre and unanticipated outcome. But seeing as we had that time and freedom, we decided to just make use of it. We approached writers we loved but thought we had no shot with, like Rose Matafeo, who went on to global stardom, and Toby Manhire, who eventually became our editor. We made a series of odd videos with David Farrier (which hold up imo), killing time before he made Tickled. And we debuted our first podcast, the brainchild of Jane Yee, who now runs podcasts for us.

Looking back today, I love the audacity of it. The way we turned the low stakes into an advantage, and an audience found us despite our best efforts, embracing us as we were: having fun figuring it out as we went. That still feels like such a critical part of who we are as an organisation, and of our relationship with you, our audience. That sense of closeness, of listening to you as well as talking to you, has helped shape us in incalculable ways. Most importantly through The Spinoff Members – allowing our audience to donate to us is the single most important decision we ever made, and the only reason I am writing this today. Now it’s the single most important source of funding we have. Without it, we wouldn’t have survived last winter. Back in level four lockdown in 2021, we’re again facing budget challenges, as reliant as ever on the support of our audience.

The seven years we have been around is also, coincidentally, precisely how long NZ On Air has been running its fascinating and revealing “Where are the Audiences?” research (head here for my analysis of the latest instalment). The project charts changes in our media consumption over the entire period of The Spinoff’s life, one that has seen a drastic drop in traditional media audiences, particularly among younger people, with that behaviour replaced by a complex web of online consumption. We have tried to follow audiences to where they live, and maintain a strong presence on YouTube, Facebook, Instagram, Spotify, Twitter and even LinkedIn (!). Some might find us only on or through those platforms, and we’re fine with that.

Still, we always wanted The Spinoff to appeal to a psychographic, not a demographic – so while our audience skews a bit younger than most mainstream media, we also love the fact that our readership among people over the age of 65 has grown hugely over the past 18 months, and they now make up a large share of our members. The Spinoff was not designed to appeal to a neat audience segment, instead being much more about an energy, a kaupapa, a broad vision for Aotearoa and the world (while acknowledging that we won’t all agree on the best path there – and that’s fine too).

In recent years we have grown as opportunity and instinct have allowed us to. We made a bunch of podcasts, a TV show on Three, and a bunch of web series, some of which won awards. We published a book with Penguin. And we created two sister organisations in Hex Work Productions, which makes video, and Daylight Creative, a content studio that works with other organisations.

We also grew our scope considerably, with Leonie Hayden creating The Spinoff Ātea in 2017 to honour Te Tiriti and cover te ao Māori within The Spinoff. There have been a large number of other verticals along the way, including politics, business, social issues and much broader cultural coverage. The latest project is called IRL, exploring the intersection of the internet and people’s lives, which Maddie Holden introduces here. Our team of writing and editing staff expanded from two to 20.

Today was supposed to be a huge day for us. On our seventh birthday we had planned one of our biggest changes yet – with Toby Manhire stepping down to hand the reins to Alex Casey and Madeleine Chapman, two wāhine who have been as strongly associated with The Spinoff and its rise as any individual. The pair even started doing some promotion, appearing on RNZ’s Saturday Morning for a very funny and thoughtful edition of Playing Favourites.

Then delta came for our best-laid plans, as it did for those of so many others. As a result, Toby has stoically agreed to continue his fantastic period as editor for a few more weeks, leading his team into covering this very tricky period with his customary poise and vision, so as to allow our editorial transition to happen when we’re out of lockdown. The staff party we had planned has been put on hold, and the day feels disappointingly like any other.

But it’s not. I’ve heard seven years talked about as a milestone in any organisation’s existence – proof that you’re built to survive some storms, and a point at which people understand who you are and what you’re about. It certainly feels like that today – like we have overcome the long odds that greeted us when we first flicked the switch, and become a small but singular part of the media in Aotearoa.

Today, I want to thank everyone who has ever worked for or contributed to The Spinoff or its siblings. This has been a collective effort, the ideas and instincts and hard work of many people, always in motion and evolving each day. This job is hard; communicating to large audiences can be both exhilarating and exhausting, often in the same day. I’m consistently awed by the creativity and purpose of those who work here.

I also want to thank our audiences – everyone from those who bought into our commercial partnerships, which remain different to what others offer (ask us how), to those who have read and shared our work, to the deadset legends who have supported us through Members (and if you aren’t signed up and want to make our birthday, please consider doing so today). Without an audience, any form of media is doomed, so for all those who have consumed our work over the past seven years, a huge thanks from all of us here.

This day might not have dawned the way we planned it, but it’s a special feeling for us all to have made it here all the same. Anyone reading this had a role in it, and we’re all very grateful for that.