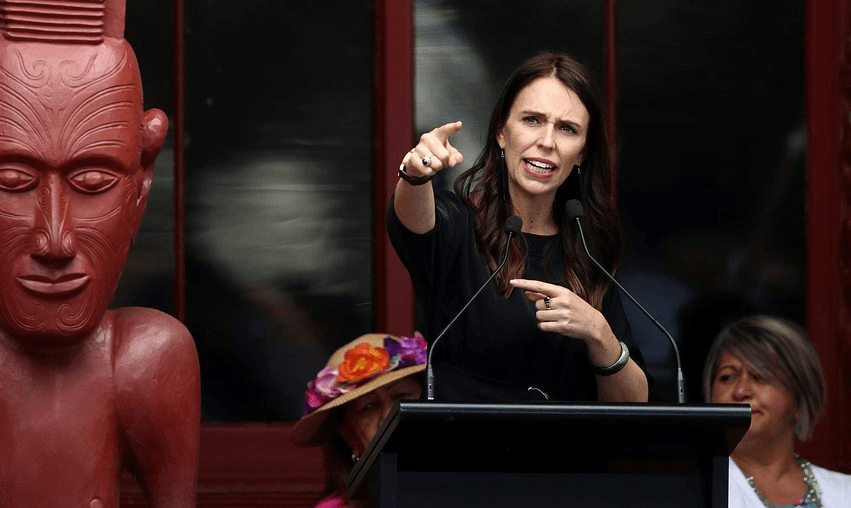 Jacinda Ardern: ‘I want to be able to tell my child I have earned the right to stand here

“And if we value that about ourselves as a nation 364 days of the year, why would we not value it here at Waitangi. I will always maintain that we should not seek perfection on our national day. That speaking frankly and openly is not a sign of failure, but a sign of the health of our nation and a sign that we must keep pushing to be better. I also hope that my child will know that we have the power to change and we must change. A kaumatua spoke about the differences between these two whares on these grounds, and if you ask me the distance between this whare and the old homestead is the difference between us as people, the inequality we still have.”

Charles Anderson: The most badass photograph ever taken in New Zealand

“The Nelson Provincial Museum describes it thus: ‘Full length outdoor portrait of 17 men outside a hut in the bush in theatrical poses depicting leisure activities. Props include boxing gloves, a button accordion, a mandolin, a penny whistle, Truth newspaper, alcohol, and a shotgun. One of the men appears to cut the hair of another.’

I took a photograph of that photograph and stored it away as a curiosity. But it stuck with me.”

Christopher Penk: Labour ministers are bending the branches of government to breaking point

“‘It’s lovely to be with you tonight,’ said Hilary. I believed her. I believed her all the way to the back of her craft beer fridge, and all the way to the bottom of that pile of bargain Whopper burgers she bought on Twitter that time. Jeremy, on the other hand, had a distance behind the eyes like an alien in Men in Black that’s trying to pass as a functioning member of society. It was especially ripe whenever we returned to the studio after a segment. Hello darkness me old comrade, we meet again.”

Madeleine Chapman: Andrew Steel and the mystery of the vanishing consent campaign

“As more women joined the discussion, many noticed that negative comments were being deleted. By the end of the night, Steel had removed the suggestion to tag in your favourite brands. Fashion Quarterly, who had promoted Steel’s work with a glowing endorsement of the cause, deleted their post soon after. The next day, Steel’s original post was removed. As of writing, the link to the website for the work leads to a blank page. Andrew Steel’s personal website is also blank. Any negative comments about ‘Safe From Harm’ or Steel himself on previous Instagram posts have been regularly deleted.”

“A senior source at the NBR told the Spinoff the controversial passage was ‘part of a wider column which was clearly satire’, but it caused ‘misgivings’ among staff. The source said that had it been ‘one piece, just on that topic’ the NBR would not have run it. Editors had, however,  ‘listened to feedback and responded’, and now regarded its publication as an ‘error of judgement’.

In what appears to be a different version of events to Jones’ statement that ‘I shan’t bother writing any more for NBR’, the source at the publication said the decision to terminate the column was made at its end, and communicated with Jones in a telephone conversation.

A separate NBR source told the Spinoff that ‘Approximately 100% of NBR editorial staff’ would approve of the column’s discontinuation.”

“It is not for Māori to behave to make anyone feel better about justified and reasonable demands for equity. The onus is not on Māori to smooth the path for others to come into their home; a home that has been, figuratively and literally, systematically dismantled and destroyed over decades. Labour too has a lot of ground to make up, so it’s good that Jacinda Ardern spoke with verve and hope for a more equitable partnership. Her warm reception reflects the historic grassroots support by many Māori for the party, the ongoing excitement around the prime minister’s leadership, but also her pregnancy. New life is sacred, protest would have felt awkward in what is still a honeymoon period for Labour. The absence of significant protest honoured that new life.

But it did not signal some supposed maturity on the part of Māori where they have seen the light, the error of their ways, or organised themselves to be better hosts to the Crown contingent.”

“The promotional material in the lead-up to this album gave the impression Justin would be going back to his roots (he was born and raised in Tennessee), giving us the same folk/country schtick that went pretty poorly for both Miley Cyrus and Lady Gaga. It seemed like it’d be the music equivalent of when a stand-up comedian does a show that focuses on ‘storytelling instead of jokes’. But Man of the Woods turns out to be the music equivalent of when a stand-up does the same old dick jokes, just more lazily than ever.”