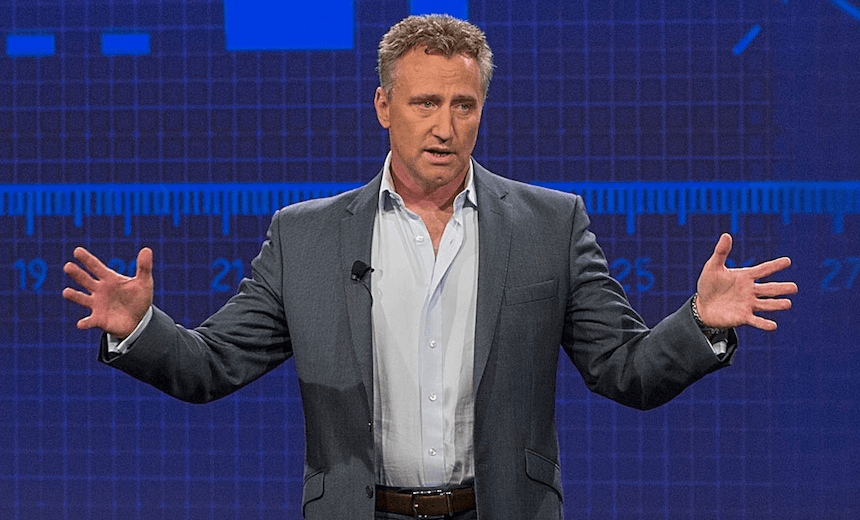 By Stuart Rutherford
Guest writer
Made possible by

“Our company is gonna be thiiiis big”: Mark Weldon on stage in Auckland on October 30, 2014.
Opinion

The Spinoff has been accused of being anti-Mark Weldon and his work from time to time, so we thought we’d get one of his defenders to make the case for him as a misunderstood visionary. Here is ZenithOptimedia’s Stuart Rutherford, arguing Weldon reshaped MediaWorks for commercial success at a time of great upheaval in the sector.

Seven hundred million dollars. Not your typical Powerball win. A significant amount of cash, it’s also a significant amount of debt, and it is the key to understanding why Mark Weldon’s tenure at the helm of MediaWorks is far from the unmitigated disaster some recent headlines have suggested.

The recapitalisation of MediaWorks two and half years ago, salvaging the company from $700m in debt, no doubt provided the new CEO and board with 700 million new reasons why strategically they had to execute tough commercial decisions.

More than enough has been said about the impact of the decisions by Weldon and, presumably, the board, in relation to the culture of MediaWorks and in particular the newsroom. Lost in the fallout, however, has been much in the way of assessing the merits of many of the company’s strategies delivered under Weldon.

Weldon’s controversial two-and-half-years, and his $700 million challenge, can only really be understood when set against the wider turbulence of the sector. To say the media environment is unsettled would be a major understatement, as most boldly illustrated this week by the push for a Fairfax-NZME merger. New models, new partnerships and new yet similar strategic decisions are being sought and executed across the leading media companies in New Zealand. A consolidation of resources (newsrooms and sales teams) is being largely coupled with the introduction and diversification of new revenue streams across digital platforms, data services, content production and even event management.

And while those of us who work as marketers and media-buyers can appreciate the broader business strategies and innovations that media companies are seeking to employ, much of it, in this fragmented, multi-channel environment is simply running to stand still.

Half year results from Fairfax showed revenue down 7.4% and EBITDA down a further 11.9%, despite the many new innovations the company has delivered, particularly in the digital space. NZME, which has been through its own period of significant disruption and change, also losing a CEO in the process, delivered a full-year result largely flat year-on-year. TVNZ’s first-half net profit result also showed a decline, down a notable 36% ($7m) off the back of a modest decline in advertising revenue. Sky TV, too, despite growth in both total and advertising revenue posted a half-year result at the end of last year down 5.5%. It’s tough out there.

While the Advertising Standards Authority has chosen to cease publication of the much-debated annual reported revenue numbers, it’s fair to say in NZ our advertising revenue is growing at little more than 3-4% annually. Advertising budgets are largely flat and more often than not derived as a percentage of sales, and as such accountability is arguably the crucial KPI that chief marketing officers are demanding. That is another reason why digital solutions continue to storm ahead and take more dominant shares of advertising spend: it’s not digital at the heart, it’s digital at the start – and everything else can get in line.

The numbers are frightening in such a small market. The Internet Advertising Bureau’s reported total digital spend increased in 2015 to $800m, a 20% increase year on year. Search marketing alone accounts for $447m. This is no small beer, especially when you consider that NZME’s 2015 revenue was $433m and TVNZ and Fairfax half-year combined revenue was $350m.

Digital is now the largest revenue channel in a relatively flat market. The rest of the players have to scrap it out over an ever reducing pot. It is a runaway train that traditional media ownersare desperately trying to hang on to. When you run a company with TV channels and Radio stations at its heart, the challenge is pretty bloody stark.

Not unlike the situation at NZME, Weldon was first faced with the need to take separate business silos and unite them under one commercial entity. While some of the fallout was aired publicly, the undertaking to work through was deemed necessary to bring the financials of the company together. Newshub now appears to be the consistent brand glue that holds the TV and radio – oh, and digital – brands together, a first in the NZ market.

Like Newshub, Paul Henry’s arrival at breakfast was also welcomed as a New Zealand first, if not a world first. The combination of online streaming, TV and radio is now being investigated by several international brands keen to learn from MediaWorks. The simulcast thinking is not new to TV3, who years ago were first to come up with the smart idea of simulcasting 3News on Radio Live at 6pm, perfect for listeners like me who so enjoy sitting in Auckland’s traffic for hours.

Other network properties under Weldon’s reign have largely been a success designed to attract greater viewer numbers and increase yield. Continuations of The Block franchise, NZ productions of Grand Designs, Family Feud, The Bachelor, Jono & Ben, Westside, Story and of course Paul Henry. On the whole the station has held share and has consistently designed a market ratecard to attract efficiency.

Weldon’s involvement and drive to establish the programmatic KPEX offering should also be noted, as he played a key role in helping to bring this to market. Launched in November 2015 KPEX is a joint partnership between TVNZ, MediaWorks, Fairfax and NZME to help market their online inventory programmatically.

MediaWorks radio properties have always been the less public success story, and the most recent survey resulted in a new milestone for the company with more the one million listeners in the key breakfast time slot – admittedly a new methodology with an increased population base. That doesn’t change the fact, however, that reaching a millions kiwis before 9am is compelling to radio advertisers.

The networks digital offerings and 3NOW on-demand service continue to grow and the many formats and advertising opportunities the business has created are certainly appealing to advertisers as the scale of the offerings increase.

The success of Bravo, via a partnership that Weldon pulled off with NBC, another first of its kind outside the US, remains to be seen. The programming line-up will clearly attract the Bachelor crowd while a local version of Real Housewives, will no doubt provide fodder for the glossy mags.

Now we wait patiently to understand the financial performance of the company. In a statement only a few weeks ago, Weldon indicated that the business was in “the best shape it has been in recent times”, which was backed up by a further $50m capital contribution. We are told it has met its first-quarter targets.

On reflection the MediaWorks we have today is commercially in a stronger place than we had two years ago and the business offerings are certainly better equipped and future-focused.

For all the financial stability that Weldon won’t be remembered for, MediaWorks, like all our local media companies, are up against it. The growing realisation, however, is that while they battle and partner with each other, global media brands such as Google are Facebook are chomping on their share of the local pie and revolutionising the structures in which our local companies must operate.

Weldon and his decisions were about offsetting this – reshape yourself or be reshaped by your competitors. As others have commented, largely the strategy was right, he just wasn’t the guy to execute it. It would appear the old adage, “Culture eats strategy for breakfast”, has again proven true.

Interestingly, however, if MediaWorks, and the Newshub team in particular, can reinvigorate their well publicised culture within the strategic framework that Weldon has left behind, there is every reason to hope for sustained success in the future.