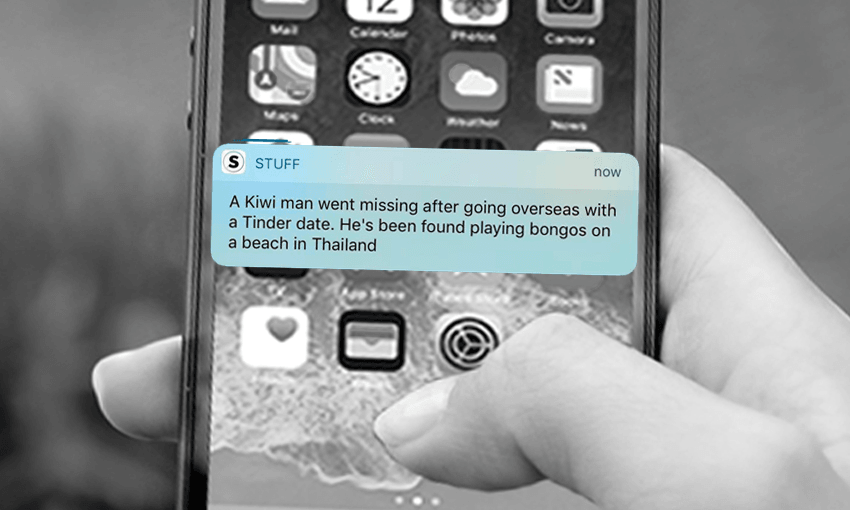 Originally conceived to notify you of important breaking news, news alerts in New Zealand have morphed into something altogether stranger. David Farrier reports.

I’ve been in America a lot this year and it’s felt like I’ve slowly been descending into madness. I’ve found myself in a dark place where each day I’m reminded that the world is a terrible place full of terrible things.

But the reason isn’t the latest outburst from Donald Trump or the never-ending parade of despicable, disgusting men in Hollywood.

“Gosh, I hope the family gets to read that on their phone,” I thought to myself.

My next thought was, “Haven’t I read this story before?” Turns out I had, over two years ago:

New Zealand news media organisations are certainly not alone in their eagerness to generate clicks. The world over, news services are honing their skills at creating the most clickable alerts and headlines.

But here in New Zealand we have our own, truly special flair for it. The stories are darker, somehow – exploiting our fears of pain, mortality, and what comes next.

Often they read like a very short episode of Black Mirror: bleak, with a smattering of dark humor to make it more palatable:

I waited all day to find out how that story ended, but there was no news alert to tell me. For all I know, that child is still in the ceiling, scampering around in the walls, eating dead flies.

If you’re a small child, chances are you won’t fare well in a New Zealand news alert.

Quotes are often used to add a level of authenticity to a New Zealand text alert. Sometimes their spoken words, sometimes they’re text messages, complete with a :-)

The logic goes that we all want to vicariously watch other people die, while we sit safely tucked by the sidelines.

We don’t want to feel informed or to learn; we want to be reminded that we’re alive. That we beat death. “Ha ha ha, look at those poor dead sods!” we shout.

They come thick and fast. Sometimes not an hour goes by before we’re informed of another death. Children, adults, it doesn’t matter.

I turned my news alerts off about a month ago. It got too much.

I turned them back on last week, only to receive news of the body bag falling out of the hearse.

I turned them off again.