Move over Simone Anderson, Clarke Gayford has put away his fishing rod and replaced it with his phone… and a sheep? Stewart Sowman-Lund explains.

The world of sponsored content is murky at the best of times and downright insane at the worst, with smiling influencers selling everything from teeth whitening kits to Covid-19 conspiracies.

Thankfully, there’s a new influencer in town, and his name rhymes with Dark(e) Hayford. Yep, the prime minister’s husband-to-be Clark(e) Gayford is the latest to jump on the influencer train to dollar sign town.

Except, based on this attempt, he probably needs to work a bit on his influencing.

When The Spinoff stumbled across the following post on Instagram, it sent a confused ripple throughout the office. What is going on?!

It’s weird enough to see Clarke Gayford indoors and without a fish in sight. But that’s not the only thing off about this foray into the world of social media influencing.

At least three people in The Spinoff office were shocked at what they thought were several large, folded pieces of multicoloured ham sitting on Gayford’s bench/ironing board.

See the following diagram for a closer analysis: 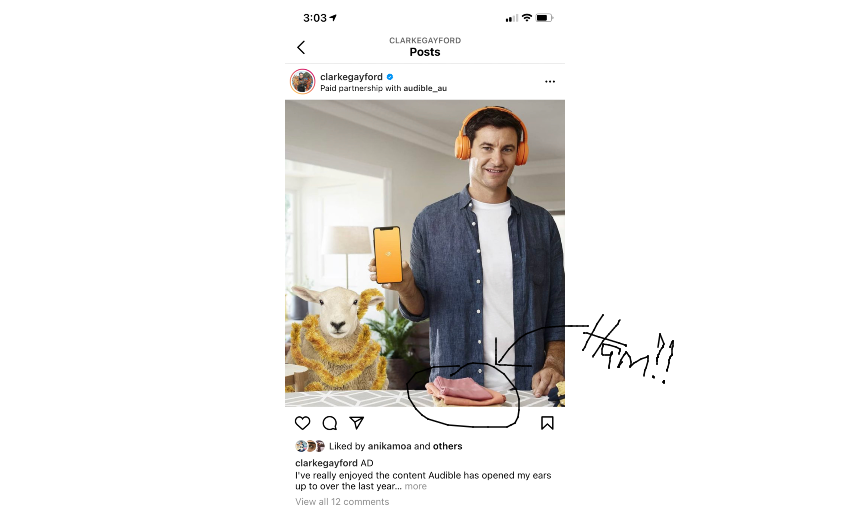 Those are the largest, flappiest bits of meat I’ve ever seen – and who folds it up and puts it straight on the bench? Instagram was very confused.

Upon closer inspection, it’s possible the “ham” is in fact a pile of fleshy tea towels, but I’m not convinced. Gayford knows his way around a fish, and we’ve seen what he can serve up to people on election night. If I was that strange tinselled sheep, I’d be worried.

Why is there a strange, tinselled sheep?

This one probably doesn’t need a diagram.

I don’t consider myself a Christmas expert (or even much of a Christmas enthusiast), but I don’t remember ever decorating a live sheep before (although based on the way this particular creature seems to follow you wherever you look at the screen, I’m not sure it actually is alive).

It’s definitely possible I’ve missed some strange New Zealand Christmas tradition, but I’d say it’s more likely Audible decided a sheep was the most relatable way to enter the Kiwi market (cause, of course, we all own a sheep and live in Hobbit holes etc etc etc).

Has Clarke Gayford even listened to an audiobook?

I understand the struggle of trying to get the pose down when taking a ‘gram, but let’s take a moment to talk about Clarke’s slightly gormless expression. Maybe I’ve got the wrong end of the stick, but I get the distinct impression Clarke has never listened to a single audiobook.

Let’s dissect my thesis, starting with his caption. “I’ve really enjoyed the content Audible has opened my ears up to over the last year,” writes Clarke, tactfully choosing not to name a single piece of “content”.

Then there’s the image itself, in which Clarke shows off his favourite piece of “content” – the Audible logo. 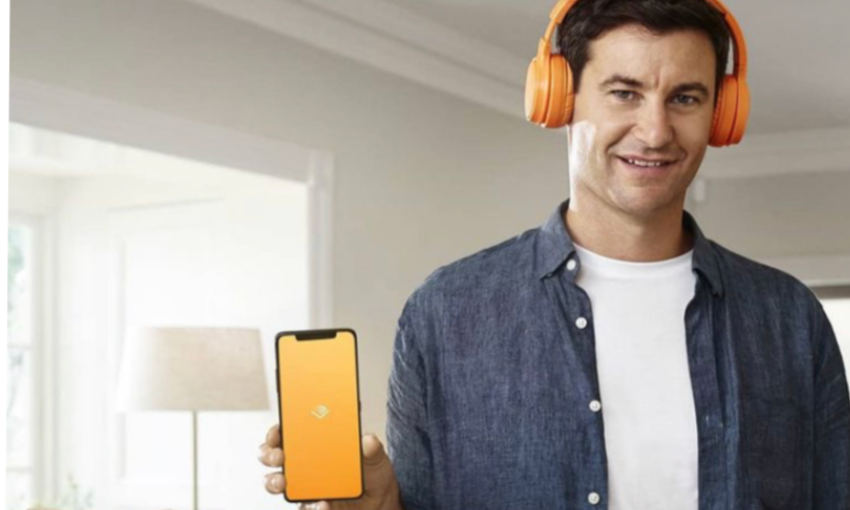 Ham and sheep aside – why is Clarke Gayford advertising Audible?

Look, I’m sorry to be a prude, but does something feel off about the prime minister’s fiancé standing in his lounge next to a sheep covered in tinsel and a pile of discoloured ham taking a photo to advertise… Audible? As in the audiobook company owned by… Amazon. As in, the company founded by Jeff Bezos, the richest man in the world. As in, the company famous for avoiding its tax obligations. As in, the company notorious for underpaying its workers and making them work in terrible conditions.

Ethics aside, does our first bloke need some extra cash? ‘Cause if so, I have a garden that needs weeding and a house that needs cleaning. Hit me up in the DMs, Clarke, I’m on Instagram too.