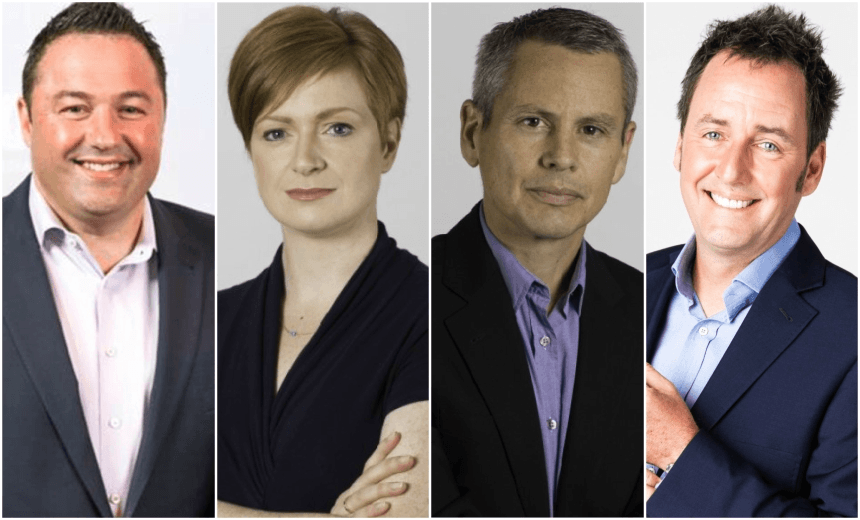 The radio survey results are out – and everyone won, again!

Every time the radio survey results come out we get the same amazing news: everyone killed it! Duncan Greive reads the press releases and tries to figure out what’s really going on.

The fact that all media is ridiculous and horrible is no longer debated by serious people, but even among the humiliated denizens of our once-glorious industry, radio remains an island of depravity – a kind of godless media Ibiza where every citizen is oily and suspiciously tanned and pulling a funny face despite being 108 years old.

The reason we, the snobby and elitist ‘rest of the media’ continue to tolerate the goons of radio is that they are the only part of the failing media which is not in fact failing. It is a shocking but potentially true alternative fact that radio is the only branch of the mainstream New Zealand media tree which is consistently and reliably profitable in its own right, keeping the sweet sap of cash in our rotting boughs and allowing us to carry on pretending that there is demand for our ‘services’, such as they are.

Government institutions play the chainsaw-wielding maniac in this over-extended metaphor, with the Commerce Commission torturing us by refusing to allow us to merge our paltry assets to try and eke out a few extra months on this earth. Because competition in printed newspapers really matters when you spend a full calendar year thinking about it.

So while it’s easy to gaze in horror at radio, with its stunts and tightly controlled playlists and objectionable opinions, let’s take a moment to be thankful to the medium for its generosity in allowing many of our largest brands to continue to struggle through the post-internet nuclear media winter in the hope that one day it will pass. Long may it continue – though if Australian reports of Southern Cross Austereo interest in NZME’s radio assets accelerate into the ‘actually happening’ space then it may not continue for long, and we may be in deep(er) trouble.

Anyway, the reason radio remains so resilient is that people stubbornly continue to listen to it for literally hours on end, thus making it attractive to advertisers, while the costs of its production are basically a few humans, two microphones and a small black plastic box with a piece of string tied around it running up to a telegraph pole. (I have not worked in radio but am pretty sure this is how it’s done.)

Twice a year the radio industry is surveyed by a group calling itself GfK, which sounds like but is not a group of Russian hackers. I was once selected to complete the survey, so can speak to its methodology at the time. It was thus: they sent out a booklet with every radio station in the city on the y axis, and a long time (at least a week, maybe two) on the x axis, broken down into 12-minute intervals. You were meant to keep a diary of your listening habits during that period, and return it to them. It was a very full on task which I can only imagine that everyone receiving a survey completed without fail or fault.

It has apparently evolved somewhat since, according to an industry source, and now includes some online surveying – I have contacted GfK to ask about current methodology but have yet to receive a response at this time.

Anyway, that period has recently passed and the results are in. And, as witnessed in the shrieking headlines italicised above, everyone killed it. Everyone! Seriously, everyone.

Even within the bizarro world of press releases, those for radio survey occupy a singular position. The combination of the immense amount of money the survey directs and the fact they’re put out by huge media organisations means that both the releases and the reporting on them are some of the most brazenly obfuscatory ever put out. They’re almost impossible for a layperson to read and designed only to make advertisers feel like organisation A deserves a greater proportion of their dollars than organisation B.

Nothing displays the bewildering segmentation which occurs between markets than the volume of asterisks and other markers used to identify the claim being made. I mean, what the fuck is a ɸ and where else would you ever see it apart from a radio survey press release?

While each matters, given the relatively small number of surveys distributed and large number of stations and timeslots discussed, it’s a given that the more finely divided the data the less sound it becomes. It means that whatever you’re reading, while each claim is based on a real number, it’s almost never a direct like-for-like comparison with an opposing station. For example, MediaWorks proudly beat its chest over The Rock’s position as “the number one music station***”, based on its 428,500 “nationwide listeners”, placing it “equal with The Edge”. This is strange, because just a paragraph earlier we were told that “The Edge retains its title as New Zealand’s most popular station with 662,300 listeners”. It’s… confusing.

Worse, GfK’s own website seems – and likely actually is – purposefully designed to make dispassionate analysis a horrible experience. The average page looks like this:

Finally there’s RNZ, the station I listen to most, which does a more sober and considered version of the commercial radio networks’ releases, a full week later under the terms of their agreement with GfK. What to make of it all? I tried to close-read the three releases and bullet point what seem to be conclusions able to be drawn from the surveys.

1. RNZ’s move to join the survey appears vindicated. RNZ National’s weekly cumulative audience was measured at 579,400 listeners, up from 535,200 last year. It’s a lot, and seems like vindication of Paul Thompson’s open content stance and major rejuvenation of key shows. Every major property recorded an increase, a seriously impressive result after the grumbling which accompanied the moves initially.

2. The general sense is that it was a good result for NZME after a bad run. “They call it the ‘jaws of death’,” one radio insider unaffiliated to either network told me. “The way the 25-54 demographic had been swinging to MediaWorks. That’s been incrementally reversed.”

5. The most intense battle is for the hearts and minds and brains of the morning news listener – particularly in an election year. NZME and its reported $1.2 million man Michael Noel James Hosking earned his money by growing his breakfast audience from 297,900 to 329,600. The network released a graph razzing Duncan Garner’s AM Show for dropping around 10,000 listeners from the Paul Henry days – which actually seems pretty small, given what we are repeatedly told about Henry’s starpower.

6. The real morning news champs are the Guyon Espiner and Susie Ferguson tandem at RNZ’s Morning Report, however, who own nearly as much as Hosking and Garner combined, with 430,300 listeners – up an impressive 50,000 on the last survey. It sort of suggests that their approach – considered, tireless, balanced to a fault – might be a more accurate vision of ‘what kiwis really think’ than the inflammatory rhetoric of Hosking/Smith on ZB.

7. Despite the impressive growth of streaming platforms iHeartRadio and now MediaWorks’ Rova, the numbers (and likely revenue) are dwarfed by radio’s audience. Which is to say that the car is an incredible transmission device for radio, and the smartphone is not.

8. (Conspiracy theory: the bad ZB morning hosts’ boner for roads and furious denunciation of commie rail is in fact in their naked self-interest. More cars on ever-more congested roads means more listeners listening for longer. Whereas the smartphone-infested CRL will be bad for radio as a medium. Is there a link?! Definitely not. But there could be! But there’s not.)

9. There is an impressive resilience in music radio. Despite the rise and ubiquity of Spotify in the smartphone era, music stations, even those targeting younger audiences, retain a very large audience.

10. The whole sector saw growth, and across all demographics save one: 10-17, which dipped slightly, and in which most stations slid backwards. This implies that radio isn’t onboarding new listeners at quite the rate it once was, predictably – but the growth and stability across every other demo, including 18-34, suggests that radio is going to be around a good while yet. So those of us toiling away in print, online and television better hope that our benevolent radio overlords remain kind enough and confident enough in our eventual recovery to maintain the shackles which keep so many of us afloat.