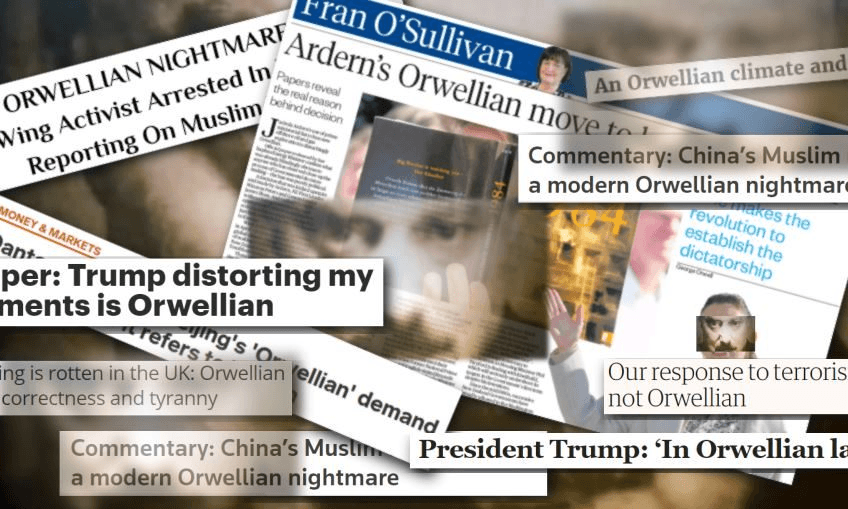 Big Sister is watching you: Just another day under Jacinda’s Orwellian eye

Welcome to Oceania, where the Party’s state-mandated groupthink and doublespeak has the populace cowering in fear. Thoughtcriminal Joseph Nunweek smuggled out this dispatch.

It was a bright if Orwellian day in June, and the clocks were striking seven. I awoke, as ever, to the steady hiss of a hot water cylinder. I rose from my bed and peered, blearily-eyed, into the glowing mirror of my telescreen. It flickered warily into resolution, the colours muted as if something – or someone – else was intercepting the signal and deciding what I would receive. Also I recently dropped my phone in the toilet.

“JACINDA ARDERN SAYS BABY NAME DECISION GOING TERRIBLY” blared the headlines of Oceania for the day. I could’ve sworn that yesterday the news was different, but then I heard the hiss of the cylinder stop, my thoughts strayed, and the moment was gone.

Padding down the hall, I found the bathroom door locked. The lights were on – yet the showerhead was silent. I paced anxiously, wary of the omnipresent screen in my hand. Was this the new procedure? Finally, the door opened.

“Sorry Joe! I was just brushing my teeth,” my flatmate announced.

I tried to regain my composure and look like I had only been waiting a moment. “I thought the shower was being used and that’s why the door was locked.”

“You know I always brush my teeth after the shower!”

Once my lovely hot shower abruptly went cold after five minutes (a telex to minigas about my usage, no doubt) I dressed and got in my autocar, which I could identify only from the alphanumeric code affixed to its rear bumper. Around me, the cars drove in eerie unison – not too slow, not too fast, never piling atop each other in an inferno. I dared to let myself wonder what – or who – was controlling their motion.

When I arrived at my job at the Ministry, I assumed my place at my designated workstation. Syme, who works in SEO, or “SocMed”, occupied the booth opposite to mine. “YOU DON’T HAVE TO BE CRAZY TO WORK HERE,” boomed the stentorian cartoon dog above her telescreen, “BUT IT HELPS.”  I let myself ponder for a moment – when I tried, a part of me cried that it wouldn’t help to be crazy and work here. But all was doublethink now.

At 10am, every day, came the Departmental Meeting. My manager cornered Syme and I after it finished.

“We need to talk about that press release for the new campaign, Nunners. What’s the ‘ask’ for the recipients?”

I paused. You never knew what could be a test, these days. “That our services are…doubleplusgood?” I ventured, cautiously.

Syme and my manager exchanged glances. “We do pretty good work, yeah, but I’m thinking specifically what the press release is encouraging our stakeholders to…sorry, Nunners, I just wanted to check if everything is going okay at the moment?”

So this was a test. “Absolutely, and I can I just say that I bloody love Big Sister Jacinda!” I shot a well-timed wink to the reflective surface of my manager’s glistening forehead, which may or may not be a telescreen.

He rolled his eyes. “We’ll pick this up later.”

On the way back to our workstations, Syme leant in. “Sick kerning on the logo for the new campaign, Nunners”. I remembered a park, a girl, a time when ‘sick’ meant ‘unwell’, and not ‘a job well done’. I stared down as I walked and banished the thought.

At lunch, I was careful not to sit with the other staff in the cafeteria. Proper conversation can quickly descend into banter, or as it is correctly known, ‘ladcrime’. Instead, I went to the Gloria Jean’s on the corner to get a flat white.

“But…I saw a billboard for soy milk on the way here.” I stammered, feeling my cheeks burn. Had the rationing under Jacinda really happened so fast?

“I’ll be going to Countdown for more in 15 if you can hang on. Otherwise there’s Coffee Club down the road.” But I remembered the screams I’d hear come out of CoffSec, and the viscous black stain that pooled at its front door. I could not be seen outside as a non-member. Too many questions.

Back the office, a tremor in my hand, I tried to sit down and finally begin some work. A quick check of the news again: “THREE STRIKES LAW SCUPPERED”.  I thought that the Oceania headlines had been about a baby, but of course it had always been this, and mine was not to wonder otherwise.

A summons, soon after, into a meeting. “We need to talk about your IT usage if you want to stay employed here.”

I was aghast. “But that was my personal telescreen? How…who was able to see it?”

“Your desk faces the entire office. I was trying to talk to you about the Powerpoint for next week while you were Googling pornography.”

Google? Powerpoint? Newspeak was moving faster than ever, and I felt overwhelmed. I burst from the room, and fled outside to my designated vehicle.

It was getting dark by the time I pulled into my driveway. As I drew my keys for the front door in the twilight, I reeled from the stench of my heaped bins, and reluctantly had to wheel both of them to the curbside. Once, I dimly recalled, this night was called ‘Wed-nes-day’. Now, it was simply ‘Bin Night’ to everyone except my flatmate, showering yet again. Her water would be piping hot; mine, simply lukewarm. Even under the Party, some had mysterious and untraceable privileges.

I allowed myself once last glance at the telescreen before I lay back into my small, single bed. “ARDERN’S ORWELLIAN MOVE TO BAN EXPLORATION”. The headline seemed new, though of course it had always been the day’s only news. Yet that word, Orwellian, stirred something in me. It spoke of things I didn’t fully understand yet which bothered me, of a way to aggregate the minor inconveniences of my day into a sinister tapestry of authoritarian cruelty. It just made bloody sense.

I wondered if tomorrow would be different. Would this intriguing story still be the news tomorrow, or would it too be rectified? Then I turned the phone away, suddenly fearful that the screen was boring its gaze back into me. I drifted into a fitful sleep, and dreamt of well-kerned typography, spooling free.