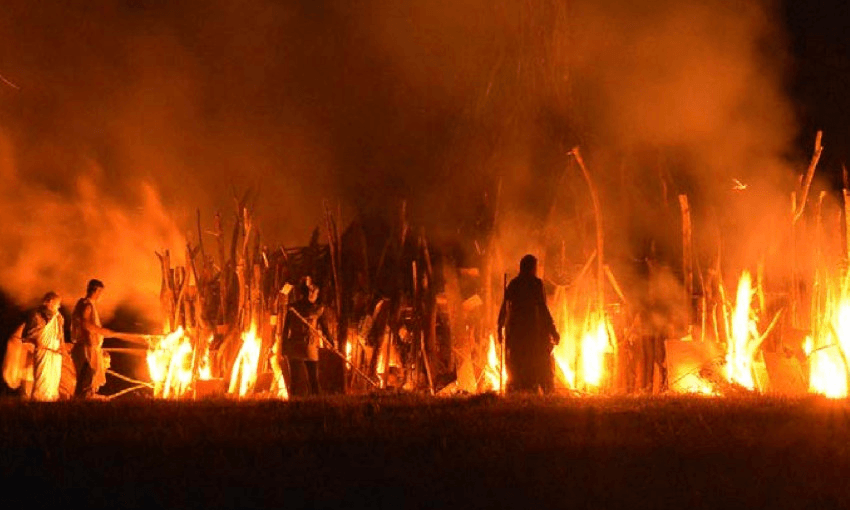 Duncan Greive: I send my kid to the cold equivalent of a prison-yard most days and I’m fine with it

“Deobrah Hill Cone’s column yesterday was a devastating indictment of an institution that many of us use every day. The whole thing dripped with concern, with contempt, with scorn for those who would force their own flesh and blood to endure such conditions.

It’s time for a confession: I am one of those appalling humans. I had dropped my middle daughter to before school care, and my youngest to daycare, before I arrived at work and read the column. By rights, I should have been mortified at my callousness.

“Judith Collins was trawling the internet this morning when she came across a shocking story. Her news source, Yournewswire.com, accused France of becoming ‘the latest nation to give in to pressure from an international network of liberal activists determined to normalize pedophilia and decriminalize sex with children’. Collins, not sensing any problems at all with that extremely credible sentence, immediately called on prime minister Jacinda Ardern to condemn France.

If yournewswire.com is a genuine news source endorsed by the National Party – and not fake news as journalists would have us believe – then France making policy concessions to an international paedophile movement run by ‘liberals’ is just the start.”

Don Rowe: Burned out: The Kiwi Burning Man has been cancelled

“Unlike the gentrified Nevada iteration, which these days features runways for Silicon Valley jets, hordes of personal chefs, and countless Musk-esque tech moguls in steampunk glasses, Kiwiburn remains a rustic event – with all the fun that entails.

This year two men fell from a cliff on consecutive nights after attempting to enter the festival after hours. In 2016 a woman was injured when a tree fell on her tent.

Organisers say negotiations with council will continue in order to reach a compromise that is both reasonable and achievable. This time around, however, it looks like hopeful attendees will have to find somewhere else to let their freak flags fly.”

Keri Mills: The Moriori myth and why it’s still with us

“Firstly, the myth. You’ve heard it before. There were a pre-Māori people in New Zealand, called the Moriori. When Māori arrived in the country they set about obliterating these peaceful Moriori inhabitants until not a single Moriori remained alive.

This story is completely wrong. But it is astonishingly pervasive. You might have heard it referred to recently by a former leader of the National Party on our national broadcaster. The interviewer, Kim Hill, responded by exclaiming ‘for heaven’s sake! If only Sir Michael King were here today’ and drawing the interview to a close. I understand her exhaustion, but I wish she had taken the time to briefly explain her invocation of the late historian, because Don Brash is only one of many New Zealanders who are confused about this part of our past.

Linda Burgess: The first WAGs: A 1970s All Black wife on rugby and women’s lib

We asked former All Black great Bob Burgess to review a new book on his team-mate Keith Murdoch. But then we changed our mind, and asked his wife Linda Burgess to write whatever she wanted about rugby.

A beautiful and poignant essay.

André Brett: Why deleting Victoria from the name of Wellington’s university is a terrible idea

“It is remarkable that the university is named for a woman. This was not replicated elsewhere in Australasia until 1991, when the Western Australian College of Advanced Education attained university status as Edith Cowan University.

They remain the two universities in Australasia named for women. A few others take the name of a city/state that was, in turn, named for a woman, such as the Universities of Adelaide and Queensland. Meanwhile 13 in Australia and one in New Zealand, Massey, are named for men.

Women have consistently received a raw deal at tertiary institutions – a disproportionate number of men still occupy senior roles, and too few universities have addressed sexual assault on campus adequately. It is inappropriate that the entire Australasian region be left with just one university named for a woman, especially not when women have contributed so much to the sector’s success despite institutionalised barriers.”

Madeleine Chapman: A friendly reminder that reverse racism is still not a real thing

“There’s a nuanced debate that could, and perhaps should, be had about situations such as this. Māori and Pasifika scholarships divide opinions, as does the Māori and Pacific Admission Scheme in medical schools. But whatever side of the argument you’re on, whatever you believe, please remember that none of this is racism. Nor is it “reverse racism” or, as Hosking put it, “acceptable racism.”

Hosking and Garner will likely never change their views and are not worth a point-by-point rebuttal. But if you find yourself wondering why there’s no such thing as racism against Pākehā, boil the jug, make yourself a cup of tea, put way too much milk in it, and have a browse through these helpful explainers.”

Group Think: Don Brash made a martyr? On the Massey University ban decision

The former National leader and Hobson’s Pledge advocate has become a fresh lightning rod in the debate around free speech and ‘deplatforming’. We asked a range of people to give us their view on the decision.

Emily Writes: Why are teachers striking? It’s about a lot more than money

“On August 15, offices around the country will likely have school kids running around. That’s because that day an all-day primary school teacher strike is scheduled. Primary teachers will be marching across the country (but mainly at Parliament) to ask for a range of changes to how classrooms are run and how they’re funded.

What exactly do teachers want?”

“Eight years’ absence is a long time for a pop star in 2018. In this era of a seemingly endless stream of #content and songs getting to #1 on the back of a viral dance craze, singers are easily forgotten if a follow-up does not come soon enough. It was only a few years ago when the online mob was baying for Frank Ocean’s blood over his four-year interlude between albums.

And yet, despite the eight-year gap, the release of a new solo song by Swedish pop star Robyn has been welcomed by a fan base as passionately as if she’d never really left us on the dancefloor without her.”