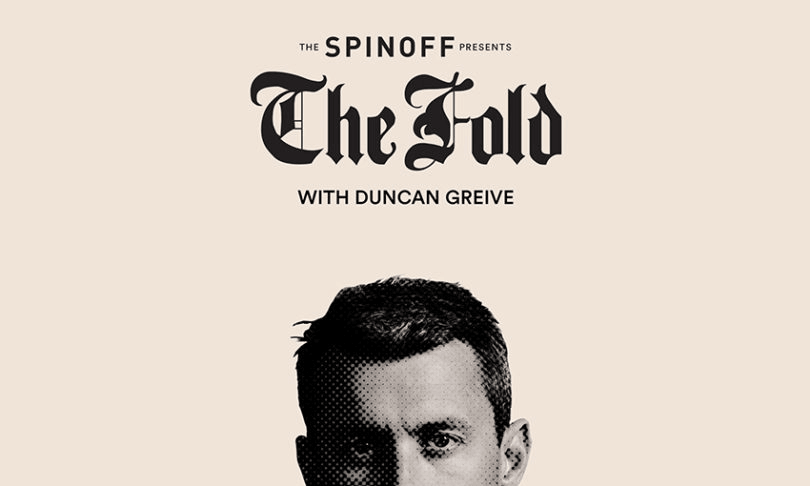 The Fold with Duncan Greive: A new podcast covering the chaos of NZ media

After a year spent reporting on and analysing the chaos enveloping New Zealand’s media industry, The Spinoff managing editor Duncan Greive has finally cracked and started a podcast to cover it.

Here is a short and necessarily incomplete list of things that have happened in New Zealand’s media in 2019:

By any standards, it’s been a lot. Throughout the year I have reported on and analysed the industry, with such frequency that media has gone from an occasional sideline to my main beat. Still, it’s not enough. Every time one of these stories breaks it alters the landscape, setting off ripples that reach beyond the entities immediately implicated.

This can happen in unexpected ways. The Herald’s paywall has been subject of feverish discussion within PR circles, as they grapple with the fact that the best stories on a huge news site have a much more limited digital audience than they used to. Three’s impending sale means that MediaWorks’ radio stars no longer have such an easy ride onto television, nor its radio stations a huge free promotional channel. What I’m trying to say is that there is so much to talk about that it rarely all fits in the confines of a story or piece of analysis.

A month ago, when news of the Three sale first broke, I found myself alone at our podcast studio, doing something strange and antisocial. I was alone at the microphone, and proceeded to record a half-hour podcast with no guests, talking about various angles related to the Three sale announcement. I popped it into the stream of The Real Pod, our weekly reality TV podcast, without any real expectation of whether there was demand for such a product.

It felt like an indulgence, me venting all the chaos and emotion of a tumultuous few days (NZ Today had also been cancelled earlier the same week). But people seemed to like it, enjoy the fact it went into the weeds a little, and attempted to explain the complexities and ramifications of the situation. In the aftermath, we surveyed The Spinoff Members about whether they would listen to a media podcast, and they signalled that they would. Actually, that’s not quite right – half said they would, and a further 40% were cautiously willing to try it. Only one in 10 ticked “boring – not for me”, and I’m honestly really relaxed about them and don’t think about why they hate me at all!

Which brings us to The Fold. The idea is that the podcast will happen at least monthly, with emergency pods whenever big local media stories break. The core format will be conversational (with the odd solo podcast thrown in), with a smallish group of regulars who I know geek out on this as much as me.

I’ll also drag in the titans of our local industry to talk about what’s happening here, and their own patch. So it is with episode one – an interview with Sinead Boucher, CEO of Stuff.

Stuff is in many ways the fulcrum of our whole industry. It still employs more journalists than any other entity, and is the closest thing to a truly national newspaper group. It tried to merge with NZME, has been loosely linked to a hookup with MediaWorks and subject of very mild speculation that it could be acquired by TVNZ.

All this is because it has owners who don’t really want to own it. Stuff has existed in limbo for some years now, and learned how to get on with things in that state.

Yet Stuff has also been one of the more innovative media companies of the 21st century, pioneering mass-market digital with stuff.co.nz, of which Boucher was the inaugural editor. It bought and sold for a sizeable profit a stake in TradeMe, and has started up a number of adjacent businesses recently, most notably Neighbourly and Stuff Fibre.

It’s been notorious for an obnoxious comments section, and for a particularly intense style of short, clicky journalism. For a long time, it hid its best journalism behind a wall of high-calorie work of dubious nutritional value. That started to swing around when Boucher took over as CEO in August of 2017. A team of national correspondents was assembled, to sit alongside the investigative unit Stuff Circuit. It got rid of terrible cartoonist Al Nisbet, and emphasised the work of great young journalists like Florence Kerr and Charlie Mitchell. It introduced a #metoo unit and a climate change section (which it recently announced it’s significantly expanding), published major work wrestling with New Zealand’s relationship with te Tiriti and regularly publishes stories of limitless significance. Broadly, it has seemed committed to really emphasising the best of its journalism.

Doing all that with reluctant owners and in a constrained environment – I thought it pretty admirable, and so kicked off this podcast with an interview with Boucher. We started off discussing the early days of Stuff, through its queasy peak into the current iteration. Along the way she revealed a number of fascinating insights into the reality of running a news organisation at scale in 2019, including the fact that of the 150,000 comments readers attempt to post each month, a full third are rejected for violations. This brutal task is accomplished by human moderators – in striking contrast to the laissez-faire attitude of Facebook.

Boucher is a strident critic of the latter, and told me that since March 15 Stuff has not spent a cent on the platform. This is a really big deal – most news organisations have a number of Facebook campaigns running at any given time, with the Herald leading the market, having anywhere up to 50 running at once. (The Spinoff will have around three to five at any given time.)

It’s yet more evidence that an organisation once thought of as the epitome of the toxic side of 00s news culture has become much more purpose-driven of late. With hindsight I should probably have challenged her more on certain issues, particularly its excesses. I probably got too hung up on hearing about the insides of our biggest news organisation. Either way, I found the window into Stuff’s history and worldview fascinating – and hope you do too.

The Fold will drop towards the end of the month, except when wild news events break that demand an immediate response, and is available where all good podcasts are given away free – including Apple Podcasts, Spotify and all Android platforms.