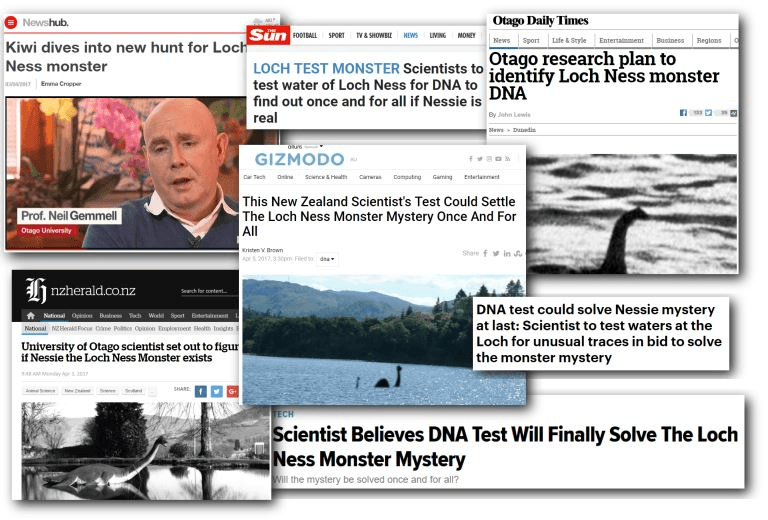 Correction, 16 July: Following communications with the University of Otago, this story has been updated to reflect the actual costs of the Loch Ness DNZ project, and to include a response from Professor Neil Gemmell, the head of the project.

While we were away, Otago University Professor Neil Gemmell spent most of June searching through the depths of Loch Ness looking for evidence of a monster. I’m going to take a wild punt here and say he didn’t find one.

While he was doing this, the university’s communications department were on an absolute media blitz, trying to push this story as far and wide as possible. They even sent a full time comms staffer to Scotland with him solely dedicated to promoting this story.

According to Director of Communications Megan McPherson, the story had a reach of “tens of millions” with at least 10 international broadcasts and 700 media hits. “We’ve gone to a large effort to ensure the University of Otago gets the profile it deserves,” she said.

But what is the profile that Otago deserves? Because this isn’t it. Pushing a story about a hunt for a mythical creature doesn’t make us seem like an august, respectable institution, it makes us look like crackpots.

Harlene Hayne described the comms team’s work as “supporting professor Gemmell,” and “helping him handle the throngs of media requests”.

Except that’s not quite accurate. It’s not as if the comms team came on board only after Professor Gemmell became overwhelmed by international media. Comms was breathlessly sending out press releases and calling media outlets for weeks trying to get coverage for this story. So far, the University of Otago Twitter account has tweeted about the hunt of the Loch Ness Monster on 41 separate occasions.

There has been far more focus put on promoting this research than any other research that Otago has produced over the last few months. Somehow the professional PR people that the university hired haven’t worked out that the saying ‘all publicity is good publicity’ doesn’t actually fly in the real world.

There’s a reason you don’t hear about Harvard launching expeditions to find Bigfoot. Sure, it would get a bunch of media attention, but it would also make them look like fucking morons and diminish the brand of Harvard.

Meanwhile, the higher-ups at Otago Uni are patting themselves on the back and grinning like idiots because they managed to get an interview on ITV and a photo in the Daily Mail of someone wearing an Otago-branded hoodie.

This is nothing against Prof Gemmell. He’s a world-renowned expert in evolutionary biology and he’s using this as a chance to demonstrate some cool new technology that’s already being used to analyse New Zealand waters. The fact that he’s also getting the chance to pursue a childhood dream of hunting for Nessie is an added bonus.

Prof Gemmell did get some funding from uni research grants, but large chunks of his expenses were also funded by donations and other grants. The same can’t be said for the uni comms team. While they wouldn’t give us any solid figures for what the whole project cost, it must have been easily into five figures [correction, 16/07: the total hard costs of the adviser’s trip to Scotland came to $3693.28] once you take into account flights to Scotland, a few weeks in a hotel room and the hours of work that the entire team has put into this one story [see correction below].

They invested heavily in this story because it would get millions of clicks. And it did. What it didn’t do was enhance Otago University’s reputation in any way whatsoever.

Correction, 16 July: The University of Otago has been in touch to correct some claims about the cost of the Loch Ness project: “The media work for the Loch Ness DNA project was for most part down to the work of a single part-time communications adviser, not an ‘entire team’.”

The university also points out that the adviser’s trip to Scotland included one night in a hotel; the rest of his stay was spent in shared accommodation. In light of the cost of the Scotland trip as detailed above, we have removed the word ‘expensive’ from this story’s headline.

“Joel MacManus’s opinion piece calls into question the scientific integrity/credibility of my team, many of whom are internationally acclaimed for their research. Quite simply they would not have joined an endeavour that they thought foolish or likely to cause harm to their reputations. This is a science endeavour with exceptional credentials that will document the life in Loch Ness in unprecedented detail. We are dubious that there is a monster, but the global appeal of that legend, has enabled us to the describe the scientific process and a new form of genetic investigation to audiences we have rarely, or never, connected with previously. At its heart our project will deliver fundamental new knowledge. It is this, plus the unparalleled opportunity to communicate this science and the scientific process on which it is based that has brought together an exceptional array of scientists.

“One additional point I wish to make is that this was no holiday and the communications adviser worked the long hours we did. They were also an essential  conduit among the comms offices of our various partner institutions, many of whom also issued press releases. The adviser’s work was key to helping this be a coordinated activity that ensured all parties got appropriate attribution. This is important for long-term relationship building as we hope to cement MOUs with these institutions in the UK, France, US and Australia for future work.”