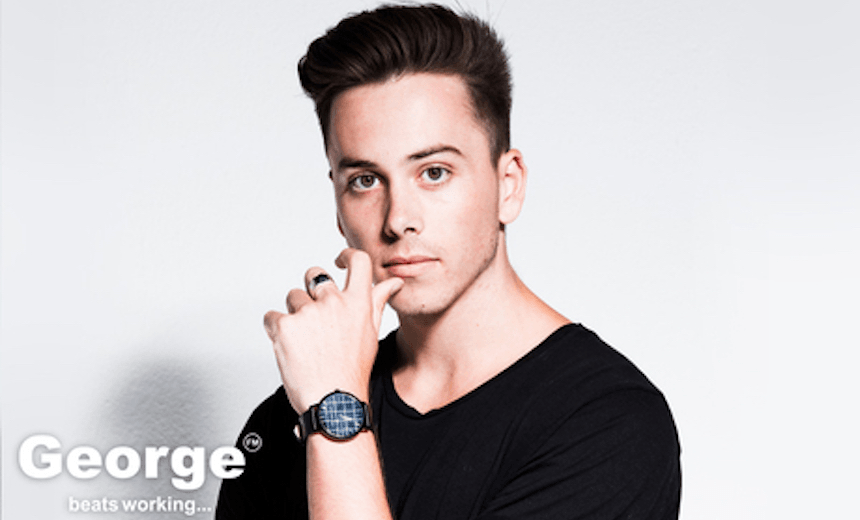 Without ever really trying, I seem to have spent a lot of time in the past year looking at Max Key’s abs, staring into his gormless photo face, admiring his impossibly precise haircut. He is, whether we are prepared to admit it to ourselves or not, a legitimate celebrity. I’ve seen his video from his holiday in Hawaii with his Dad and I’ve watched from afar as he fell in love and then broke up with his ex-girlfriend.

But, weirdly, until last night I had never heard his voice.

Last night he debuted his radio show ‘Keyed in With Max Key’ (10pm-11pm Tuesdays) on George FM, joining the ranks of the dance music station’s resident Nights DJs, of which I counted 22 men and 0 women on the website. One of the older DJs, a guy called Jay Bulletproof, was there to help him do the buttons and that. “How are you feeling?” he asked. “I’m fizzing mate,” Max Key replied. His voice had that slightly flat, ‘I’ve got a cold’ quality that most New Zealanders have to some extent. He sounded a bit like me.

When I was Max Key’s age I, too, had a radio show. I filled in afternoons on Dunedin’s Radio One whenever anybody couldn’t do their slot. My main priority was to talk on air as little as possible. I figured out that if I pressed all the right buttons people would just think it was on automatic playlist, when really I was getting to choose all the music. It was the perfect crime.

I did all the main student radio mistakes – forgetting to fade the mic up, playing two songs at the same time, mumbling unintelligibly. Answering the phone in the studio was mostly out of the question. The one time I did pick up, somebody requested Fat Freddy’s Drop and it completely ruined my flow of 100% uninterrupted indie rock.

Max Key had no such reservations on his radio DJ debut. “Any requests or shoutouts just comment on my Instagram,” he told listeners before launching straight into a seamless 26-minute set. It probably contained a hundred unforgivable DJ mistakes, but he was already operating on a higher plane than I ever did, or can probably ever comprehend. Why did I never think to chuck an airhorn sound effect over the top of all those Die! Die! Die! and Shocking Pinks tracks I played?

Every few minutes the station ID sting would play over the top: “Right now on George FM you’re Keyed in with Max Key.” It was true. I was extremely Keyed in. I knew very few of the songs he was playing, but the ones I did recognise – a sped up version of ‘Hello’ by Adele, ‘Gas Pedal’ by Sage The Gemini – really hit home. By the time set abruptly ended mid-’All My Friends’ I found myself wondering how much he’d charge to do a wedding or a birthday.

“Oh my gosh, Max Key, bruv…” interjected Jay Bulletproof, in an unusual combination of upper and lower-class English expressions. “You slew it!” Max Key seemed to be enjoying his first taste of radio DJing – “the squad’s here, full force” – and took the opportunity to invite listeners to follow him on Snapchat (maxkey7).

The break in the DJ set turned out to be for the world premiere of Max Key’s single ‘Forget You’ – “probably New Zealand’s most anticipated new track since When The Cat’s Away in the 80s,” speculated Jay Bulletproof. I don’t remember a single thing about it, but then I don’t remember people’s names the first time I meet them either. It’s nothing personal.

After his world premiere Max Key got back on the decks. Near the end of his allotted hour he played the Justin Bieber banger ‘Sorry’ back-to-back with Ol’ Dirty Bastard’s ‘Shimmy Shimmy Ya’. “We’ve crashed the app,” announced Jay Bulletproof. By all accounts George FM’s Snapstory was off the hook, and Instagram was going nuts. Some were even talking about it on fuddy-duddy old Twitter.

Max Key’s rare knack for virality appeared to have struck again. “Big thankyou to everyone who tuned in,” he said, channeling a post-match rugby interview. “It means a lot.”