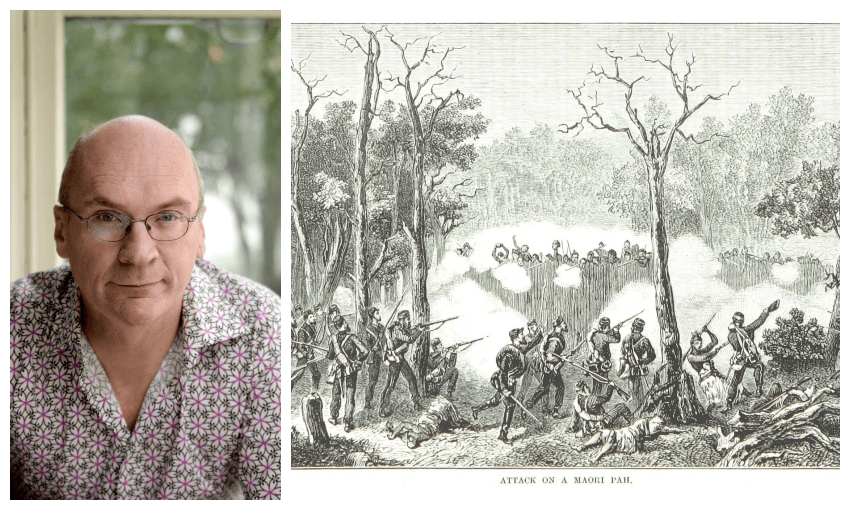 Dr Vincent O’Malley is campaigning to get the New Zealand Wars taught in New Zealand schools. The Hamilton Press Club stands with O’Malley. He will address the subject as our guest speaker at the free lunch extravaganza to be held on Friday, August 10. What better venue than Hamilton, the heart of the Waikato, the city that exists as the spoils of war?

I asked O’Malley for a few words to give an indication of what he’ll talk about. He emailed: “The New Zealand Wars profoundly influenced the course and directions of the nation’s history. They are a big part of the reason why Auckland is our largest city today, for example, or why the North Island has a larger population than the South Island. And they also marked the point at which the Treaty relationship with iwi went out the window for next century or more.

“We are still living with the legacy of these conflicts in so many ways. As a nation, it seems this is a history we have long tried to run from. More recently, thanks to the Otorohanga College petition in 2015, there have been signs that at least some Pākehā New Zealanders might at last be willing to hear these stories – stories that Māori have carried alone until now. So why do so few people learn about the history of these conflicts at school and how do we change that? Could we mark the battle sites better than running roads through the middle of them?

“The time is ripe to know, own and understand this history.”

Hamilton Press Club, too, has a long history. It dates back to May. Actually it existed for 10 years before that, as the Wintec Press Club, but silly old Wintec pulled the plug on funding at the beginning of the year and all seemed lost but then Hamilton firm Chow:Hill decided to be magnanimous and generous, and stepped in to keep the Press Club in existence. We changed the name and everything else stayed the same.

Our first-ever free lunch extravaganza, in May, starred Alison Mau as guest speaker, and she gave a most interesting talk about her involvement with the Stuff team working on #metooNZ. She made scornful noises about Wellington writer David Cohen, who had dared to ask questions about Stuff’s #metoo investigation – I invited David to come along as a guest, but he couldn’t make it, unfortunately. I missed the ending of Ali’s speech because I went off to say goodbye to a guest who had to leave early, which meant I was also absent when the Q + A session began, and was unable to perform my usual role of conducting it in an orderly fashion; and so when I walked back into the venue, some guy was on his feet, swaying, and making an incoherent point. It didn’t go downhill from there but neither did it go uphill and the whole thing was a bit of a shambles.

Never mind. The best thing about Press Club is always the guests. The invite-only audience of 100 came from Dunedin, Christchurch, Wellington, Whanganui, Tauranga, Glen Eden. Mihingarangi Forbes was there. Eric Young was there. So was Leonie Hayden, James McOnie, Marama Davidson, Jared Savage, Rachel Stewart, Jono Milne, Louise Wallace, and Hamilton sex worker Lisa Lewis brought along her mum because it was her birthday.

A good time was had by all, or most, and it was fantastic to get the Hamilton Press Club up and running. Brian Squair, managing director at Hamilton architectural firm Chow:Hill, paid the bill. His commitment to the Press Club is based on a civic pride, that it’s a good thing for Hamilton. The belief is catching on. Hamilton’s SkyCity Casino has signed up as an additional sponsor for the August 10 event.

And so the show goes on. It’s all very well to stage something merry and quasi-glamorous on the banks of the Waikato in the heart of the most attractive river city in the Southern Hemisphere but I worry that there ought to be more to it than good times. I want the Press Club to maybe have some actual social use. I said in my closing remarks at the May event: “What is the point of the Press Club? What is its purpose?” I left the questions open; the Press Club, I said, quite likely swaying by that stage in proceedings, is a work in progress. But the appearance of Vincent O’Malley on August 10 goes some way towards providing an answer.