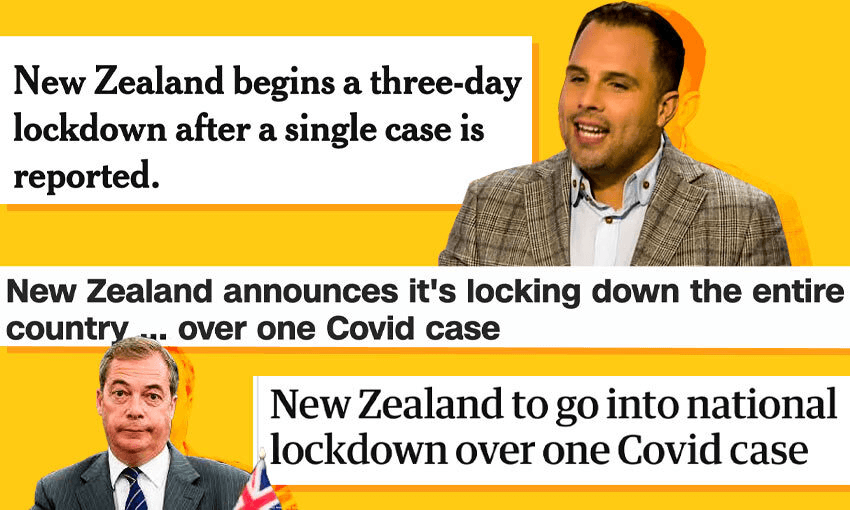 A single case and a ‘never-ending nightmare’: World media react to NZ lockdown

While most coverage expressed wonder at the decision to lockdown over just one case, other commentators saw something more suspicious in Jacinda Ardern’s ‘go hard and go early’ strategy.

“New Zealand announces it’s locking down the entire country … over one Covid case”.

Last night’s CNN headline captured the bemused international reaction to our snap lockdown, with most news coverage focusing on the single case that prompted it.

Of course the “those wacky Hobbits” vibe of the headlines is a little disingenuous – missing is the key context of New Zealand’s longstanding elimination strategy, and the intense contagiousness of the delta variant – but it’s also a good reminder of how much of a global outlier we are when it comes to keeping the virus out of the community, at least most of the time.

While the majority of reports included a few remarks about New Zealand’s enviable record on Covid-19 prevention, some commentators were not so generous. On the UK’s new Fox News-inspired network GB News, former UK Independence Party leader Nigel Farage expressed amazement at the decision to lock down both islands – “where’s the sense in that one?!” – and his GB News colleague, New Zealander Dan Wootton, was even more outraged.

“New Zealand’s zero-Covid fantasy is quickly turning into a never-ending nightmare,” he began, not at all hyperbolically, before contrasting the “awful” Ardern with Her Maj, who apparently has decided to “keep calm and carry on” in the face of a Covid case at Balmoral.

Wootton’s clip came in for plenty of pushback on Twitter, but the day’s biggest pile-on was in response to investigative journalist, Moment of Truth guest star, and increasingly contrarian commentator Glenn Greenwald. His tweet about New Zealand’s lockdown was a true symphony of wrongness, from the suggestion that we’ve been banned from communicating with our neighbours, to the claim that New Zealanders are experiencing “sustained isolation”, to the identification of Ardern as New Zealand’s “President”.

Yesterday, some Australian official decreed that citizens are not allowed to take their masks off outside to consume alcohol. Today, the President of New Zealand orders citizens *not to talk to their neighbors*.

They seem demented, oblivious to the costs of sustained isolation. https://t.co/BIQxciwuVI

Greenwald swiftly found himself ratioed into the ether by New Zealanders ridiculing him for his nonexistent grip on reality. But the most pointed reaction came from Newsroom’s Marc Daalder, an American, who calmly set out the facts about our Covid response – including this country’s infinitesimal Covid death rate compared to the UK and US.

Because NZ is going into lockdown, the international hot takes brigade will be out in full force. Some useful comparators:

Given that Greenwald lives in a country with one of the world’s worst Covid-19 records and an (actual) president who spreads not only Covid misinformation but the virus itself, perhaps he’d be well advised to focus on his own country, and not ones he clearly knows nothing about.