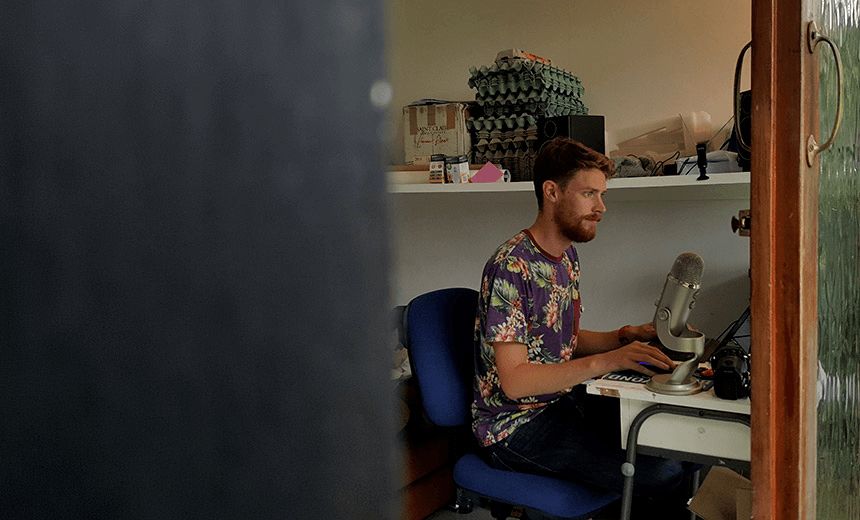 A podcast where comedians Tim Batt and Guy Montgomery watch the same shit movie every week for a year has won them fans all over the world and three million downloads. Now Batt is creating his own stable of podcasts called Little Empire Podcast Network. He talks to José Barbosa about the stupidest idea for a podcast ever, why Americans seem so buzzy and how exactly one creates a podcast network from a cosy garden shed in Grey Lynn.

Tim Batt was one half of what might have been New Zealand television’s funniest comedy double act. On the now defunct U Live channel Tim presented for the country weekly toilet reviews while host Guy Montgomery looked on in disgust. Tim was chipper as a bluebird in spring; Guy hated Tim’s guts and didn’t do much to hide it. It was an act, of course (the dynamic was agreed on mere moments before they went to air for the first time). There was something so classically comedic about the relationship, Tim’s optimism in the face of yet another horrid toilet review versus Guy’s intense loathing, and yet it felt fresh. At least it did before TVNZ closed the channel.

The Worst Idea Of All Time (that’s the crap movie watching one) came out of a desire to keep working together. As the second season’s been ticking along Tim’s been busy launching a small podcast network which includes the aforementioned show as well as three other regular podcasts. They are:

Time of The Month (A Weekly Podcast) is hosted by bloody good mates; Maddy Budd and Kelly Pochyba. The girls spend half an hour a week dissecting life’s big issues such as failing driving tests and getting so drunk after you fail a driving test, you accidentally get a tattoo. The girls delve into the issues of everyday early 20-somethings who are trying to balance work/study/getting on the piss/relationships.

Tim Talks To: A fortnightly interview podcast series hosted by Tim Batt. Tim talks to anyone he thinks is interesting; comedians, politicians and more.

It’s early days yet, but Batt’s got himself gear, a recording space and sponsors. He’s keen and ready to hustle. We sat down together to discuss his plans.