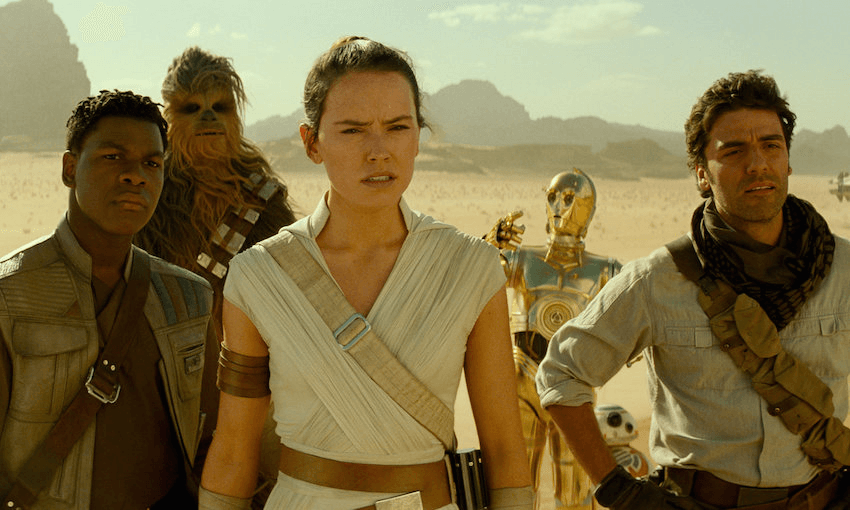 New Star Wars, new cacophony of endless opinions on the internet. Here’s another one!

Thoughts on Star Wars: The Rise of Skywalker from a lifelong fan

New Star Wars, new cacophony of endless opinions on the internet. Here’s another one!

The latest Star Wars film is out, and a lot of people have a lot of opinions about it, including culture editor Sam Brooks who saw a midnight screening last night. These are his fast reckons.

Spoilers for Star Wars: The Rise of Skywalker, obviously. Did you read the headline?

Look. Nobody wants a review of the latest Star Wars film. You’ll see it and have your own thoughts about it, and you should be allowed to have those. For better or worse, Star Wars is a franchise now, and like any other franchise, we should be allowed to have our own opinions about it, free from harassment. Star Wars is basically like Subway now. It feels good to consume it, and then you start thinking about all the problems and start feeling a bit gross.

But, I did pay my own human dollars to see Episode IX (too many episodes) in Event Cinemas Gold Class (flex) last night, so here’s a few thoughts. For clarity, I enjoy more or less every Star Wars film I’ve ever seen, and I’m a big fan of the Expanded Universe, at least as far as video games go.

If that makes you disregard my opinion, I can happily direct you to a blank internet tab. For the rest of you, here we go!

Look, ultimately, you have to find your own path with this one. It’s the ninth film in the biggest film franchise in the world. Chances are you know what you’re going to think of it before you even buy your ticket, and what you get out of that experience.

Do you generally find Star Wars films delightful? You’ll find this delightful. There’s a lot of moments of wonder, and it wraps up the trilogy in a fairly satisfying way. It probably won’t hold up outside of the big-bang-boom of a cinema, but you won’t hate it if you watch it on TV in a few years’ time.

Do you hate Star Wars films or have no interest in them? You probably won’t like this one! Why are you reading this article? Go read this amazing article about the hidden history of the Dawn Raids at Western Springs College instead.

Are you a super fan of the series and have endless conversations with fellow fans about which films are better, what is canon and what isn’t? You… probably won’t love this one! Or anything, ever again. You are a super fan and have to resign yourself to being consistently disappointed by the thing you love. Thanks for playing!

Oh, also, BB-8 is the best thing about this trilogy. This is not up for discussion.

You can watch Star Wars: The Rise of Skywalker at literally any cinema for the forseeable future.