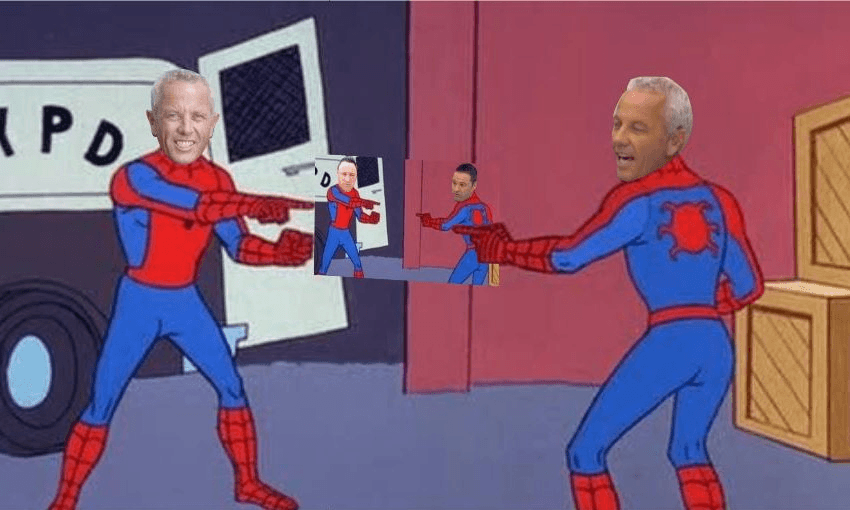 “I’m sick of all the sanctimony that’s coming out of our disgraceful written media at the moment … They should be ashamed of themselves.”

The Oxford Dictionary defines sanctimony as “The action or practice of acting as if one were morally superior to other people.”

The Spinoff is unable to confirm whether the words “act as if you are morally superior to other people” are literally written on Mark Richardson’s job description.

“All they do is grizzle. That’s all I hear out of the young people now. Grizzle about this. Grizzle about that. Complain this isn’t fair. How about get off your arse and do some work?” said Mark Richardson on the AM Show, sanctimoniously.

“They just want things that make life easier, and when it’s not easy they’re in some sort of crisis.”

Mark Richardson may also have had in mind Mark Richardson’s recent sanctimony around whether women should be asked questions about their child-bearing plans in job interviews. Or his recent sanctimony in dismissing those who suggest being a mother is tantamount to a job. “It is hard work being a mum, but you can’t call it a job, it is a fact of life. We raise children on this planet. Don’t call it a job,” he said, sanctimoniously.

Mark Richardson was just as likely to have been censuring Mark Richardson for a recent moral lecture in which he suggested New Zealand could take a leaf out of the book of Philippines president Rodrigo Duterte and his death-squad campaign against drugs.

Sanctimoniously dismissing “human rights mumbo-jumbo”, Mark Richardson said: “If they really want to affect supply, they’re going to have to conduct an actual war – and conduct it like a war.” That meant giving a group of people “the power to operate above, below, underneath, in the murky shadows, and these people just go missing”.

More likely still, Mark Richardson was sickened by Mark Richardson’s haughty insistence of his moral superiority in driving in the outside lane without any intention of overtaking. It was a question of courtesy, and “I choose not to be courteous”, but not against the law, said Mark Richardson. As the web-page on which his sanctimonious outburst is recorded notes, “it is against the law”.

It is not the first time that high-profile broadcaster and former cricketer Mark Richardson has launched such a tirade. Just last month Mark Richardson characterised the media as “sheep, wandering around on a field of sanctimony”, sanctimoniously.

The media should try “writing something that’s actually difficult to justify, then have a go at justifying it” said cricketer turned post-modernist busker Mark Richardson.

The remaining member of the AM Show trio, Amanda Gillies, is a well-regarded and intelligent broadcaster. There are, nevertheless, fears that she may not be spared, and as such is warned to stay well away from Amanda Gillies.