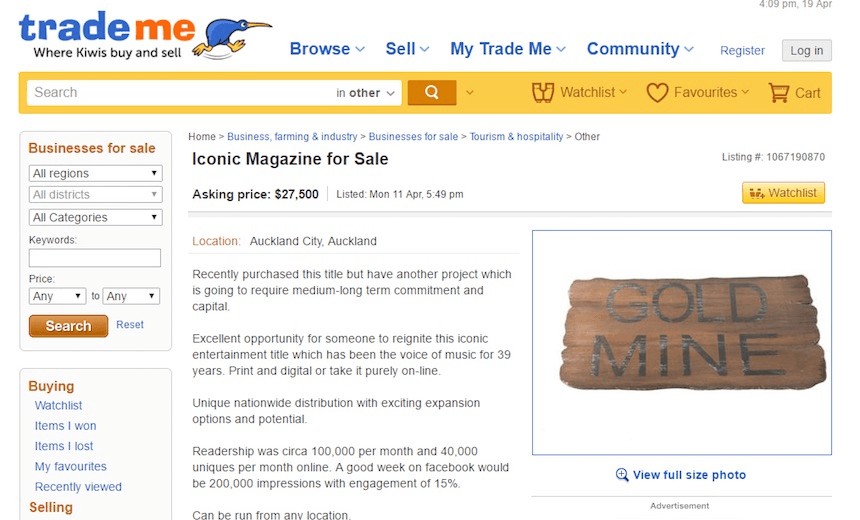 Which iconic New Zealand magazine is mysteriously being sold on TradeMe?

A mysterious TradeMe listing offering a GOLD MINE of a magazine for potential investors piques Steve Newall’s interest – but why won’t they tell us its name?

A mysterious listing on Trade Me teases an “Iconic Magazine for Sale”. Beside it, an image alluringly screams GOLD MINE.

Oddly, there’s no mention in the listing of what it’s actually selling. Which seems a bit counter to how online commerce works.

Recently purchased this title but have another project which is going to require medium-long term commitment and capital.

Excellent opportunity for someone to reignite this iconic entertainment title which has been the voice of music for 39 years. Print and digital or take it purely on-line.

“Voice of music” and “39 years” are the tells – a quick check on Audioculture confirms, in the words of Murray Cammick: “In June 1977 the first issue of the free music magazine RipItUp appeared in music stores nationwide. The magazine was a modest 16 pages of tabloid newsprint folded in half with the Commodores on the cover.”

It would be safe to think the latest incarnation of RipItUp had itself folded. I hadn’t seen a copy in print since co-editor Andrew Johnstone’s infamous and prolific use of the N-word in his review of the film Dope.

So what the hell happened? And why is RipItUp for sale on Trade Me without letting the prospective buyer know what exactly it is they’re buying?

When approached for comment, Hislop confirmed that it is indeed RipItUp which is for sale, and explained: “The mag actually changed hands around November and the new owner was going to relaunch but then got a new project come out of leftfield so it’s been dormant.” Since he was the last to operate the title, Hislop says he has been helping field enquiries. (Update: Peter McLennan has informed us the current owner is Leanne Frisbee of Passion PR)

He didn’t elaborate on why it’s for sale online – and fairly anonymously at that – other than to say “most businesses don’t name themselves when advertising but anyone who we’ve spoken to have worked it out and anyone who asks we tell them.”

Clearly you don’t have to be a rocket scientist to work it out – I did, after all – but there’s still something intriguing about the whole situation. Now we know it’s RipItUp, but does that make it a GOLD MINE? Is the readership really 100,000 per month as the listing states? Perhaps the new owner might find out.

The magazine’s founder Murray Cammick believes there’s still plenty of value in the title. “If you’re getting the archives, it probably would be a legitimate sum if anyone wants those archives – the rights to all the stories that exist in the magazine.”

From a historical perspective, that is. “It’s a difficult time in terms of whether anyone wants to read a magazine,” Cammick continues. “I, for instance, quite liked Volume when it was out, and yet it appears the young music enthusiast didn’t really want to pick up a magazine. That’s a fact that would influence a buyer really. Young music people seem to want to hold a phone in their hand, not hold a magazine in their hand.”

“The current time is just a little bit different because RipItUp existed in an era of very strong music writing, and there were very good music writers around. I don’t know that people think the same at the moment, y’know. At one stage people really aspired to write about music in a big way, and I don’t see that the aspiration is necessarily there to do music writing or read a lot of it.”

It’s not much use trying to pay the bills with ads in a magazine no one wants to read or write for, then. “I’m bemused by the fact Fold and Volume didn’t work and that would put me off any attempt to make RipItUp work – again,” says Cammick.

My suggestion – buy Rip It Up for $27,500 and commission an investigative feature on the sale. Or a study on how to find readers and writers.