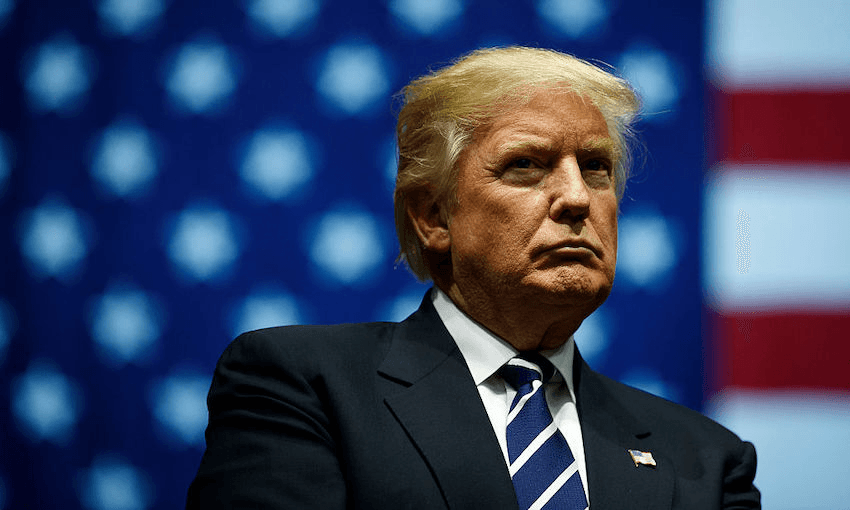 The strange hijacking of RNZ’s US debate preview

At 2pm New Zealand time, the final debate between president Donald Trump and his challenger, Joe Biden, takes place in Nashville, Tennessee. It’s Trump’s last big chance to sway the voters that have turned against him, and so it made sense that Morning Report would bring on a couple of US political commentators to discuss the issues likely to come up at the debate. What many listeners may have found surprising was RNZ’s choice of guests. The two invited to speak to RNZ’s flagship news programme were Ashe Schow, a senior editor for The Daily Wire – the Ben Shapiro co-founded website which publishes some truly toxic content and is alleged to have knowingly circulated misinformation on Facebook – and David Harsanyi, a senior writer at the National Review, one of America’s most famous conservative magazines. Harsanyi is also the author of the book The People Have Spoken (and They Are Wrong): The Case Against Democracy.

Together, Schow and Harsanyi supplied Morning Report with nine minutes of Trump talking points, their focus largely on allegations concerning Hunter Biden, Joe Biden’s son. Schow likened the Bidens to the mafia and claimed that Joe Biden had “used his son in order to enrich himself”. Harsanyi chimed in to agree. “There is a lot of evidence that Joe Biden could have benefitted from the things that Hunter was doing,“ he said.

What’s the obsession with Hunter Biden, again? You may remember his focal role in the impeachment proceedings against Trump earlier this year, and he’s back in the news thanks to some dubiously sourced emails published in the tabloid New York Post on October 14. Most of these emails – released via Trump’s personal lawyer Rudy Giuliani, who is currently dealing with his own embarrassing revelations – are relatively trivial (and also occasionally genuinely touching) personal messages exchanged with family and friends.

However Trump supporters have seized on one email they claim as proof that Joe Biden met with an adviser to Ukrainian energy company Burisma, where Hunter Biden was a board member. It should be noted that the email neither substantiates the claim – the adviser thanks Hunter Biden for “the opportunity” to meet his father, but there is no proof any meeting ever took place – nor has it been shown to be authentic. Doubts about the veracity and sourcing of the story caused New York Post reporters to refuse to attach their bylines to it, and prompted Facebook and Twitter to throttle its circulation.

Still, Schow and Harsanyi argued, the US media should be covering the emails in the same way they treated the leak of Hillary Clinton’s emails four years ago – turning it into a story that many believe played a decisive role in handing the 2016 election to Trump. Said Harsanyi, “I’m not saying you have to run a story saying [the Biden allegation] was true, but certainly that was enough evidence to investigate and follow the story. These newspapers follow stories with far lower standards of evidence.”

Later, Schow claimed Joe Biden had threatened to ban fracking (he has not), and that today’s debate moderator, Kristin Welker, will use “the mute button” to disadvantage Trump (she can’t – the debaters will be automatically muted during each other’s opening statements; Welker has no “mute button” of her own). According to Schow, Welker “has shown a bias towards Democrats in the past, so she’s certainly going to use [the button] against Trump”.

During the interview, presenter Corin Dann repeatedly challenged both guests on their claims, and told listeners that Schow is a “right-leaning” writer. However no such label was attached to Dann’s other guest. Harsanyi’s worldview is clear: as well as his role at the National Review, he is a columnist for the New York Post, the newspaper that was the focus of today’s interview – an important fact that went undisclosed. As an author, Harasanyi’s books include Obama’s Four Horsemen: The Disasters Unleashed by Obama’s Reelection; and Nanny State: How Food Fascists, Teetotaling Do-Gooders, Priggish Moralists, and other Boneheaded Bureaucrats are Turning America into a Nation of Children.

Having been given nearly 10 minutes to tag team attacks on Biden with a fellow “right-leaning” commentator, Harsanyi couldn’t help feeling a little smug. “I think a New Zealand program accidentally invited me on with @AsheSchow thinking I was going to be a liberal and debate her,” he tweeted this morning. “That didn’t work out.”