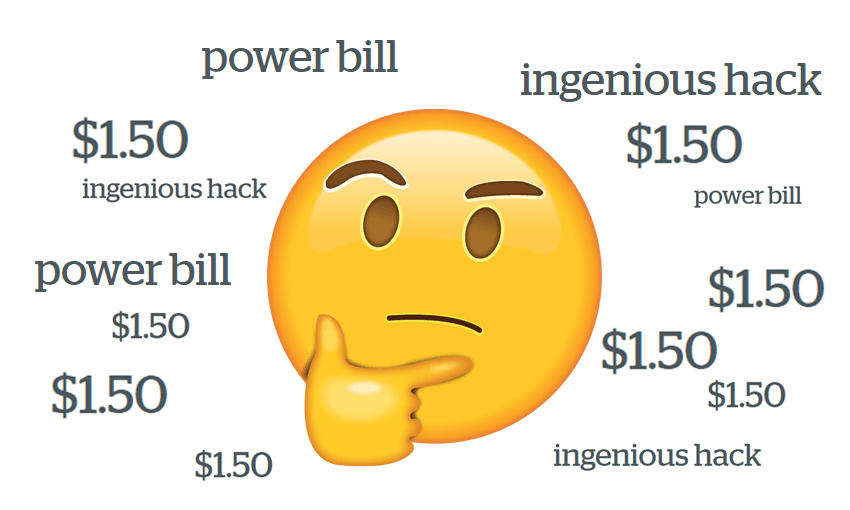 The mysterious case of the $1.50 a year power bill

Could it really cost less than a cup of coffee to power your home for an entire year? Mark Hanna investigates the New Zealand Herald’s extraordinary claim.

Yesterday afternoon, the New Zealand Herald broke a huge story about something that, if true, could revolutionise our way of life and possibly even solve climate change. It was justifiably given the coveted top spot on their website, with the headline declaring: “Kiwi’s ingenious hack cuts power bill down to just $1.50 a year”.

Just imagine if everyone could live on just $1.50 worth of power over a whole year? Climate change would be pretty much sorted. The preview image for the article showed a bunch of aluminium cans stacked together, so the solution is possibly already in your recycling bin.

The story is about a homemade solar-powered heating system where 270 aluminium cans were cut open to allow airflow between them, painted black to absorb heat, and mounted in a stack on the outside of a house with a vent leading inside. The sun heats the air inside the cans, and a couple of small fans help distribute that heat throughout the house. It really is pretty clever.

That certainly sounds like it would work at warming up a home when it’s nice and sunny. But what about reducing a power bill to $1.50 a year? How could that affect all the other things we use power for? Lights, cooking, hot water, electronics – those things don’t all fit into just $1.50 a year once we take heating rooms out of the equation.

Maybe this wasn’t quite the breakthrough the Herald made it out to be after all.

Earlier this week, the Salvation Army released details of a survey it conducted which found nearly half of the 1,005 people they polled had gone without heating to save money. Going without heating would surely have the same impact on your power bill as using a heating system that doesn’t use electricity, but their power bills will surely have been higher than $0.13 per month. The main source of heating in my home is a fireplace, and that certainly hasn’t reduced my power bill down to practically nothing.

I thought I’d found the explanation yesterday when I saw RNZ had also covered the story but didn’t repeat the claim about a $1.50 per year power bill. Rather, they say the heater costs $1.50 per day to run due to electric fans used as part of it. But that’s not quite right either.

Looking at my latest power bill, I was charged just over $0.25 per kWh (for those who don’t know, a kilowatt hour is a measurement of energy – the amount used by one kilowatt over one hour). Desk fans generally run at around 75 W, so over 24 hours that would be 1.8 kWh which would cost… about $0.45.

Turns out, the story does actually involve a $1.50 per year cost. That’s how much it takes to run the solar heater’s fans. Apparently, they’re very small and more like computer fans, so they consumer very little power. Although it’s also worth noting that this DIY heating system still cost about $500 in materials to make, so it could be a fair while before you start saving money with this approach.

I can understand how RNZ may have been confused and reported it cost $1.50 a day – that at least sounds plausible – but I’m still struggling to see how the Herald turned that figure into someone’s entire power bill for a whole year without realising just how incredible that would be. Somehow, that mistake must have passed multiple people, made it into the headline, and then been put on the most prominent spot on their website.

Stuff, at least, reported the numbers correctly in their coverage.

A few Facebook comments by Frugal Kiwi – the blog of the couple behind this DIY heater – managed to clarify the situation:

For every case like this, where there’s something incorrect in a news story that might be fairly easy to spot, there will be other inaccuracies that are harder to spot. Mistakes happen, after all. This is a good reminder to think twice about everything you read, especially when something sounds too good to be true.