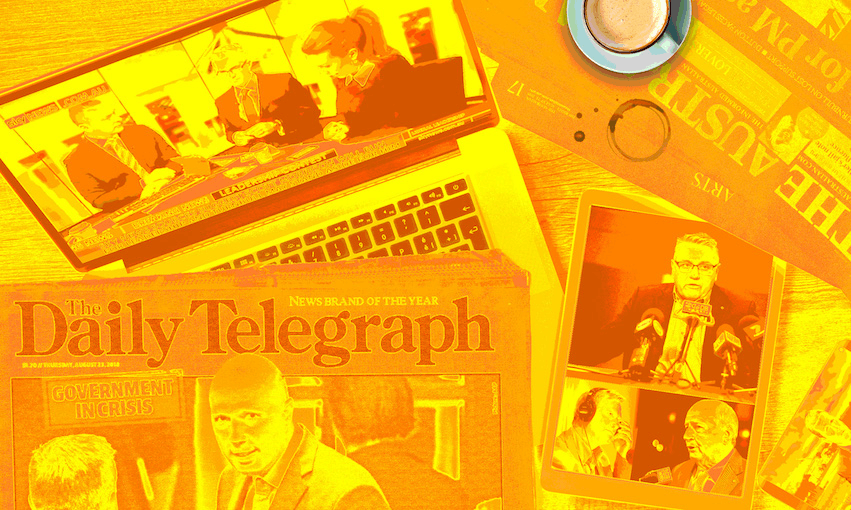 Why is Australian politics so poisonous? A lot of the blame can be laid at the feet of the right-wing media, which has given a megaphone to reactionary forces within the Liberal Party, writes the University of Melbourne’s Denis Muller.

Note: This article was originally published on Thursday 23 August, before the second spill that saw Scott Morrison win the Australian prime ministership.

The polarisation that is devouring Australia’s politics is reflected in the increasingly stark polarisation of the country’s professional mass media.

In the midst of the leadership crisis engulfing the prime ministership, some journalists have found time to start fighting each other over allegations of partisan political activism. Astonishing.

On Channel Nine’s Today show, the network’s political editor Chris Uhlmann accused elements of the media of “waging a war against the prime minister of Australia”.

For this, he singled out the Rupert Murdoch-owned News Corporation newspapers such as The Australian and The Daily Telegraph, the Murdoch-owned pay TV channel Sky News, and the Fairfax-owned Sydney radio station 2GB.

Later, The Australian’s Chris Kenny weighed in, saying Uhlmann was airing gripes from within Malcolm Turnbull’s camp. The clear implication was that Uhlmann was just as much a player in the political game as any other political journalist.

That’s true, but in assessing the media’s role in the current crisis, it is helpful to think about it in two phases.

The ‘Foxification’ of Australian politics

Phase one, which is what Uhlmann was referring to, is the coverage of national politics over the life of the Turnbull government.

There is overwhelming evidence that the News Corp newspapers, Sky News and the 2GB shock-jocks have given encouragement, legitimacy and a megaphone to the most reactionary elements in the Liberal and National parties.

This coverage has been characterised by climate-change denial, the prominence given to racist sentiments such as Andrew Bolt’s recent assertions that Australia was disintegrating into tribes, and alarmist warnings about immigration, typified by references to African gangs.

These all play to the audiences of the conservative element of the Liberal Party whose figurehead has been the government’s destabiliser-in-chief, Tony Abbott, and whose frontbench champion has been Peter Dutton.

Sky News, in its night-time panels, is dominated by people promoting extreme views. Earlier this month, it went so far as to invite a neo-Nazi on air, only to apologise when the heat came on the next day.

Also in its evening line-up is Abbott’s former chief of staff, Peta Credlin, who has used her program to promote Abbott’s brand of reactionary politics and attack Turnbull, especially over energy policy.

Peta Credlin explains how the Coalition has reached this point on energy policy, calling the National Energy Guarantee a ‘policy own-goal’ for Malcolm Turnbull.

On 2GB, meanwhile, the likes of Alan Jones and Ray Hadley have given the Abbott camp not just free kicks – Hadley has Abbott on his show regularly – but have created an on-air culture where outrage is encouraged.

Even this week, in covering the political crisis, Jones referred to key Turnbull backer, Mathias Cormann, as a “nigger in the woodpile”, a highly offensive, racist term of abuse. He later apologised for the word, but it’s not the first time he’s used it.

All this amounts to a Foxification of Australian politics.

It follows the template devised by Murdoch and his late lieutenant, Roger Ailes, in creating a highly partisan television channel, Fox News, which has prosecuted a similar ideological agenda to what the extreme right stands for in Australia.

Fox used to promote itself as “fair and balanced”, as gross an example of perverted meaning as anything Donald Trump has devised.

So much for phase one of the media’s coverage of the Turnbull government.

Phase two is the coverage of the crisis that has unfolded this week.

In this, the professional mass media have, for the most part, provided a sustained, informative and reliable coverage of the kind that the public is entitled to expect.

The fast-moving developments have been relayed swiftly – often in real time – thanks to the speed and on-the-spot access to events that digital technology provides.

The stories are piled up in chronological sequence: not just the basic facts but context, explanation and insights into background events, such as the lead-up to Scott Morrison’s decision to stand for party leader if there is a spill.

There is also minute-by-minute Twitter coverage of the uproar and circus in parliament.

So much is happening that for a blessed moment the media are focusing on reporting rather than fighting among themselves.