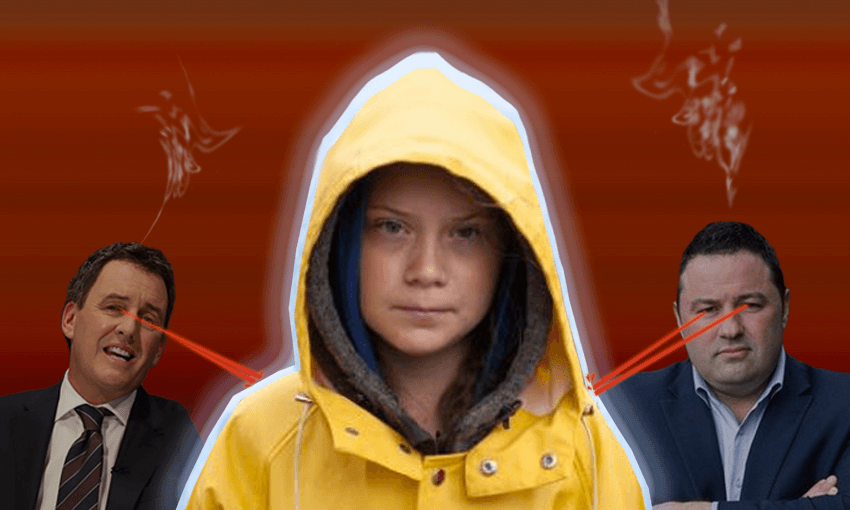 The big boys are here and they want to make it clear: they do not like young women raising their voices. Josie Adams on Mike Hosking and Duncan Garner’s visceral reactions to a tearful 16-year-old telling them to emit less.

Teenage climate activist Greta Thunberg’s global reprimand at the UN this week was delivered in a way that inspired a courageous uprising by the Angry and Disappointed Media Men of the World, and New Zealand would not be left behind, with Duncan Garner and Mike Hosking both stamping their manly feet manfully.

“My message is we’ll be watching you,” said Thunberg to the gathered UN delegates. She then teared up as she described how her generation would be left to rebuild the world. Naturally, this sent Hosking, Garner and co into a froth. I read both of their columns so you don’t have to, sacrificing my brain to bring you this article. Please enjoy the finer points made by our favourite rage jesters.

“Ardern was helped no end by Greta Thunberg who won the award, and it really was an Emmy-winning performance that belonged with the Kardashian on the West Coast the day before.”

It turns out you can put words in any order you want. Has Mike ever watched KUWTK? Does he know its Emmys aren’t for performance? Oh my god, if he can’t even Google entertainment news how the hell is he getting his climate science facts? From the Titirangi rat that lives in his hair? I am deeply concerned.

“Bursting into tears doesn’t make your argument any more cogent or accurate.”

Hugely ironic from a man who makes a living throwing tantrums and whose arguments lead almost invariably towards “Mike Likes Fast Cars With Petrol”.

“All of which is a shame. Because as is so often the case with people like her, she’s an exceptional young woman driven by a passion and that’s to be admired. The fact she sails around the world by herself is equally admirable.”

“She suffers, like so many of her climate change lot, from a fantastic sense of self-entitlement.”

Greta, for shame! This upstart thinks she and her generation are entitled to a full human lifespan. The greedy little bugger believes she’s entitled to not need to grow gills to filter out smog.

“Greta Thunberg will grow into a Jacinda Ardern. They will revel in rhetoric, they will hold meetings, they will invent phrases like ‘we too’…”

First of all, Jacinda should be so lucky. Greta has 10 times the guts. Mike sees the two as similar why? Because they both hold meetings and talk? Because they are women under the age of 50? Have you ever seen Greta Thunberg and Jacinda Ardern in the same room? Makes you think.

Mike ends his diatribe directed at a teenager by complaining that nothing will change despite Greta’s speeches. Whose fault is that? Do you think maybe the media amplifying contrarian trollwarts instead of crisis-mitigating policy could be a problem?

Duncan has a problem with “the rhetoric around climate change”, which suggests it’s a contested topic of debate like euthanasia, or whether onions go in the fridge. The climate ain’t debating you, Dunc. It’s just gonna go ahead and fuck the kids over.

“Let me start with this – if combating climate change is so important and so urgent, why are we as adults not doing anything that resembles action?”

A great question! Let’s – oh, no, OK, you’ve answered your own question.

To be clear, when he says this he’s directly referencing the switch to electric cars – not anything more significantly impactful, like limiting fossil fuel use or moving away from intensive agriculture. Garner can’t seem to envisage anyone giving up motorsports, and that’s why our world is burning.

“She totally overplayed her hand at the UN – too dramatic.”

Sounds to me like your man has never made a speech. Would you rather: be moved or even spurred into action by a riveting monologue, or slouch uncomfortably to the monotonous droning of another “world leader” giving a PowerPoint on why being eco-friendly is actually really good for business?

“Do your bit but don’t become a climate freak. It’s a turn-off and it’s frankly counterproductive.”

I thought being a freak was a turn-on! It’s getting hot in here! Ha ha just kidding. No, in all honesty, I appreciate this. I have done my bit for the climate today by writing a seething rant about two barnacle-headed mainstream media pundits, and honestly, I’m exhausted. I could have recycled something, or reported some actual news, but instead I’ve had to waste my time creating digital waste. You have killed the planet and my brain. How dare you?