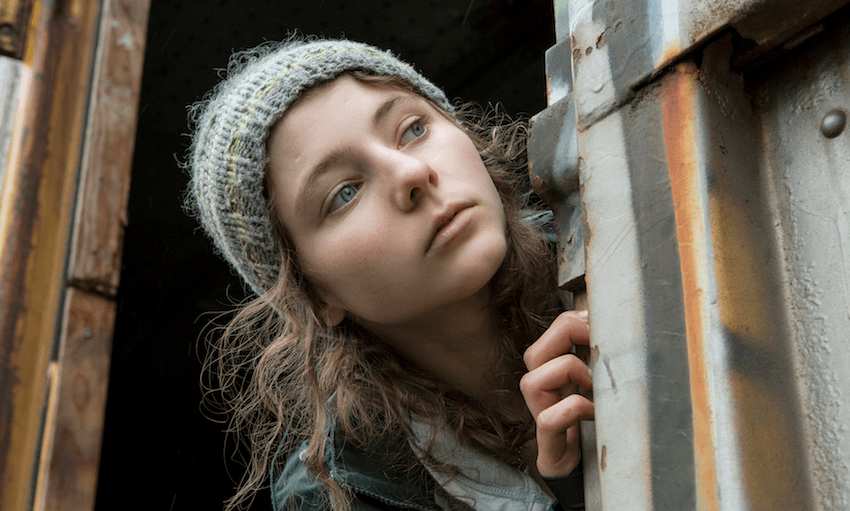 By Gemma Gracewood
Guest writer
Made possible by

Young New Zealand actor Thomasin Harcourt McKenzie is surging to stardom on the back of acclaimed survivalist drama Leave No Trace and Taika Waititi’s upcoming Jojo Rabbit. Gemma Gracewood runs down what you need to know about her.

Not to get too excited about it, but Wellington teen Thomasin Harcourt McKenzie is having a bloody huge year. It began with the world premiere of Debra Granik’s new film Leave No Trace at the Sundance Film Festival, and has continued through a frenzy of media in New York, a jaunt up the Cannes red carpet, a month in Prague on Taika Waititi’s new film Jojo Rabbit, and – breathe, Call Me By Your Name fans – a stint as Timothée “Prince Hal” Chalamet’s sister in Netflix’s forthcoming feature The King, inspired by Shakespeare’s King Henry series of plays.

Because Harcourt McKenzie missed out on turning 18 this week (she was in flight over the international date line, #foreverseventeen) and because Leave No Trace screens in the NZ International Film Festival this weekend, we bring you 5 great reasons to keep an eye on Aotearoa’s next acting superstar. And we don’t mean “acting” like how Winston is Acting Prime Minister. Actual acting. Really, really good acting, actually.

5 Great Reasons to Be Excited about Thomasin Harcourt McKenzie’s Career:

In the long and grisly history of Shortland Street deaths, Pixie Hannah’s was an understated stand-out. After her excellent turn as a young Louise Nicholas in the teleplay Consent, and the delightfully comic lead in the excellent web series Lucy Lewis Can’t Lose, McKenzie Harcourt’s next major role took her out of school for half a year as the nation was introduced to Ferndale’s newest family.

Pikitea Rose Hannah’s time on the Street was always going to be short-lived – probably because they knew it was only a matter of minutes before the rest of the world stole Thomasin from us. But heck, was it memorable. Who can forget the Hannah family championing medicinal weed, by way of chocolate brownies, as cancer pain relief? Also, let’s be honest, Curtis and Jack were kind of a mess back then. Only Pixie was able to tough love them the way they needed. Her death – soon after she rescued Harry Warner from a raging creek and declared her love for him – still brings a tear to the eye.

2. She wore a message to Sundance

3. She got Rebel Wilson to send her little sister an Insta-video.

What a lovely person

Girl loves her baby sister, and when you’re as far away as Prague is from Wellington, you gotta get creative with your postcards. So Thomasin had her co-star Rebel Wilson send this sweet message to li’l sis Davida, via her mum’s Instagram account.

Oh yeah, her mum is that Miranda Harcourt, aka Gemma from Gloss, the fiercest social climber on New Zealand’s best-ever TV series about glamour magazine journalists. And yes, that’s a glimpse in Rebel’s video of Thomasin’s dad Stuart McKenzie, co-director (with Harcourt) of the recent Margaret Mahy adaptation The Changeover. (Read The Spinoff’s review of that film here, witches.)

4. She plays a mean Notturno

Thing is, there are crazily strict rules around playing this particular piano, which more famous and accomplished players have shied away from (not Bic Runga though. Love you, Bic).

Thomasin’s languid version of Edvard Grieg’s Notturno is perfectly lovely, and her flatmate/grandmother Dame Kate Harcourt’s proud listening pose is one of the most precious things we’ve seen in 2018.

Before filming Leave No Trace, Thomasin and her co-star Ben Foster (who plays her PTSD-stricken father, Will) underwent an intensive bush-training course, learning everything from building shelter to avoiding detection to starting fires.

For the latter, one of the best tools in the verdant, soggy Pacific Northwest forests is a “feather-stick” – a length of wood that’s shaved into curls to enable even damp wood to light and burn quickly. Turns out Thomasin is quite the feather-sticker, as Granik told The Spinoff:

“The way that she learnt one skill and then another, and got so good. I mean it became a joke on the set. She became so good at that knife skill. They became resplendent. They were like these art objects. And the skills trainer, who is so accomplished herself, said ‘Wow, you know, there’s feather-sticking and then there’s feather-sticking!’ Now I wish I had some of those feather sticks. Maybe she’ll make me some!”