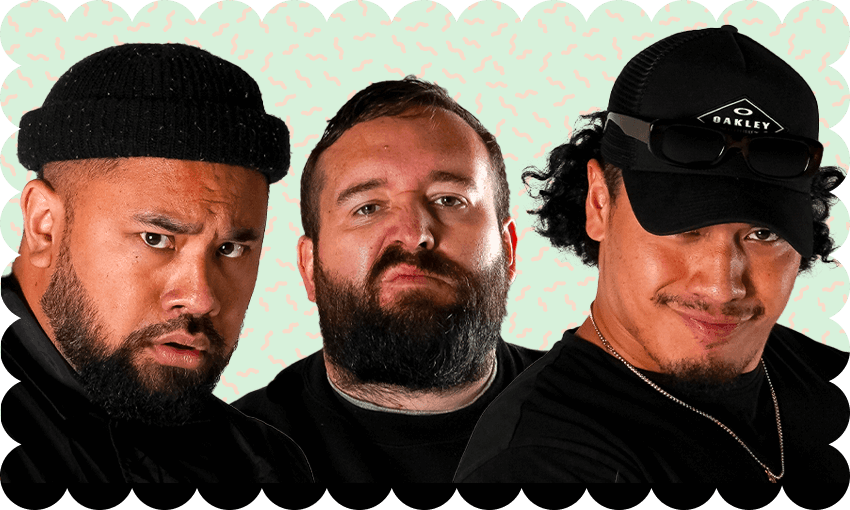 Is professional wrestling a sport? Do you know how to fix your brake pads? And was the former prime minister of Sāmoa really an archery rep? It’s all in a day’s chat for the new hosts of Niu FM’s morning show.

5:24am: It’s the first week of winter in Aotearoa and as I enter Niu FM’s studio, the boys who front The Morning Shack show are in deep discussion about the air conditioning system. “Just make sure to turn it off when we’re on air,” producer Aaron Pulemagafa reminds co-host Tim Dennis. There’s a buzzing sound from the air con unit that the microphones pick up.

The air con inside this very studio was problematic back when I worked at Pacific Media Network from 2012-2015. “Really? That’s over five years ago though,” Dennis says when I tell them. The air conditioning might not have changed, but the studio does have a television now, as well as a new photo wall and whiteboard near the door.

5:43am: As I try to hide a deep yawn, I wonder how the boys are coping with the early morning shifts. “Even though we get to bed on time, our bodies are still adjusting to being up before the sun,” Dennis says. Pulemagafa has his eyes focused on his three-screen computer set-up, as six o’clock fast approaches. Wrestling sound effects play out of the speakers as he watches footage of his interview with professional wrestler Michel “Liger” Mulipola.

6:00am: Pacific Radio News’ first bulletin plays on the air waves and the boys start warming up, imitating Muhammad Ali by bouncing on the spot. Dennis takes a big gulp from his litre water bottle and co-host Regan Foa’i glances at the prep sheet on his laptop. The first song plays after the news and as it fills the studio. “Let’s do this, boys,” Foa’i says. He dances around the studio to wake his body up. “Woohoo,” Dennis responds. “Have a good show, my bros.” Pulemagafa counts the boys in for when the mics turn on. Three, two, one…

6:10am: The studio is full of energy as the co-hosts begin to talanoa on air. Dennis was absent for family reasons the day before, and so he confronts Foa’i and Pulemagafa that he was listening in to the show and was shocked to hear his producer and co-host “talking smack” about him. “I’m the hardest working one here,” he says, staring Foa’i down. Foa’i and Pulemagafa struggle to contain their laughter.

6:30am: Pulemagafa is talking about how he had his brake pads in his car fixed recently. “Apparently it’s easy to fix,” he says on air. “Yet I didn’t know how to do it.” Foa’i shares that he’s fixed his brake pads a couple of times in the past, whereas Dennis was on the same vaka as Pulemagafa. Foa’i poses the question to the listeners. “We want to ask you: what’s something you don’t know how to do, but it’s a must-know or an easy task to do?” Text messages begin to flood in, with someone saying they know how to pick the right watermelon that’s ripe. “Huh, but all the watermelons feel hollow to me,” says Pulemagafa. “But do you ava-car-do?” Foa’i jokingly replies.

7:24am: As much as the boys enjoy having a good laugh at and with each other on air, off air the brotherhood between them all is strong. Pulemagafa is not only a talented sound engineer, he’s also musically gifted. He shares with Foa’i and Dennis that he’s performing later that day at Auckland Girls Grammar School for their Sāmoan language week. “Every performance on stage is an opportunity for someone to say, hey I’ll go check him out on Spotify,” Dennis says encouragingly. “Hard bro, we’ll come support,” Foa’i adds.

8:12am: Global Citizen award recipient Brianna Fruean enters the studio for an interview about travelling to New York to receive the accolade and sitting next to American artist Pharrell. Fruean was recognised for her work as a Pacific climate change warrior and is the first person from the Pacific to receive the honour. The boys sit in amazement. “I’m feeling so inspired right now,” Dennis says. “I used to be a teacher, so it’s great to see role models such as yourself fronting the world stage.”

8:35am: Every Thursday, the boys run a segment called “Draft Punks”, where each selects three people to form their team. It’s then up to followers on Instagram to select who out of the three has the strongest team. This week’s theme is Sāmoan athletes, and Fruean starts off with boxer David Tua, weightlifter Ele Opeloge and former prime minister Tuila’epa Sa’ilele Malielegaoi. “That’s right, he’s competed in target archery at the South Pacific Games,” Fruean reminds everyone.

Foa’i picks rugby legend Jerry Collins, MMA fighter Mark Hunt and double-international Roger Tuivasa-Sheck, which gets the boys excited, giving the nod of approval. Pulemagafa selects NFL player JuJu Smith-Schuster and pro wrestlers The Rock and Roman Reigns, which frustrates Dennis as he had plans to choose the wrestlers too. “Those are my picks, you stole my ones,” Dennis protests off air.

Pulemagafa cackles to himself and apologetically tells Dennis he didn’t copy his picks. The banter continues for the next 10 minutes before the mic turns on. Once Dennis has cooled off, he shares his picks: boxer Joseph Parker, All Black Michael Jones and NFL player Troy Polamalu. “Are your picks actually athletes though?” Dennis challenges Pulemagafa.

9:39am: Michel Mulipola aka Liger from Impact Pro Wrestling NZ calls the Niu FM phone line, confronting them all. Did he just hear someone question whether professional wrestling is actually a sport?

Liger is offended. Pissed off. Foa’i begins to stutter, before Pulemagafa hits pause on the record button and thanks Liger for jumping on board their staged pre-recorded act to play at 9:50am. “It’s all fun,” Foa’i reassures me. “This is a tease to the video we played earlier before the show started, which we’re going to post later today on our Instagram,” Pulemagafa shares. “You boys are too much, take care,” Liger says as the call ends.

10:00am: Pacific Radio News bulletin takes over the speakers as the boys start to pack up their gear and leave the studio. “We’re heading to a bakery for a debrief and go over tomorrow’s show now,” they inform me. Dennis also hosts a popular Instagram blog called Bakery Run, so it’s a fitting meeting spot for the three radio talents.