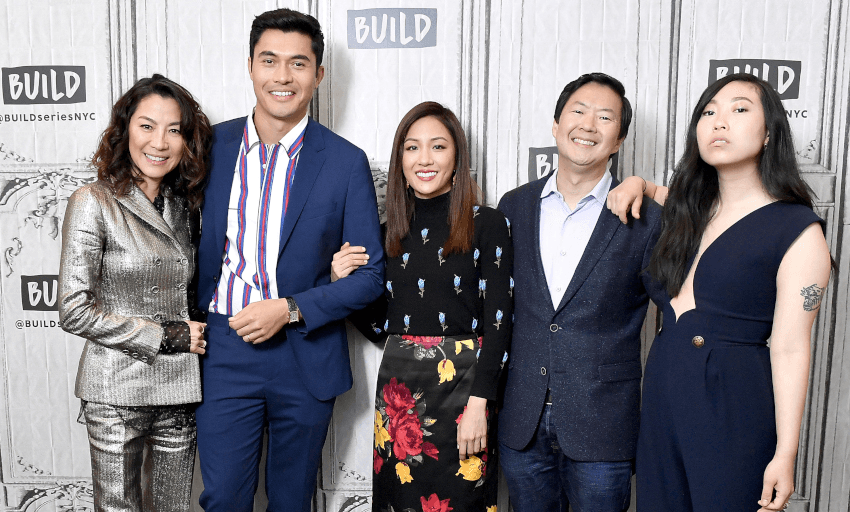 The year was 2000 and the movie was Charlie’s Angels. Watching Lucy Liu kicking ass alongside Cameron Diaz and Drew Barrymore, I sat up a little straighter, feeling a jolt of recognition that was almost physical. It ran through me like a current, all the more powerful for how rare the feeling was.

Back then, at 10 years old, I couldn’t have explained why seeing an Asian actress in the spotlight caused such a gut reaction. At a basic level, it was about familiarity, and a sense of unspoken validation I’d never experienced before. It took until Charlie’s Angels and Lucy Liu for me to know what it felt like to see an Asian face be front and centre of a movie.

As a Filipino kid in New Zealand, having moved here at two years old, this wasn’t something that happened often. I grew up, like many first-generation Kiwi-Asians, grounded by the two cultures that shaped me in ways both tangible and intangible – but nowhere did I see this experience reflected on screen. When it comes to mainstream Hollywood stories, Asian actors (and those of other minorities) are typically relegated to the background.

They might be a supporting character or sidekick. They could be a glorified extra, like the almost completely silent Lilly (Hana Mae Lee) in Pitch Perfect or Jamie Chung’s ‘hot wife’ character in The Hangover films. Or worse, they’re a stereotype like the class nerd or the exotic Oriental, whose entire character is built on their ‘Asian-ness’. And that’s not even going into cases of straight-up whitewashing, where Emma Stone or Scarlett Johansson can play characters with names like ‘Allison Ng’ or ‘Motoko Kusanagi’.

In all these scenarios, the common thread is that Asian actors are shut out from portraying fully realised roles on screen; characters in charge of their own destinies and deserving of their own narratives. It’s the cinematic equivalent of being pushed to the background in every story, of being subconsciously portrayed as ‘other’.

What does that mean for someone like me, a product of two cultures who doesn’t see that represented in the Western media? Over time, it breeds a sense of exclusion because you’re being told your stories and experiences don’t matter – you are, for all cinematic intents and purposes, largely invisible.

In the 1970s, researchers George Gerbner and Larry Gross used the term ‘symbolic annihilation’ to describe how social reality is influenced by what we see on screen. They concluded, “representation in the fictional world signifies social existence; absence means symbolic annihilation”. In other words, television and film influence our understanding of our world and what you see (and how you see it) has impact.

Quick – can you remember the last time you saw an Asian lead in a contemporary Hollywood movie? I can’t, either. After the lightning bolt moment of Charlie’s Angels, those roles were few and far between. ‘Symbolic annihilation’ is a great way to put it, because eventually, you become numb to the lack of diversity when there’s an endless stream of films with mostly white casts.

You stop expecting to see people who look like you on screen, and when it does happen, you start getting nervous about how their storyline will play out. Will they be the butt of the joke? Will someone in the audience laugh seeing an Asian man kissing a white woman on screen? Will there be vicious online backlash to the character later, like there was for Rose Tico (Kelly Marie Tran) in Star Wars: The Last Jedi? You feel for these characters because you know, deep down, they’re just like you – they look like you, and the way people perceive them (or ridicule them) is in some small way connected to how they might be seeing you in real life, too.

It also means your options for representation are more limited. In a 2015 study of 800 popular films, just 3.9% of characters were Asian, and of the top 100 films, not one had an Asian lead or co-lead. This means, to paraphrase Master of None co-creator Alan Yang, when you’re white you get a full range of cinematic heroes to look to – think Indiana Jones, Rocky Balboa, Ellen Ripley, Lara Croft. If you’re Asian, you have Sixteen Candles’ Long Duk Dong.

That’s why a film like the upcoming Crazy Rich Asians still feels quietly revolutionary in a #woke 2018. An all-Asian cast, helmed by an Asian director, focusing on Asians getting to live their best lives in a fabulously glamorous, contemporary setting? Deal me in.

Based on Kevin Kwan’s bestselling novel, the story follows Chinese-American university professor Rachel Chu, whose life is turned upside down when she realises her boyfriend Nick comes from one of Singapore’s wealthiest families. Judging from the trailer that dropped earlier this year, we’re in for a treat – awkward confrontations with your boyfriend’s mother, a sassy best friend, haute couture gowns and the classic fish out of water storyline as Rachel tries to navigate her new world.

These are all familiar romantic comedy tropes, but the difference is the cast we’re seeing. For the first time in 25 years, we have a studio movie starring an all-Westernised Asian cast. These actors aren’t playing the nerd or the fetishized temptress. Instead, they’re playing multifaceted roles at the centre of the story – and for a movie obsessed Kiwi-Asian like myself, that kind of on-screen validation has a much deeper impact than your average Hollywood rom-com.

The lack of representation on screen isn’t confined to Asian cultures, of course. It’s a symptom of a much wider problem in Hollywood – but if movies like Crazy Rich Asians can get made, and blockbusters like Black Panther can bring in over a billion dollars at the box office, maybe with time the power players will recognise there’s both social and financial rewards to producing more diverse stories. Hopefully, that means future generations won’t have to wait 10 years to see a face that looks like their own leading a studio film, and instead of fading into the background, our stories will get their turn in the spotlight, too.