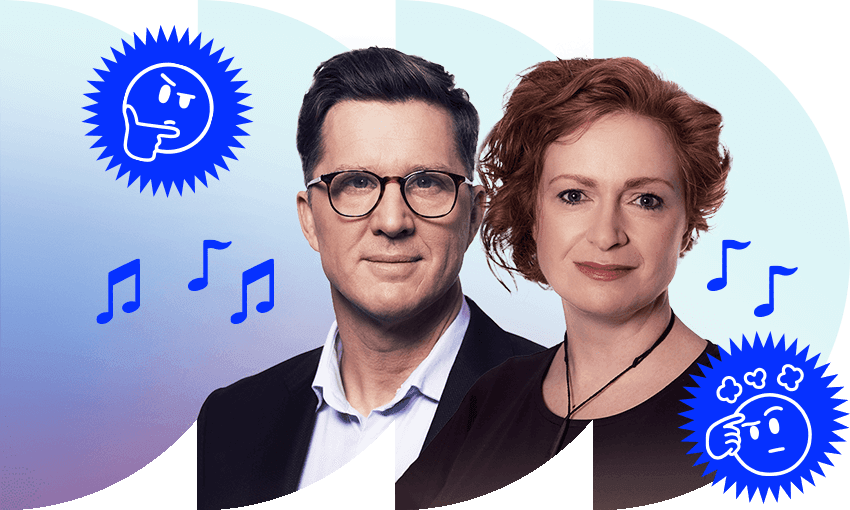 ‘A slap in the face’: RNZ’s new theme music made in Australia

In the final week of New Zealand Music Month, RNZ has debuted a new theme for its news programmes – produced by a studio in Sydney. Alex Casey speaks to local music industry members angered by the move.

RNZ’s recent “sonic refresh” has provoked outrage from the local music industry in Aotearoa, with critics calling the move “tone deaf” and “a slap in the face” from the publicly-funded broadcaster. Beginning last week on May 28, during the final week of New Zealand Music Month, RNZ’s flagship news programmes Morning Report, Midday Report and Checkpoint launched new theme music, the first update in years. The outrage? It was created by a Sydney sound design studio called Song Zu.

“Everyone is quite shocked by it,” says Polly McKinnon, co-chair of the Screen Music and Sound Guild of New Zealand. Established in 2020, SMSG represents composers and designers who work for film and television in Aotearoa, as well as other media projects. “This is the perfect example of why we needed an organisation that can advocate for us,” she says. “We have this incredible talent pool here in Aotearoa, and there just seems to be this lack of confidence in our local talent, sometimes from our filmmakers and obviously now from our public broadcaster.”

The Sydney-based design company that made the theme worked in collaboration with New Zealand composer Jim Hall, but McKinnon says there was no need to take the production to Australia. “It was the right call for them to utilise a New Zealand composer but, that being said, it was the wrong call to have gone offshore to a studio in Sydney in the first place – we have everything we need here to produce world-class work.”

Prior to the update, the Morning Report theme had remained the same since 2014, composed by Wellington-based company Plan 9. David Donaldson of Plan 9 was equally shocked to hear that they had chosen to make the new music offshore. “I switched the radio on and heard they were doing an update, and then I heard them say it had gone to this Australian ad studio,” he says. “I was just kind of dumbstruck. You’ve got to be joking.”

Sydney-based Song Zu also created the music for Australian Public Broadcaster SBS, with RNZ head of news Richard Sutherland saying last week that they wanted the new brand to be comparable to BBC’s new bulletin theme. This, Donaldson says, was a mistake. “Why do we want to sound like the BBC or the ABC or some generic news thing? Instead of thinking outside the box they climbed into a bunch of smaller and smaller boxes.”

Although he believes that Plan 9’s theme was probably due a refresh, Donaldson says RNZ’s decision was “a lost opportunity” to promote local musicians. “There’s a lot of good musicians and composers and studios, and it’s not as if we are all really busy,” he laughs. “We’ve all just come out of Covid so it’s not like they tried ringing and everyone went ‘no, we’re too busy’. They could have had a really interesting collaboration.”

RNZ said in a statement that both local and international options were considered for the new theme. “This project required specific experience and in the end preference was given to sound designers who had completed recent original contemporary work with a public broadcaster.” It said Song Zu were chosen “because of their impressive original sound portfolio” and that the studio worked closely with Jim Hall, “an outstanding local composer and a specialist in the use of Māori instrumentation in his original works.”

Hall, who has been in the industry more than 40 years after emigrating to Christchurch from England as a child, used Māori elements including taonga pūoro and porotiti in the final piece.

The poor choice of timing also sends a deflating message to local musicians during New Zealand Music Month, says McKinnon. “It’s a slap in the face for our local composers and sound designers,” she says. “It’s so tone deaf – the month is all about celebrating the talented and skilled bunch of people that we have here.” Donaldson agrees. “They can sit there and have Music 101 and promote New Zealand Music Month and speak te reo, but it still says that New Zealanders aren’t good enough to prepare the music for our national radio broadcaster.”

The Spinoff understands that SMSG sent a letter to RNZ on the day the news was announced, and is now in conversation with head of news Richard Sutherland.

In response to the criticism, RNZ says that it “has always been, a strong supporter of musicians and the music industry in Aotearoa New Zealand.” RNZ Music broadcasts performances from up to five local acts a week, and 30% of the RNZ playlist is New Zealand music – with higher numbers expected from May. “This of course excludes specialist content, documentaries, podcasts, and interviews with New Zealand musicians and industry personalities,” the statement reads. “RNZ is proud to support the music of Aotearoa New Zealand.”

McKinnon says that she could name “literally hundreds” of local musicians who would have been capable of revamping RNZ’s music. Although she says “the ship has sailed” on this particular theme, she would welcome reflection from RNZ management. “They need to think about if they are going to champion our talented people right here at home, or still stick with this cultural cringe thinking that you have to go overseas to get quality work.”