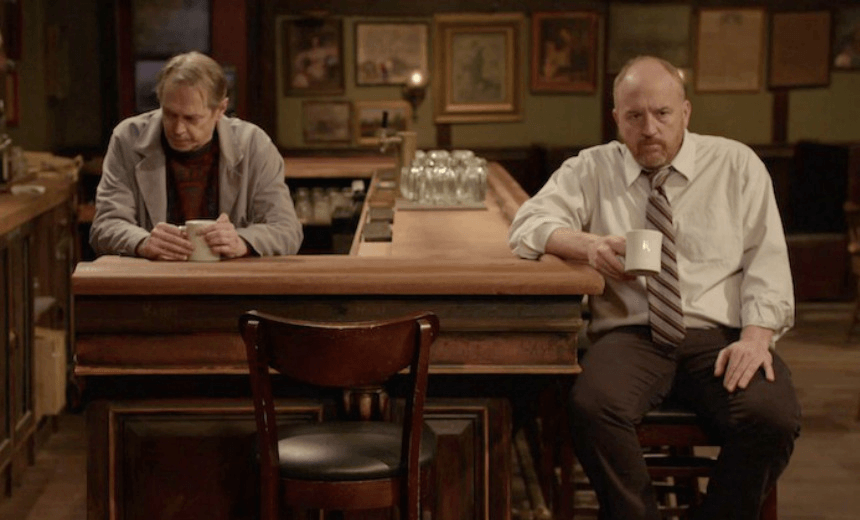 Aaron Yap watches Louis C.K.’s new online series Horace and Pete, and asks if the off-putting, experimental style is what lies beyond the “peak TV” age.

Did Louis C.K. hear us grumbling? Just a few weeks ago when FX chief John Landgraf spoke at the Television Critics Association press tour in California, he addressed the future of C.K.’s critically loved show Louie.

Distressingly, his answers were both gloomy (“He certainly hasn’t promised me further seasons of it”) and reassuring (they still chat about doing more seasons). As a fan, I’m certainly not done with Louie. Knowing C.K.’s restless ingenuity, and willingness to tweak the show to accommodate his creative impulses, I could easily see it going on for another few more years without losing its freshness.

Then on January 30 – without any warning – C.K. dropped a brand new thing on us: Horace and Pete. The timing was fortuitous for Louie-starved fans balking at Landgraf’s statements. In the bigger scheme of things, one could argue that the release signaled a momentous occasion in television.

The digital-era delivery method of cutting out the middle man (it’s available to download directly through C.K.’s website) isn’t groundbreaking in itself. It’s commonplace in music now, and a sensible route for many difficult-to-market independent filmmakers (see Shane Carruth’s Upstream Color). But I can’t recall the last time we’ve had an established TV showrunner distribute their work in this manner before. The surprise factor, which has drawn amusing comparisons to the internet-breaking business savvy of Beyoncé, is enormously bracing too.

I like this how this casts C.K. as the supreme auteur. On top of acting, writing, directing, producing, he’s now controlling marketing and distribution. He’s putting himself in the shoes of a TV watcher. On his site, C.K. talks, with his characteristic candor, about the delight of seeing something “without knowing anything about it because of the promotion”.

I’m 100% on board with this. It’s been a long-held peeve of mine that the modern trend of bombastic, fear-driven marketing and hype has ruined the element of discovery in film and television. Long before you’ve come into contact with the final product, an endless torrent of teasers, trailers and fluff pieces will leave you feeling like you’ve already seen the goddamn thing in a previous life.

Discovering Horace and Pete on its own terms was pretty fulfilling, but if you’re expecting a rehash of Louie – don’t. This isn’t it. Whereas Louie flirts with experimentation, Horace and Pete is an experiment. The dive bar setting summons the spectre of Cheers, but this isn’t a sitcom.

Shot quickly in a multi-camera format, the show has its formal roots in vintage television plays, your BBC2 Playhouses and Armchair Theatres (in the credits, C.K. thanks Brit kitchen-sink miserablist Mike Leigh, who began his career making these). The direction is static, much less adventurous and glossy than today’s cinematically-inclined shows. The takes are longer. Halfway in, an intermission title card pops up.

You could watch Horace and Pete and ponder: could this be what lies beyond “peak TV”?

It’s a challenging, even off-putting work. Horace and Pete suggests C.K. liberating himself from not having to give audiences what they expect, but also wanting to keep them as close to his developmental process as possible. The speed of its production means much of episode one plays like a choppy first-or-second draft rather than a completely realised vision. The 100-year-old Irish pub at the centre of the show sometimes feels like a festering repository for unused, unsharpened stand-up material.

The characters often operate as mouth-pieces, spouting C.K.’s caustically observant repertoire of contemporary frustrations. Targets include ironic hipsterism, modern communication and the absurdities of politicking (the live quality of the show is particularly pronounced with the up-to-the-minute references to the current presidential race). That said, Horace and Pete grows less scattered as it progresses, and amounts to a rueful, bitterly funny drama grappling with the foibles of family, tradition and generational divide.

C.K. has never been an actor with the widest range – his bar owner Horace isn’t too far removed from his awkward pushover in Louie – but he’s ably supported by a brilliant, seasoned-pro cast. Steve Buscemi is all meds-poppin’ jitters as co-owner Pete. Edie Falco brings some punchiness as their feisty sister who’s fighting for her right to sell the bar – the closest thing to a “plot” that materialises during the show’s 67 minutes. Alan Alda is exceptional as the other Pete, a curmudgeonly barkeep who gets the bulk of C.K.’s hilariously sardonic dialogue. SNL’s Aidy Bryant and deadpan genius Steven Wright also appear in smaller parts.

Horace and Pete is not easy-going. It’s talky, messy. You won’t fall in love the characters instantly. I’m not even sure C.K. wants us to. But there’s an invigorating, unpredictable alchemy at work here. If C.K. can harness the immediacy of the televised-play to match the acerbic wit of his writing and the commitment of his actors, we could well have another unique creation on par with Louie.

Click here to watch Horace and Pete, or below to experience Louis CK’s “fresh and unpredictable” sitcom Louie on Lightbox