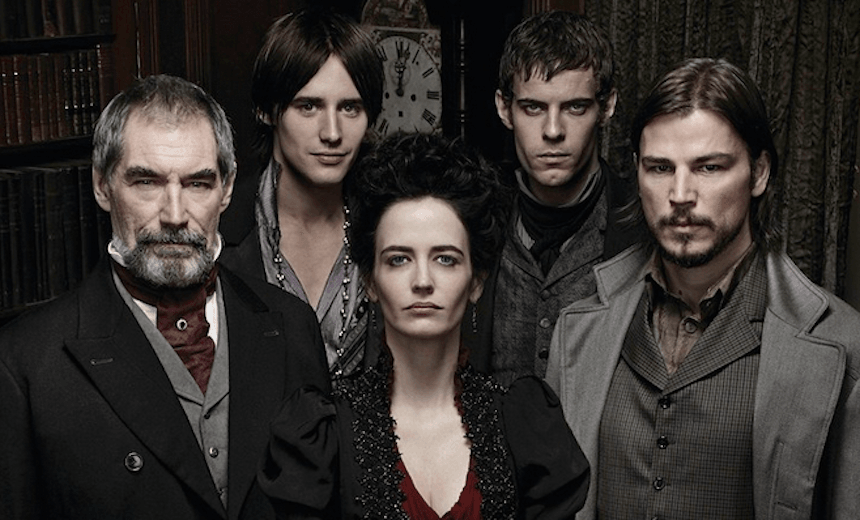 For Monitor this month, Aaron Yap argues why you should bravely enter the “alluringly sensual and generously gory universe” of Showtime’s Victorian horror Penny Dreadful.

It’s a pretty good time for TV horror fans at the moment. If you have a favourite type of monster, it’s likely being catered to. The Walking Dead has zombies, The Strain vampires, Hemlock Grove werewolves, Bates Motel a teenage psychopath, and anthology series American Horror Story will give you whatever genre it decides to be that season.

Debuting last year, Showtime’s Penny Dreadful offers the novel option of seeing a coterie of classic monsters and literary characters hanging together into one alluringly sensual and generously gory universe. For sheer atmospheric beauty, Penny Dreadful is perhaps matched only by Hannibal. This Victorian England-era mash-up, created by Skyfall screenwriter John Logan, swipes its title from the cheap, sensational, disreputable serials of the day.

But there’s absolutely nothing cheap about this show. Its Game of Thrones-level production values are transporting, otherworldly and astoundingly cinematic, as persuasive an argument that the gulf between the small and big screen is now thinning. It’s possibly even non-existent.

Logan’s fondness for the fictions of such luminaries as Mary Shelley and Bram Stoker – and their Hammer/Universal movie counterparts – is abundantly clear. Like Alan Moore’s League of Extraordinary Gentlemen, part of the fun lies in how those well-established icons – Victor Frankenstein, Mina Harker, Dorian Gray to name a few – are recontextualised and taken into new, unexpected directions.

Penny Dreadful isn’t afraid of getting silly and outrageous, but generally opts for a grounded, slow-burn tone. Imagine the decorous air of a Merchant-Ivory joint that’s occasionally unsettled by grisly, fantastical happenings. But the array of spooky seances, demonic possessions and vampiric bloodletting wouldn’t count for much if there wasn’t an emotional anchor, and Logan does a credible job of capturing the haunted inner worlds of his characters.

Drawn together at the uneasy dawn of the Industrial Revolution, the core players are a deeply dysfunctional ensemble. There’s intrepid explorer Sir Malcolm Murray (Timothy Dalton), cursed medium Vanessa Ives (Eva Green), American gunslinger Ethan Chandler (Josh Hartnett) and morbid surgeon Dr. Frankenstein (Harry Treadaway). They’re less a wisecracking Avengers-like superhero team, and more a support group for moody, tortured ghost-busters. But at the close of the first season, there is a genuine sense they all need each other, united in an ever-treacherous battle against the Dark Side.

Season two’s opener “Fresh Hell” carries off immediately after season one’s finale “Grand Guignol”. With a previous arc involving the search for Murray’s daughter and Ives’s childhood friend-turned-vampire Mina now completed, the show turns its attention to several new threads. These include the promotion of a minor season one character, spiritualist Evelyn Poole/Madame Kali (Helen McCrory, visibly lovin’ it) into the role of New Big Bad.

Poole’s a cackling, wicked, duplicitous witch, planning to nab Vanessa for the yet-unseen Master Lucifer. This means Green, easily the show’s molten centre as far as acting goes, doesn’t get much of a breather before she becomes another twitchy, traumatised mess. By episode’s end, she’ll be attacked by shape-shifting baldy demons, speaking the “devil’s tongue” and mutilating her thumb to paint blood on the floor.

Meanwhile, Ethan is struggling with his werewolf problem, having massacred everyone who was unfortunate enough to be drinking at the Mariner’s Inn in “Grand Guignol”. He has no memory of it, just the blackouts and blood on his lips. A pair of Pinkerton detectives are snoopin’ around, hoping to question the only survivor: a “facially lacking” witness who may be able to expose Ethan’s identity. Still, after Vanessa’s attack, he has vowed to stay to protect her at the Murrays’ mansion.

Penny Dreadful does old-fashioned gothic splendour better than anything on TV right now. Owen McPolin’s cinematography is consistently sublime. “Fresh Hell” features a brilliant shot where the camera roams the twisting, lightning-streaked hallways of a castle as we hear a chill-inducing voice sing the English folk traditional ‘The Unquiet Grave’. It finishes with the reveal of Poole literally having a bloodbath. Bathory and Bava would be proud.

That macabre tableaux is upstaged in episode two “Verbis Diablo”, an otherwise subdued hour which mostly delves into the dead mythical language that Vanessa has suddenly begun speaking. Again, it revolves around the devious Poole, who leaves no doubt of her evil by placing a freshly deceased baby’s heart inside a doll replica of Vanessa. There’s nothing as jaw-dropping as the return of Frankenstein’s Creature from season one as yet but, judging by the way things are going, it’s probably reasonable to assume things will get a whole lot more gruesome.

The Creature, Caliban, or now his preferred moniker, John Clare (beautifully portrayed by Rory Kinnear), remains the most compelling Penny Dreadful character. His relationship with Victor is a complex and thorny one (“What is Dr. Frankenstein without his creature?”). He fosters a strong desire to be “normal” in a way that his frightening appearance can’t afford him.

The show continues to humanise John. A visit to a wax museum for employment is as affecting a sequence as any we’ve seen him in. The richly philosophical, Blake-quoting conversation he has with Vanessa, whom he meets for the first time in a cholera-riddled soup kitchen, results in a rare instance where he actually appears happy – and hopeful. Let’s not forget Bride of Frankenstein, “Lily” (Billie Piper), has awoken too, and the guy’s chomping at the bit to play house.

Episode three, “The Nightcomers”, exposes a minor narrative issue with the show thus far. As a piece of stand-alone television, it’s superbly acted and directed, a flashback episode that sheds some light on the the nature of Vanessa’s past encounters with the witches. Patti LuPone is excellent as the Cut-Wife, estranged sister to Poole and an abortionist who plays a mentor-type figure to Vanessa.

The problem is the placement of such an episode this early in the going. I was engrossed, but also found myself missing the rest of the gang and wanting more narrative push. Strangely enough, I wanted more Dorian Gray (Reeve Carney). Never the most useful nor interesting character, he popped up briefly in “Verbis Diablo” as if to remind us the show hasn’t forgotten about him.

“The Nightcomers” also reinforces the commonly held notion that Penny Dreadful is basically The Eva Green Horror Show. No other actor/character has been allocated as much screen time as Eva/Vanessa (how’s about a Sembene backstory? I know that behind that servile facade is a rousing yarn for the ages). But I’m not complaining. Green has never not been amazing on the show. Every second she’s on screen is electric.

Still on the fence? Look at this shot:

If some part of you is remotely tingling at the sight of it, please do yourself a favour and dig into Penny Dreadful. It’s stylish supernatural pulp of the highest order.