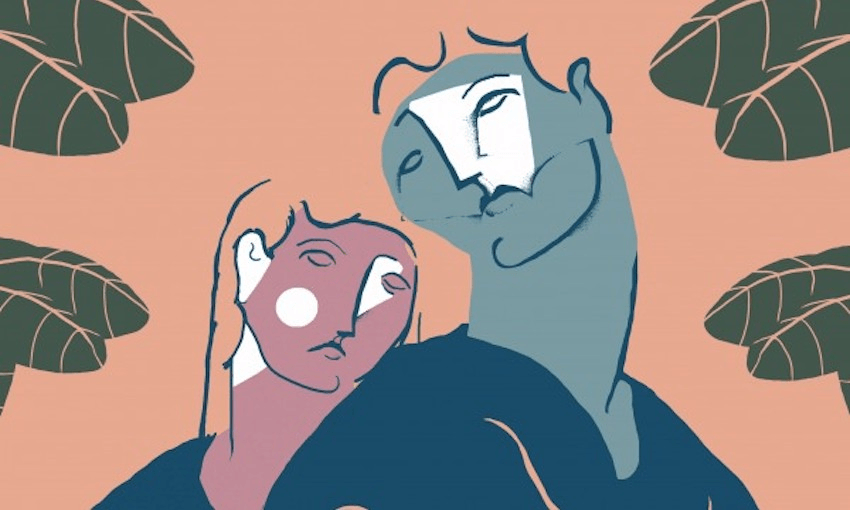 ‘Where Were You When I Was All You Needed?’ was the last song written for this album. It’s one person realising the fondness that developed through absence, only developed because of absence. The album returns to this distance theme throughout so I liked having it as this establishing track at the front of the album. In my mind, it was going to be this power-pop song in the style of The Nerves or something but in hindsight, some of the verse guitars are quite new wave.

Once we decided it was going to be the first track we built the intro on to the front of it with one of our producer Tom’s synths. On past records, and the way that I write, I normally will just keep stacking backing vocals and then take some out and become a perfectionist about it, but on this album is that I didn’t have the space to do that and it was a production decision to have Paul and Theodore perform most of the backing vocals rather than just have me stack them ’til I went mad.

Wallace Line was a lyrical idea that I’d been mulling over for at least a couple of years after I’d read about Wallace’s Line in Indonesia. It was a faunal boundary marked out by Alfred Wallace when he discovered that species either side of this 32km channel between islands were remarkably different, with Asiatic species to the West and more Australasian species to the East. It got me thinking about the effect of our environment on us and extrapolated the effect to the disintegration of a long distance relationship. It’s a habit to analogise ideas to consolidate my understanding of them.

‘Bacterium (Look at Your Motor Go)’

This is an older song we’ve been playing for a few years. I originally wrote it for our band Baraka and the Finish Hims after I’d been reading about the bacterial motor being presented in US courts as evidence for creationism and an argument for it to be taught in schools. The flagellum was argued as so irreducibly complex that it could only have been created with intent for its purpose.

Over time and touring the final section grew into an extended instrumental outro, Ben and Paul usually turning it into some abstract stuttering thing while I tried to keep the rhythm. After Theodore joined the band the song really thickened out. We actually tried to record it for our first album (Bacterium, Look at Your Motor Go) but we just couldn’t get it to vibe. We used so much of our recording time on it we just had to abandon it and move on.

This is kind of an extension of an ‘alien anthropology’ idea from Mortality (A Million Years Ago) on our first record. Imagining the traces of humanity being pieced together by anthropologists in a post-human world. And we’ve all been buried with our most prized and defining possessions to take them into the afterlife – our smartphones. This book Galápagos by Kurt Vonnegut had put me into this zone. It’s like an apology for the human race a million years in the future.

I really like the way the band builds through the instrumental section and then there’s like a bar when it all falls out into the last verse. I think it’s one of these moments that nobody really communicated but everybody understood.

‘Stuck In My Head’

I’d had this chorus sitting around for a while and wrote the verses a bit later. I’d been feeling this strange sensation that I was bound by my own body and was thinking about how we’ll never truly understand exactly what someone else is going through.

I wrote these lyrics not too long after moving to Auckland and, as a song, it went through a few different iterations. It was a real thing that happened on the way home when nobody would help this guy that had fainted and vomited at the back of the bus. I don’t think it was apathy. I think it was maybe the ambiguity of the situation. Was something really wrong? Was it serious enough to act on? Someone else will do something about it? More a diffusion of responsibility. I recently saw a Herald headline about a pedestrian who had been knocked over and nobody stopped to help. It was screaming “bystander apathy!” That same claim sold newspapers in New York in the 60s after Kitty Genovese was murdered but I don’t think it’s as simple as that and thankfully they had included comments from a Psychologist saying so.

This one is definitely existential. What defines us in an ambiguous, indifferent universe?

This song became very different from its original demo, it also began as a slow song and I think Theodore used an EBow on this and that’s how he got some of those massive guitar effects. Also was a good opportunity to use a woodblock.

This is a break-up song. I was reading about how physicists have essentially concluded that time travelling to the past is impossible which was vaguely disappointing. But I’d also been going through this crisis about what constitutes knowledge, which I still haven’t resolved, so I went through a moment of like “fuck scientists”, confirmation bias, etc.

I played Tom’s 12 string on this one, we were tossing up whether to make it an acoustic song or a sparkly jangly one.

It’s a jealous rant about our friends who live in Australia. I feel like it’s the most I’ve screamed in a song. There was this thing when you lived in Dunedin, most people who leave first go to Wellington and then inevitably Melbourne. There’s a brilliant song by Louis Smith called ‘I Am Dunedin’ and one of the lyrics is “I am Dunedin. If I try enough someday I might be Wellington. I am Dunedin. Everybody runs away to live in Melbourne”.

Fake Flowers is how we tell a story about ourselves, to ourselves, in the construction of our identity and our lived reality. That identity is not necessarily congruent with how other people experience us or the world, and if that reality falls over, we can pull down the walls of the whole set, and you can see the guy standing there with the boom mic. For example: for practical purposes, I don’t think it matters to our everyday lives that much whether we have free will or not, but I don’t want to be ignorant of anything. This song, for me, is just registering awareness of that fact.

‘Dogs at the Dinner Table’

Dogs is a bit of angst about how we’re slaves to the work week because we can’t resist the Psychology of marketing. One time I was walking through the mall and I had been learning about the techniques some salespeople use and how to avoid them so I thought I would cash in on the free hand massage from Dead Sea and then walk away. One of these techniques is to offer some exorbitant expensive product or bundle that you will never buy and then you will feel like walking away with something that feels very cheap is a good compromise. I went in knowing this and before I could understand what was happening I had bought some lotion and felt really disgusted with myself for falling for it.