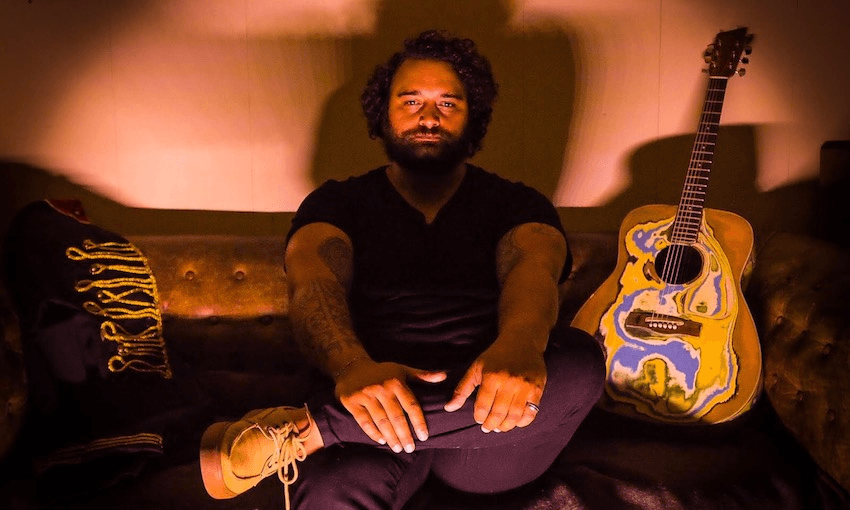 Troy Kingi wants you to know he’s a buzzy dude

Troy Kingi is two albums deep into a very ambitious mission. The musician and actor plans to release ten albums across ten genres in ten years. He kicked things off in 2016 with the 23-track Guitar Party at Uncles Bach, an album that went on to win him Best Māori Pop Artist and Best Māori Male Solo Artist at the Waiata Māori Music Awards in September. This time around he’s making psychedelic sci-fi soul, and you can bet things get weird.

After a solid eight listens I feel confident in saying Shake That Skinny Ass All the Way to Zygertron is best served on repeat. The first time through you let it wash over you, second time through you can vibe with it, and by the third listen you might be able to start piecing the puzzle together, something you’ll continue to do, never really knowing whether or not you’ve cracked the narrative as intended, or ended up down some other path that’s equally out of this world. I caught up with Kingi as he was getting ready for the album’s release, by which point I was three listens deep, intrigued, feeling less uptight than usual, and armed with several pages of urgently scrawled questions I needed answers to.

(And yes, you do recognise him from Hunt for the Wilderpeople.)

Shake That Skinny Ass is a real contrast to Guitar Party at Uncle’s Bach. Why such a strong pivot?

I’m probably going to be sabotaging fans from the last album! I’m not saying I’m a great musician, but I know great musicians always tend to change it up, they never roll with the same thing. For me, the main reason for the different genres is to keep songwriting interesting. It’s easy to find a formula that works, but then you get into a comfort zone. If you put yourself in a box like, “I’m gonna be sci-fi 70s soul”, and that’s your mindset, you’ll start writing different songs.

Do you remember there being a moment when you decided that 10 albums would be the measure you’d use?

It was before Guitar Party came out. I wouldn’t call it an epiphany, but I was watching a Tarantino film, maybe Django, and also on Google looking at heaps of interviews with him. I’m a hardout Tarantino fan, and I remember him saying he wants to make just 10 films, so if people hear about him after he’s died, they’ll look for his body of work and rather than looking up a band and not knowing which was their final song, people will just see 10 movies that he was really proud of. It’s kind of the same thing I wanna do. As far as the different genres go, it keeps it interesting. I’m looking forward to the next one which will be really early roots reggae. I listened to a lot of 70s soul leading up to this album, so that will be my smorgasbord of music for the next year.

It seems like a good way of avoiding the sophomore album curse.

Changing it up definitely puts you in a different headspace, but it was fricken challenging. I booked the studio to record it and was told I needed to get it done in the next two weeks to have it ready for release at the end of the year. At that point I’d only written three songs and had two weeks to finish the rest of the album. I had the context and tunes, but I hadn’t put anything together.

It was a pretty tough two weeks. I can’t really do anything until I put the kids down, and by then it’s about 9pm, when most people just wanna sit down and have a cup of tea. You have to really want to do it, but I’d get into a zone. I like going for the really whack ideas and trying to make them not so whack. That will give the song a bit of edge, and some kind of angle that hasn’t been heard much in New Zealand.

Did you work with any of the same artists from the previous album or was it a one man show this time round?

I had one of my best mates Mara TK again. Our whole thing is 70s soul, so we’ve really been bouncing back and forth on both of our projects. We get a lot of our inspiration from bands of that era, as well as a bit of psychedelic stuff. The 70s has a feel about it that you don’t really hear these days, an unpolished rawness.

So where is Zygertron and why do we need to be there?

I was camping in the Far North in January, and when everyone went to bed my brother and I would go out onto the beach to look at the stars. I’d pull out one of the song names and we’d discuss it, giving it a backstory as if it were a short story or film. We’d come up with these characters, and they became the basis of the album. Over the course of writing it I realised the songs were all linked together and that all the characters could be condensed into just three. It’s a massive journey that would take hours to explain, but the first song ‘Aztechknowledgey’ follows from a song called ‘Gold Shoes’, about a boy born in the Amazon with golden feet. His father is the only dude who can read these hieroglyphics that say a child born with golden feet will be the new Messiah and save civilisation, but people will also want to kill him. He ends up sending his son to the moon in a pod that’s underneath the temple. It gets kinda weird like that.

You won a couple of awards in some big categories at the Waiata Māori Music Awards, did you have any suspicion you might pick those up?

Those were actually the first awards I’ve ever won. I went thinking I was gonna have dinner and a good time, then ended up walking away with two awards. It’s cool to be recognised by your peers, but in the end I know I’m probably going to release some albums that will rub some people up the wrong way.

I knew I just had to get the first album out there because it was starting to weigh down on me. Same with this one, once it’s out then I can start focusing on the next one. There are some things I just have to do, regardless of awards or if people like it.

How do you hope Shake That Skinny Ass will leave people feeling?

Nostalgic. I really tried to emulate The Temptations, Al Green, all those dudes. I hope that when people first hear it, they think it’s from the 70s and go “Shit, I’ve never heard this before.” I hope they think it’s ancient. It’s got a lot of layers so hopefully they go deep on it and come up with their own idea of how everything links up. I want people saying, “That Troy is a buzzy guy.”

Shake That Skinny Ass All the Way to Zygertron is available to stream on Spotify now.