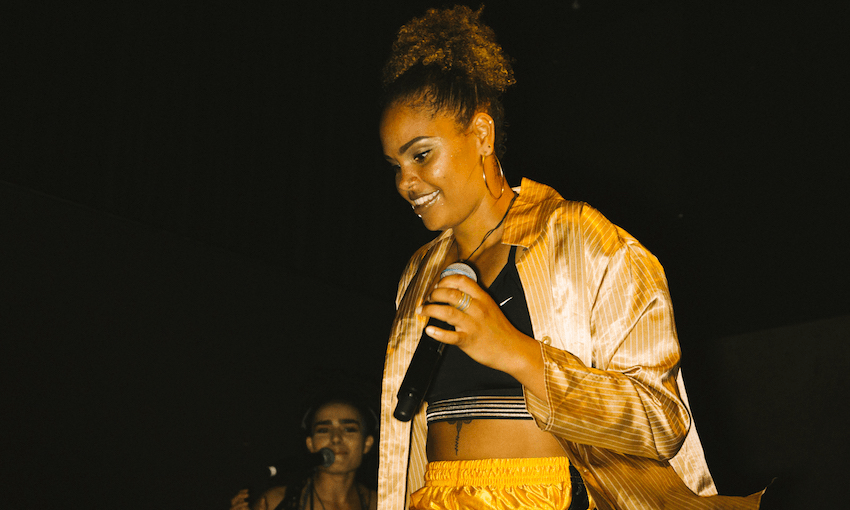 Miriama Aoake on JessB’s Block Party, an event which celebrated both the release of JessB’s debut EP and women of colour in New Zealand hip-hop.

Last Friday, Galatos played host to a sundry of performances curated by JessB, coinciding with the release of her debut EP, Bloom. The night served to both celebrate and exhibit the potency of women of colour on the hip-hop spectrum, an expression best housed within a block party. Creating an accessible space, organically, is crucial, evident in the relationship between performer and audience. The reciprocal fire exchanged at Galatos on Friday suggests JessB’s kaupapa is keeping the hearth lit.

Going to a gig solo is a balancing act. On the one hand, it is mired in trepidation and nagging anxiety. On the other, it is a comfortable resignation that your own company will suffice. Walking in, I scanned the room and saw JessB. She cut a distinctive figure, not solely because of her height. People gravitated towards her – she wasn’t stressed, at least not outwardly. At once, she was behind the merch table, in conversation, embracing someone, and keeping the night running to schedule. The collaborative discipline needed to hurl forward together, refusing to leave anyone behind, was immediately apparent.

Every detail conformed to the tradition of block parties to ensure the multiplicity of the community is represented. Free entry, with an RSVP. The kai was abundant. Early on, the pavement outside acted as a default smoking area, but as more people arrived and spilled onto the street, the space was disrupted and reclaimed. There was a pervasive, inviting sense of belonging.

Inside, Meer had the floor. I stole a seat and watched the dancing unfurl. Familiar faces emerged and withdrew, splitting into factions of four or five that kept changing. People moved differently but ultimately in unison. Meer was good and deliberate and can morph four times or more every 16 bars. She descended onto the floor mid-song and rubbished the stage as the icon of hierarchy. Her set over, the crowd dispersed. Outside, more were arriving. The street front wasn’t delineated by any physical boundary and continued to expand.

Upstairs, people were jostling for a front row position. Coven held the gaze of the entire room in suspension. The energy threatened to combust, tear the walls down, relying on an equilibrium between performers and audience. It was a frenzy at Coven’s mercy, a subconscious force that transformed stillness into movement.

Everything was happening at once. Downstairs, upstairs, outside. JessB had clearly worked hard to ensure there was a place and a buzz to suit everyone. She was resourceful, securing sponsorship from Spark and Vice helped transform Galatos into a home, sustaining the kaupapa of a commitment to be an inclusive and safe space for everyone to express themselves free from judgement. It was difficult to negotiate – public spaces are always contested territory – but the demography of those in attendance was reflected by those performing.

Inside, Silva MC was blaring upstairs while the basement is commandeered by the Katayanagi Twins. Both were operating in symmetry. If there was a kick from the bass downstairs, the floor upstairs was shaking. People were wearing a sheen of sweat that glowed, though the dancefloor wasn’t so tightly compacted that it became restrictive. There was an unspoken respect that entitled everyone to their own space but again, operating within a collective.

Sitting outside, I listened as Ladi6 manifested on stage. As a regular on the circuit for years, she was at ease and in her element. Again the crowd ebbed and flowed – any tension had long since evaporated. Ladi6 was the veteran – people knew her words and bounced them back and forth with her and between themselves. Her presence signified something greater than herself: If a door is closed it is kicked down for everyone and not just the self. It’s honouring those who come before you and dismantled barriers and to share the mic, rather than pull the ladder up behind them. It’s a responsibility all the performers tonight carry with flair and do without having to think about it. This is the kaupapa in practice.

Time had dissolved as JessB descended from upstairs to perform. On stage, Half.Queen was comfortably sequestered behind the decks. Friday was her birthday, and she was lucent. JessB danced amongst the crowd and as she neared closer to the stage, the flash of phones lit her path. She remained open and approachable but didn’t lose focus. Understated but obvious to all was the subtle acknowledgement of oral tradition. It wasn’t fabricated, elusive or conceptual, it was real and tangible. It was pouring out of her body, the only vehicle suitable to balance the dichotomy of light and dark in her narratives. She carried herself with awareness of where and who she is, simultaneously absorbing and living her moment.

What transpired at Galatos on Friday has the potential and momentum to evolve into a regular occurrence. The kaupapa of hustling and sharing resources was evident, fitting within a wider scope fermenting in Auckland to push for accessibility and visibility. JessB, and all who performed and attended, successfully proved beyond doubt that diversity can be materialised, both on the lineup and on the dance floor.

JessB’s Block Party was sponsored by Spark and Spotify. Listen to all the music you love on Spotify Premium, it’s free on all Spark’s Pay Monthly Mobile plans. Sign up and start listening today.