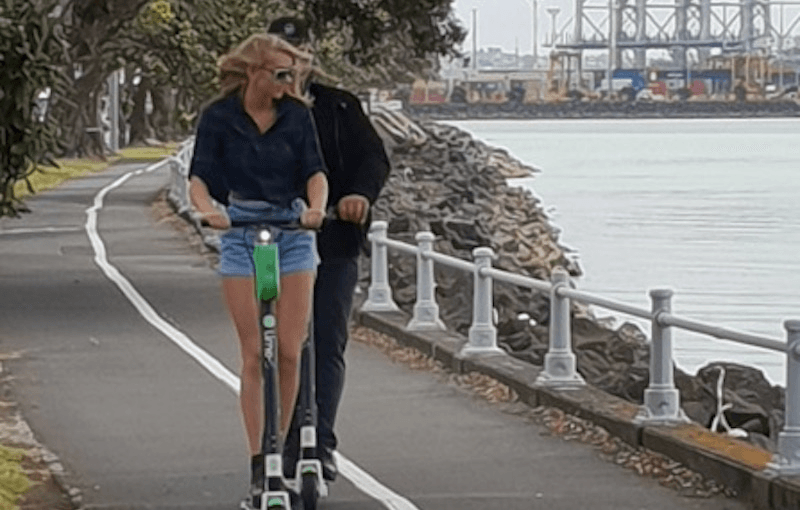 Even Taylor Swift got in on Auckland’s Limes.

Even Taylor Swift got in on Auckland’s Limes.

Ahead of her stadium gig in Auckland, New Zealand, the pop star took a pay-per-minute electric scooter for a ride along Mission Bay, according to Ben Prince-Saxon. We talked to Ben to find out more about this epochal moment.

EVEN MORE CRUCIAL UPDATE, ONE WEEK LATER: Confirming prank suspicions, it was revealed on the final episode of Jono and Ben last night that the so-called “Taylor Swift” was in fact a hired lookalike and so-called Starbucks employee Ben Prince-Saxton was a plant. “It’s fair to say that there is a lot of soul-searching going on at The Spinoff’s headquarters this morning,” said the The Spinoff’s Managing Editor Duncan Greive. “We are assessing all our systems and checks to ensure that such an incident will never again blight our otherwise spotless reputation for hard news coverage.”

“It’s important to note that this was no accident. It was a very deliberate attempt to bait other media into publishing a false story, by a direct competitor – Jono and Ben. The scourge of fake news is a plague on our times, and media organisations must band together to fight its propagation – not engineer elaborate stunts designed to take in credulous opponents. If Jono and Ben had not just announced its permanent closure, The Spinoff would be complaining to the Commerce Commission, and demanding its cancellation.”

CRUCIAL UPDATE, 7.37pm: A high-level human has contacted The Spinoff to say: “I just met Taylor Swift and she has never heard of a Lime Scooter. She’s been sleeping all afternoon.” The Spinoff is unable to confirm whether this individual was Edward Snowden but our team of researchers note with a whiff of desperation that 11.30am was not this afternoon. More as it comes to hand.

ALSO UPDATE, 6am: We’re not saying this is irrefutable proof a pop star Limed along Tamaki Drive yesterday, but here’s the state of play mid-Mt-Smart-concert. Draw your own conclusions.

Ben Prince-Saxon was early for work at Mission Bay this morning when he announced that he’d seen Taylor Swift riding a Lime scooter. He posted the photos to Twitter with the caption “Wtf just saw @taylorswift13 on a Lime Scootering through Misson Bay?! Tf hahaha buzzy shit”. He then began his shift at Starbucks, and she continued on her way.

Was it really her? Was she headed to Mt Smart for her concert tonight at the whopper Lime price of $12.90? Was she trying to sample the delights of Mission Bay Oporto? Was she trying to make a point about the fear-mongering over the new shareable transport option on the streets of Auckland? Was she trying to get a Ms Cracker shot at the fountain? Undaunted by the doubters, Ben spoke to The Spinoff in an exclusive interview, to take on the crucial questions.

Is this picture real, what’s going on?

Yeah, I didn’t believe it at first myself, but I was like “woah! Sheeet!”

Talk me through it, when did you first see her?

And what were you doing?

I was just chilling before work. I had 30 minutes before work in Mission Bay.

Where do you work in Mission Bay?

Holy shit! So talk me through it.

What do you want to know?

She just Limes past you?

(Snort laugh.) I’m not entirely sure this is real?

Do you have any more photos than those two?

Nah, I don’t sorry, obviously Limes are pretty fast. The first shot I took because it looked a little like her from that distance, it was like “ehhhmm ok.” Then as she got a little bit closer I was like: “oh shit it’s actually her.” Then I took the photo, because it looks more like her.

Who do you think the guy is behind her?

No idea, probably just someone watching her back.

Could you see her expression? Was she having a nice time on the Lime?

She was smiling, enjoying the breeze.

And you didn’t think to talk to her?

I have respect for people when they are famous. It’s not every day she comes to New Zealand and I was just letting her enjoying her time here.

Nah, it was pretty quiet.

Basically as soon as I took them.

Did you watch where she was going? Or did you just take the photos and move on?

I took the photos then watched her continue across the path.

How fast would you say she was going?

I’ve never been on one, have you been on a Lime yourself?

I’m assuming you’ve had lots of calls from people since you tweeted that?

You’re actually my first because I’ve only just finished my shift.

Did you go and tell everyone at work?

What were people’s reactions?

No one believed me to be honest. “You’re talking shit, shut up.”

Then did you show them the photos?

Yeah and then they were like, “wooooaahh that’s crazy.”

Is that the most famous person you’ve ever seen?

Are you going to the show tonight?

Nah. I’m not a big fan of her, but if you see someone of her calibre you’re like “woah!”

So what’s your full name?

Is there anything else you want to add about your experience? It’s quite an amazing story, Taylor Swift on a Lime!

Author’s note: it is possible this is all an elaborate Jono and Ben prank, in which case we consider ourselves owned.