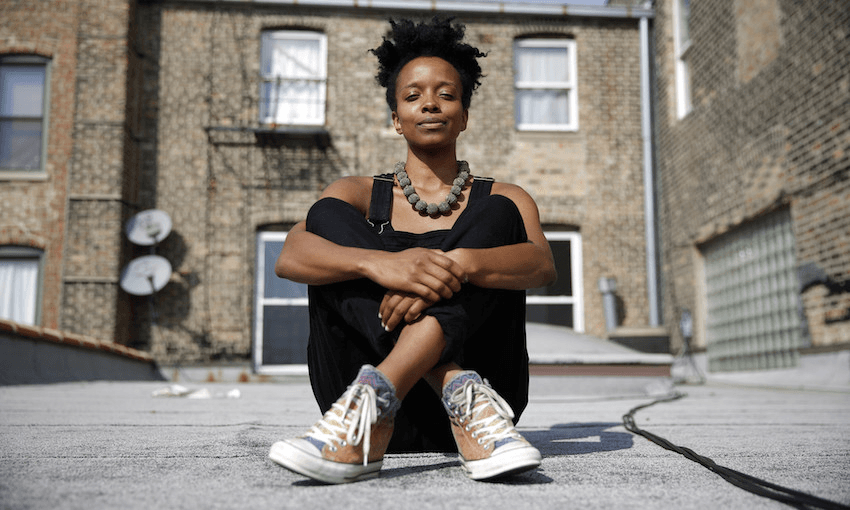 By Saraid Cameron
Guest writer
Made possible by

Jamila Woods has had a meteoric rise to success, collaborating with artists like Chance the Rapper and Noname on her debut album Heaven which was named in the top 50 albums of 2016 by Pitchfork. But she’s just as much of a heavyweight in less mainstream artforms. She started her career as a poet, publishing her first book in 2012 and still teaches classes and edits poetry anthologies in Chicago.

For brown queers on the internet like myself, Jamila Woods first came into view when she lent her music to her best friend Fatima Asghar for the HBO series Brown Girls. And HEAVN has become an album I’ve returned to time and time again – it is catchy and fun, so good while with friends, but also intimate and personal, so good to play when alone or whilst crying. If I ever cried, which I don’t.

How successfully Jamila Woods spans multiple spaces is just fucking rude to be honest, and her new music videos are so beautiful and thematically layered that they actually get better the more you watch them.

I was lucky enough to talk to Jamila Woods about altars, sampling like a poet and what we can learn from keeping our ancestors close ahead of Legacy! Legacy! dropping on May 10.

The album is very autobiographical, I think of each song as being a self-portrait through the lens of different people and what they’ve taught me. Each song on the is named after a person that has been inspirational to me – different artists and writers and thinkers.

Do you do this a lot in the music you write? Do you reference artists who’ve inspired you and try to think of them in a new way, or is this a new direction for you?

I’ve always really loved sampling a lot, whether in poetry or music, the idea of the hip-hop practice of taking something and re-contextualising it.

But I was trying to push myself with this project to sample in a more innovative way or at least maybe approaching sampling more like a poet. So not sampling a beat or lyrics, as much as sampling a quote from an interview, an image I saw or a poem that I read – and sampling these in a non-traditional way. So that’s kind of where the impetus started.

When I wrote the first song ‘Giovanni’ that was really a cover of Nicky Giovanni’s poem ‘Trippin’, I was trying to experiment with different ways into writing songs.

So obviously you can really see the difference in the way that poets and musicians sample work because you started out as a poet. How did you transition into working more as a musician?

I always loved singing and I sang a lot in choirs growing up but I always thought of myself as more of a choir singer as opposed to someone who could be a solo professional singer.

I think it was when I started doing poetry at high school. It just gave me a lot more confidence in my voice as a writer and performer – doing spoken word poetry and things like that. So after I returned to singing I was writing my own songs and then I started to realise ‘oh, if I’m not comparing my singing to other people, if I’m just writing songs for my voice to sing them’, then there’s nothing I lack, really.

It’s just about what I can do with what I have, so it was kind of like poetry gave me the confidence to pursue singing in a different way.

That was kind of a journey. Then I was in a band for years (M&O) and then after my band ended was when I started working on HEAVN, my first album.

What would be the ideal setting for someone to listen to this album in?

For me it would be listening in my bed right next to my bookshelf with my favourite books scattered around me.

Or some pictures of ancestors, you know, people in my family who mean a lot to me. Just listening to it surrounded by things that remind you of your lineage, whether that’s familial lineage or artistic creative lineage for whatever it is that you do.

Do you think if we keep reminding ourselves of where we come from and who we’re trying to honour that we just do better generally?

Yeah! It gives me a lot of confidence and it gives me intention.

Confidence in the sense of, a lot of times it’s very easy, especially as a creative person or anyone putting something you make into the world, it’s easy to become kind of like absorbed in yourself, ‘oh people didn’t like this thing’ – or feeling insecure, which makes a lot of sense, but when I think about the people. Like, I was just at this museum where I learnt so much I didn’t know about the civil rights movement and the stakes of the things my ancestors had fought for me to able to… it just kind of broadens the scope, you know.

And then it’s not so much about ‘oh did I say the wrong thing here’, ‘or is this song good enough’, but it’s more about a longer history and a longer journey that I’m on.

So in that sense it gives me more confidence to not focus so much on my insecurities.

And what do you have planned for the live show that accompanies Legacy! Legacy!?

A lot of what inspired the songs was watching interviews and listening to interviews with different people so I want to incorporate a lot of the audio from those interviews and actually invoke the voices of the actual people within the show. Also just playing with lighting.

That’s the idea that I’ve had. It may not come across super literally but that’s how I’m thinking of the stage, as an altar, and of how to invite the energies of these people in.

So you’ll definitely be including part of that very famous interview with Eartha Kitt – on love and compromise?

Yeah, I love that.

You’ve got lots of themes of self-love within your music – how a relationship has to be about what kind of love is healthy for both people – why is this something you keep returning to?

I always love this quote I heard from a poetry teacher of mine which was – “you don’t always have to enter a poem through the front door” – so I think that – you can write infinite poems about the same thing and enter that story or that idea in a different way each time.

When we talk about self-love – especially when people say “in order to love someone else, you gotta first love yourself”, it kind of makes it like a finite thing, like you can just do it one day and it’s done.

But actually it’s a life-long journey.

So I’m on that journey and those songs are me processing and re-processing and learning new things along the way. I feel like that’s something I’m going to continue trying to work out in my own brain and the songs will keep being markers of different things that I’m learning along the way.

I’m really obsessed with the keyboardist in your video for ‘Zora’, who is she?

Her name is Ami, she’s my musical director, she’s also a singer, a producer, she makes her own music and she produces for a lot of people. She also teaches piano and arranges all my live shows. She’s amazing.

Do you work with the same people each time, making your music videos?

All the videos for the album so far have been with Vam Studios, which is a Chicago based production company and they really focus on having their crew be people of colour and queer people so it’s very intentionally creating safe spaces on set. They just do amazing work and I love collaborating with them.

Are you excited for people to finally hear your album?

I’ve never finished something and waited so long to put it out, so for six months it’s been done so it feels very exciting that people are going to hear it soon.