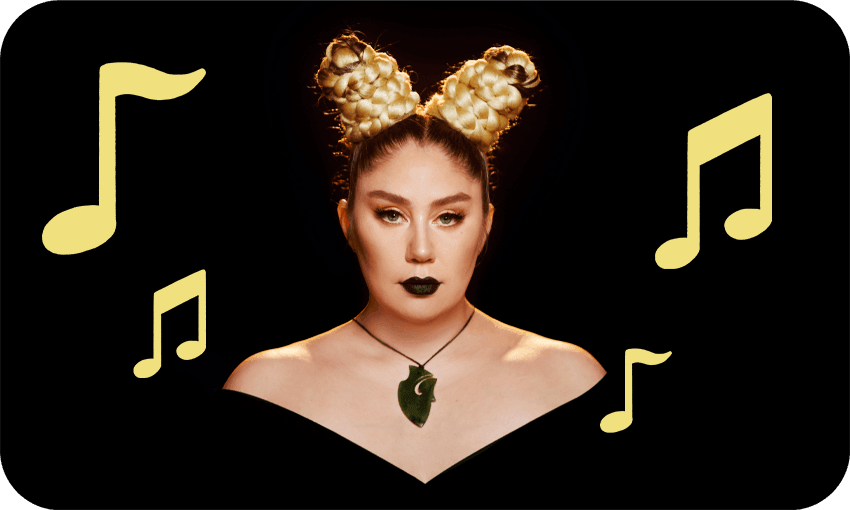 By Theia
Guest writer
Made possible by

Theia talks us through the nine tracks on the stunning debut album from her new project Te Kaahu.

I composed the waiata on Te Kaahu O Rangi in te reo Māori as a tribute to my tūpuna wāhine – they are songs my grandmothers and aunties would’ve cried to, danced to, and loved. Lyrically they rely heavily on kupu whakarite, pepeha and whakataukī; sonically, they are a nod to waiata I have been surrounded by all my life – both waiata tawhito like mōteatea, pao and karanga, and waiata from the 50s and 60s which my kui grew up with. This is a weaving together of the ancient and the new.

The artwork is a nod to the Māori portraiture of the 1800s in which Māori were often romanticised as the “noble savage”. I find it painful to see the hurt and loss in my tūpuna’s faces as they sat for portraits in the midst of oppression, war and land confiscation. Here my gaze is unapologetically fixed on the viewer: “You will not ignore me nor my people”. With me, in my arms, is the ever-present kaitiaki and taniwha of a kaahu, a manu rangatira representing divine power and authority. This portrait is the manifestation of the Te Kaahu kaupapa: to heal, restore and empower my people.

The personification of my female ancestors – most notably my grandmother, Rangirara, as kaitiaki in the form of a kaahu (hawk) surveying her territory of Waikato. Te Kaahu O Rangi means both “Rangi’s hawk” and “hawk of the heavens”.

“Waikato taniwha rau, he piko he taniwha” – an ancient tribal proverb meaning: Waikato of a hundred taniwha (chiefs/spiritual guardians), at every bend of the river, is a taniwha.

He waiata aroha mō te wahine is a love song for any woman you love and hold dear.

“Pūmau tonu koe, karekare te tai. He toka-tū-moana taku taupuhi” – You remain firm in rough seas, as a rock stands in the ocean, my beloved.

A song about the unending love I have for my grandmother, Rangirara, through the use of kupu whakarite (metaphors) to describe the elements of her nature and her name.

He waiata tangi, a song of lament. E taku huia kaimanawa means “My treasured one”. A waiata written for someone you have lost, depicting te hononga tangata, the thread of human connection that can never be severed even in death.

“Tukuna atu koe kia rerea ki tua o te ārai noho ki te pō” – I will release you to soar, beyond the veil to rest in the night.

A hymnal which honours the style of music often heard on marae in tangihanga and pōwhiri. Most hymns are translated from English to reo Māori and so I wanted to compose an original, which tells of the love and comfort found in the compositions of old. It takes me back to singing at my grandmother’s side.

My grandmother was raised on the banks of the Waikato, at our marae, by her mother and her mother’s mother. My great kui, Mite Te Aho Karaka Kukutai, has spoken passionately about the powers of our awa. She fought to ensure that the government worked alongside mana whenua to protect Waikato’s wellbeing. In this waiata I have woven in Nanny Mite’s whakaaro with tribal pepeha and metaphors to show Waikato’s strength as a motherly force.

Pai Maarire – goodness and peace. This is a song to Te Ua Haumēne, the founder of Pai Maarire, which is the religion my family and iwi have observed for hundreds of years. Te Ua encouraged our people to fight for our rights and refuse, through resistance, the confiscation of our land at the hands of the Pākehā.

“Whakaorangia mai mātou i ngā tauiwi, kia toa ai” – We will be delivered from the colonists to be victorious.

For hundreds of years Taupiri (my ancestral mountain) has fostered and looked after my ancestors from birth and serves as their final resting place in death – my great grandparents and beyond are buried in her embrace. When I climb Taupiri to visit my nannies, I feel so held and safe.

“He rangimārie i ngā wā katoa koe e taku maunga tapu” – You are of peaceful and caring nature at all times, my sacred mountain.

This is the companion to the opening of the record, about the kaahu being the guiding force for this record and my life: he manu rangatira – a chiefly bird. Held in the highest esteem as a spiritual guardian but also embodying chiefly qualities of strength and mana.

“Auē tōku kaahu he maimai aroha mōku, mō ngō whakahekenga” – Oh my kaahu, you are a symbol of love for me and for your descendants.