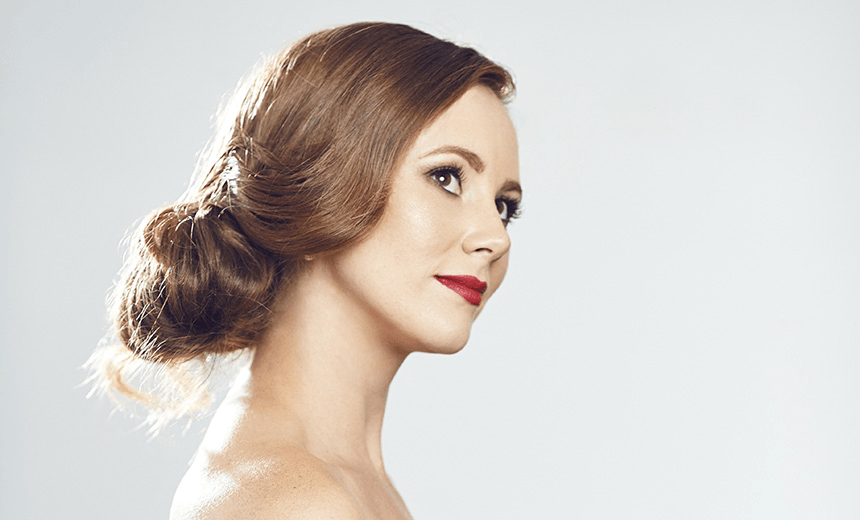 Classical crossover singer Rebecca Nelson is kind of a big deal right now. Her debut album, Poppies & Pohutukawa, has been sitting around the top of the album charts since its release in early April, and is currently ahead of The Chainsmokers, David Dallas and that Six60 album that will be charting for all of eternity.

The Christchurch-born singer is so bubbly you could mistake her for the host of a children’s TV show, and has years of busking under her belt. When she performs live, she rattles off stories about meeting the All Blacks on the streets of Ireland, copping flak from Prince Charles, and a 101 lecture (in a good way) on the meanings of the songs of World War I.

With the kind of virtuosic voice some argue we don’t hear enough of in 2017, Nelson has spent the past few years carving a name for herself as the lead vocalist for the Royal New Zealand Navy band. It’s a gig younger generations might recoil at the thought of, but one that has won her a passionate fan base (most of whom are old enough to still buy CDs), and led to her being signed to both a major label and a big name manager. It’s an equation that, given the ‘state of the industry’ in 2017, raises eyebrows, but Nelson’s achievements thus far can’t not leave you in a state of awe.

You’ve just released your debut album. What’s happened in your career to get you to this point?

I was a busker for four or five years in New Zealand and then around the world. When I came home from living in Ireland, I was spotted busking on the street by the Royal New Zealand Navy and they signed me up as their reservist as their official singer. From there everything has just all fallen into place. After going to Gallipoli in 2014 and learning a whole lot of beautiful songs, I was really inspired to lay down the tracks for an album. Sony jumped on board in 2016, by which point I was able to incorporate the music I had sung on two other trips, Gallipoli in 2015 and The Battle of Somme in 2016.

You’re signed to Sony and represented by Scott Maclauchlan of Saiko Management – how did that relationship come about?

That was another funny story. There are moments in your life where you sit back and think ‘Wow, I really was in the right place at the right time’ and this was one of them. I was on a cruise ship because I do cruises as a guest soloist, and later ended up in the UK for a contract, and on my very first one was the musical director for the Queen. He was a guest speaker talking about his time in the military, so naturally we got talking and he came to my show. He loved it which was awesome, but from there I went home and started annoying Scott via a friend because he knows one of my mates. I got his number and contacted him the same week that he was in the UK having a meeting with a label. The label ended up asking him if he’d heard of Rebecca Nelson. It turned out to all be via this guy on the cruise ship who had been mentioning my name to people. Having called him and emailed him two days prior saying I’d love to meet with him and this guy bringing up my name he was very intrigued. We had a meeting as soon as he got back to Auckland and then started working together. It was crazy.

I’d always said when I reached a point in my career where I can have a manager I want the best, so I went out to target Scott first and everything aligned. From there we started talking to Sony and they jumped on board after our first meeting.

That’s such a good story!

Whenever people ask about how I got here I have to ask, ‘Do you want the long story or the short one?’

So how did classical crossover come about for you? Did you ever consider being a popstar or has this always been what you’re drawn to?

I was drawn to this music at a really young age. I was 12 when I started singing and it was mostly because of 1960s musicals: Carousel, South Pacific, and even older ones. Hayley Westenra was also the year above me at Burnside High School and started coming up when I was about 15 or 16, so seeing her do so well made me want to follow.

How would you describe classical crossover for people who haven’t come the genre before?

It’s a classical voice singing any genre, so we can sing musicals then do a jazz or rock song. A common example is people finding a pop song and changing it to Italian, you’ll still be able to recognise the tune, but they’ve made it a little more classical.

I’d imagine lot of young people probably don’t understand the pull of classical music, and in particular the kinds of war songs you sing, what would you tell someone who was a bit of a sceptic?

I think with music people need to understand that it always comes from somewhere. Even today people have always been inspired by someone, whether it’s Michael Jackson or Nat King Cole. For me, I’m inspired to keep war songs alive. I think what’s great with New Zealanders is we’re learning more and more about our history, so there are more younger people turning up to dawn services on ANZAC day. The music is definitely playing a part in that.

Does performing at those big services ever become less of an emotional experience?

Oh God no. I’ve been singing anthems for a long time, but it wasn’t until I sung at Gallipoli that I realised what it was like to sing for your country. When you sing at any commemoration it’s always emotional because you’re singing it for a reason, the reason being to remember.

Contrasting that, what’s it like singing at a sold out rugby test match?

That’s a different kind of anthem. I like to describe singing at an All Blacks test as a rock concert. Everyone is singing with you, but you’ve got a 2-5 second delay before their voices hit you. It’s awesome because being a classical singer I’m never going to have that kind of audience, so it’s very much my rock concert.

You released your album less than a month ago and it’s already charting on the NZ album chart, how has the feedback been?

It’s been really great. It’s nice because I’ve been around for a while but in different images so people know me as the navy girl, but they don’t recognise my face unless I’m in uniform. Seeing them get really excited when they put two and two together has been awesome.

And you’ve got an original song on there too don’t you?

Yes. ‘Poppies & Pohutukawa’ is an original [written by Chris Mullane], and the rest of the songs are tied in with what I’ve done in New Zealand or what I’ve done overseas.

How did that song come about?

I was asked to sing it last year in France for the Battle of Somme and we just had so much fun singing it. When we got back about 50 of the band were asking me to record the song, but I was already one step ahead and knew it had to be on the album. There were no questions asked, so it was just making sure I asked the right people. It’s great because when people hear it they love it because it’s just so Kiwi.

So of all the different roles you juggle, what would you say is the best part of your job?

Definitely singing for our country at commemorations and meeting the veterans. It takes a really special person to be in the military and serve our country, so being able meet them and say thank you so much is incredible. Most of them think it’s nothing, but they’re telling you stories of their submarine blowing up in WWII and I’m thinking ‘this is just insane’. Being able to thank them for what they did for us is pretty cool.