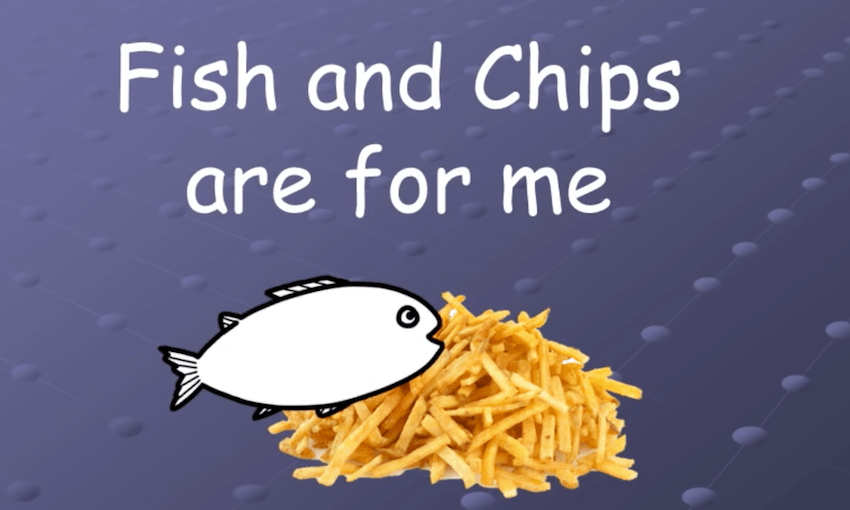 Sausages and Custard: An ode to the weird and wonderful Kiwi Kidsongs albums

By Allanah Faherty
Guest writer
Made possible by

Allanah Faherty remembers Kiwi Kidsongs, a series of government-funded kids’ albums that were sung in primary schools all over the country for 20 years.

As a kid, there was little honour greater than being in charge of the song lyrics at a school assembly. Whether it was holding up the giant sheet of paper in front of the school (if you were tall enough), or being allowed to use the OHP (carefully sliding up the transparency in time with the music), it was a deep privilege — and set the scene for a bloody good time on a Friday morning.

Our asses may have been sore from sitting on the hall’s cold, wooden floor, but our hearts were full as we sang about our dad’s love of rugby, a dog’s hatred of leftovers and everyone’s favourite takeaways. The songs were weird and funny, and if you’re like me, you probably didn’t realise that they all came from a collection of albums called Kiwi Kidsongs.

Produced by state-owned enterprise Learning Media, the Kiwi Kidsongs albums were released yearly and distributed to every primary school in Aotearoa for free. Each release was chock-full of catchy tunes and came in both lyric and karaoke form. Steve Weeks, a former primary school teacher, remembers the excitement of listening to each new album as it dropped. These educational jams were initially on cassette, before moving on to CD. “I used them for assembly singing, music classes, school productions and just to fill in that 10 minutes at the end of the day,” he says.

There’s no doubt these musical moments of primary school life stick with us. In fact, I’d wager that every millennial in the country is capable of breaking into a word-perfect rendition of ‘School Is Number One’ or ‘Fish and Chips’. And while, in retrospect, having primary school kids sing about eating chips for ‘breakfast, lunch and tea’ may have been a wobbly health message, it was the ‘90s, and we were smashing back white bread sammies and Roll-Ups on the daily anyway.

Kiwi Kidsongs albums began at an interesting time in New Zealand history. As a nation, we had begun shrugging off our cultural cringe and embracing our own identity. After singing about the traditions of England and America for the majority of our lives, Kiwi school kids were ready for songs with lyrics about rugby, Marmite and enjoying Christmas on the beach.

Former Learning Media audio producer Janice Marriott was among those responsible for the creation of the series. She proposed it to the Ministry of Education after noticing a variety of New Zealand-themed reading materials, but nothing musical. The first album was released in 1990, and Marriott says it snowballed from there until 2010 when funding was tragically withdrawn.

Marriott was in charge of songwriting — she, along with long-time Kiwi Kidsongs sound engineer, David Antony Clark, wrote the unforgettable ‘Kiwi Kids’ Theme’ — choosing which tunes would make it onto the albums, and writing the teaching notes. As a resource subsidised by the government, Kiwi Kidsongs had to check certain boxes and adhere to the curriculum, but Marriott says her primary goal was to make the songs fun.

Marriott not only helped create the Kiwi Kidsongs series but her dog Bunsen also added his own part to the legacy when he inspired a song that continues to burn deep in my memory.

‘Sausages and Custard’ was undoubtedly one of the most popular songs from Kiwi Kidsongs series (or at least it was a huge favourite at St Joseph’s Timaru, which I feel is a fairly good gauge of country-wide enjoyment). Written by Phil Riley for Kiwi Kidsongs Six, the woeful tale of a dog forced to eat leftovers instead of “Pal and Champ and jellymeat,” was the story of Marriott’s beloved pet. Although Bunsen has now departed for that great kennel in the sky, I’m assured that ‘Sausages and Custard’ was played at his funeral. A fitting farewell for this unlikely Kiwi legend.

Not only did each iteration of Kiwi Kidsongs contain lyrics likely to be remembered longer than the finer details of long division (just me?), but they were songs written by true legends of New Zealand music. It was this variety that Radha Sahar, songwriter and musical director for the majority of the Kiwi Kidsongs albums, believes was the true strength of the collection. “People all around the country wrote these,” Sahar says. “It’s a very comprehensive celebration of New Zealand writing and culture.”

Take a look at any of the albums’ catalogues, and you’re bound to spot a name you’ll recognise. In addition to Sahar, Hinewehi Mohi, Jenny McLeod, Alan Muggeridge, Kath Bee and Jenny Pattrick also all had songs on the series — as did the late Hirini Melbourne and Arif Usmani. The albums also included iconic songs and waiata that are part of New Zealand’s musical canon, such as ‘E papa Waiari’, ‘Nature’, ‘Tōia Mai Te Waka Nei’, ‘Counting the Beat’ and ‘Six Months in a Leaky Boat’. The songs covered all musical genres, were written in English, Māori, Samoan and other Pasifika languages, and referenced distinctly Kiwi brands, places and things.

In short: Teachers loved them, they were really awesome, and the fact that we all still remember them years later proves that they played a part in helping kids form a cultural identity.

So what happened to Kiwi Kidsongs?

In 2010, the final Kiwi Kidsongs album was released, funding was pulled, and the series ended. It was the result, Marriott says, of a “new climate” with a focus on reading and writing rather than music. While some of the songs have been re-recorded and are available online, the majority have been condemned to a life in the back of primary school cupboards.

But eight years after the programme ended there could be a small glimmer of hope for the future of Kiwi Kidsongs. With the government recently scrapping the controversial National Standards, it may provide a chance for the lens to shift back to art and music. Could the series be funded once again?

It’s something that Marriott would be on board with. “We need New Zealand songs out there for New Zealand kids.” And while the chances might be slim, it’s worth noting that for the first time ever, New Zealand has a prime minister who quite possibly sung Kiwi Kidsongs at primary school. So, in the spirit of Kiwi Kidsongs’ relentless positivity, here’s hoping those weird, wonderful and wacky songs will be revived for a new generation to enjoy.

With thanks to Janice Marriott, Radha Sahar, Sally Bodkin-Allen and Steve Weeks.