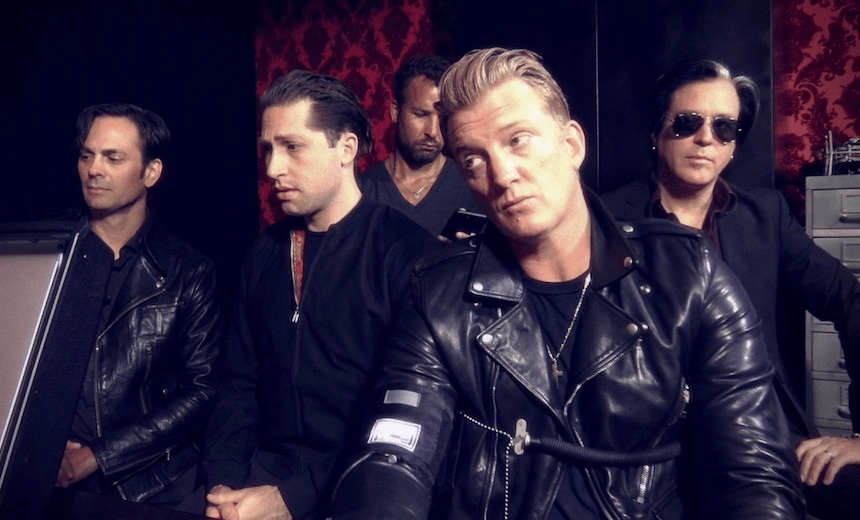 ‘New Zealand is like a second home’: Queens of the Stone Age return

Pete Douglas asks Queens of the Stone Age about their new album, classic rock and fate of the humble guitar.

Last week Queens of the Stone Age played a great show in that strange school hall of a venue known as the Logan Campbell Centre on a very stormy night. I was there and chatted with the band’s rhythm section of Michael Shuman and Jon Theodore about their upcoming album Villians arriving August 25th.

Welcome to sunny Auckland! You guys are going to Darwin next, right? It’s not a usual tour stop off. Is there a story there?

Michael Shuman: We like to do that sometimes, go somewhere that people don’t go because ultimately our fans are super excited about it, and we end up having some of the best shows because of that energy.

Being at the bottom of the world we usually we get bands at the end of a world tour, but here we get you before the album is even released. How do you decide how much of the record to reveal in these shows?

MS: I think we’ve come here early on because it’s like a second home, even though we’re from the States it feels much better to come here and play. Also, we’ve just booked one New Zealand show, which might mean we come back round.

It’s strange because you don’t want to put too much out with the internet now – you play something and even if it’s your first time playing it, it’s forever implanted into the world. But we are also really excited to share all these songs that have been trapped in this vacuum, so we want to share some of them.

Each QOTSA album is different from the one before. When you come together to record is that something you talk about or does that just happen organically?

MS: I think inherently in all of us we want to keep growing and moving and doing something different. If we felt like we were doing the same thing over and over I think it would be boring for us, and I’d say it would be boring for 98% of our fans. It’s also where we are as a band, this is the first record as a whole with the five of us going to a studio and doing a record together, and that’s ultimately how I think it sounds – like a band.

Nearly every previous album has some kind of collaborator involved, whereas this one is just the band and Mark Ronson (producer). Did bringing anyone else in ever come up?

Jon Theodore: I think Mark Ronson is that outside person, and since he’s in the role of producer he was there with us as every single tune was built from the ground up. We were coming off such a high of playing really well together, and I think we just wanted to get out of our own way and get these songs down the way we used to do when we were coming up. So we just played together with no metronome or anything until we got the take. There was just a kind of bubble we were in where it never occurred to any of us to bring anyone else in.

In Rolling Stone, the album’s been previewed as danceable and uptempo, but listening to it, it’s also kind of sinister. It opens with two minutes’ build up that sounds almost like a horror movie soundtrack. How would you describe the sound of the album?

MS: There are a few songs there that are dancey, but I wouldn’t say the whole record is very dancey. I played it for a few close friends and the common thing I heard from all of them was that it sounds like a new Queens, a new direction. I think it kinda started on …Like Clockwork, and this is an extension of that, and even having Boneface involved on all the artwork, I think this whole world we’ve started to create is a new trajectory.

JT: We worked every track based on the intention of the tune and what we thought it needed to sound like, so every song became kind of a different scene in this movie that is the record. The drums are totally fucked up – they sound like a drum machine where the buttons are broken off and someone spilt a beer on it and it got left out on the back porch and got rained on, and that was a conscious decision, because there are a million records with drums that sound like drums, but we felt like with having Mark and being able to sonically craft every tune differently we were like ‘Well why limit ourselves?’

I love the polygraph test teaser video with Liam Lynch.

JT: I was pretty sick in that right? My Mom was so pissed “you didn’t even look up once”. It was a bit Mom. I was acting, c’mon!

Who’s idea was that?

MS: It was Liam’s. We’ve done a couple of things in the past he’s just such a creative and hilarious guy, and I think he and Josh (Homme) talked about doing something, but he came up with that script and it was simple and to the point but really funny and I think it was just what we needed, and people actually really seem to like it a lot. He’s a total freak, but in the best way possible.

There are nine tracks on the album and there were ten on …Like Clockwork – is it a given you wanted to do that classic rock length album and was there much editing out of anything extra?

MS: There wasn’t much editing, we had other songs and ideas but I think we just the days of these 14 or 15 song records are over, and we want to leave our listeners and fans wanting more. The funny thing is, it’s nine songs but it’s still about 50 minutes. We didn’t even think about it until we looked at the tracklist and realised ‘Oh shit, all these songs are over like five minutes’, they’re all monsters.

JT: And there’s a lot of moves and they’re deep, so it’s taller than it is wide, you can really dive in. That’s the cool thing you listen to it once and you hear something then you listen to it again there’s something completely different, like all my favourite stuff.

Are you guys aware of what’s going on in the music world around you much? There aren’t really that many bands of the same ilk, I mean Foo Fighters have a record coming out, Royal Blood have just released a record but there isn’t a lot of good hard rock in general.

MS: I think we notice it most when we play festivals and you look at the lineup and number one: you don’t know most of the bands on there; or, there used to be rock bands that used to take the reigns, but like you said there are a bunch of bands, often our friends bands, who are putting out records this year so hopefully collectively we can get something going.

JT: It’s like guitars are going extinct in a lot of ways. Now it’s punk to learn upright bass or classical guitar.

JT: Yeah it’s a new world right now, and sometimes I feel like a dinosaur but most of the time I’m just grateful that we got started before this transition started – I mean we’re still firmly rooted in the world of guitar.