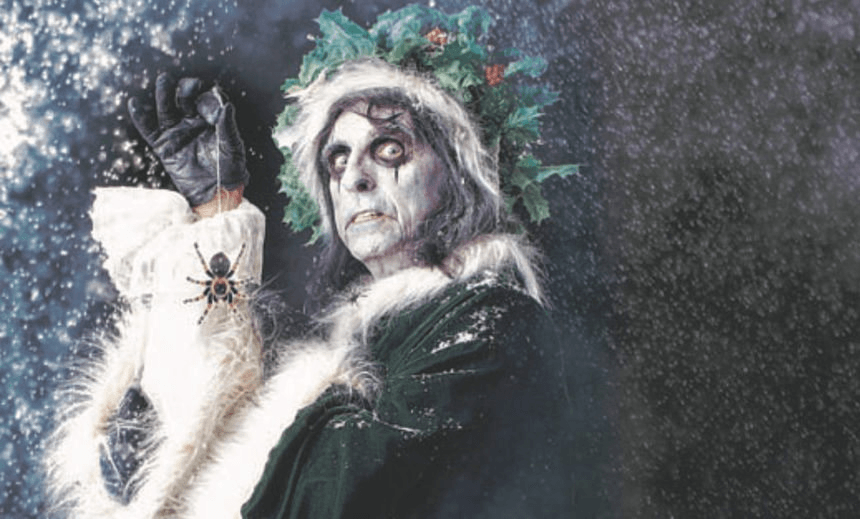 We wish you a metal Christmas: A beginner’s guide to a heavy holiday season

In the world of metal you’re classified by what you like – you can’t really just say you like ‘metal’, you have to specify your genre. And then chances are, especially if you’re a woman, you’ll be lectured in a blisteringly boring way about how ‘that’s not metal’. I’m an old school bogan and I feel that’s an easy shorthand for the type of metal I like – I like the classics.

You might argue Alice Cooper isn’t metal – it’s likely even he would deny he’s metal – but I will fight you because you are wrong. This is the perfect cover by the perfect person. The creepy classic ‘Santa Claus is coming to Town’ was always waiting for someone to make it creepier. Alice Cooper is perfect for that – “He knows where you live, he knows that your window’s open”. It’s absolutely what this song deserves. There are some hidden lyrics too – “then you’re going to burn and die” is a great addition to this song. And the creepy circus-music-type-riff is awesome. Also, I interviewed Alice Cooper once and he was really nice. I told him ‘Poison’ was my wedding song and he seemed real chuffed.

Judas Priest frontman and leather fan Rob Halford is a national treasure. Not least because he made his first solo record in seven years a Christmas album. Halford III: Winter Songs could be played start to finish on Christmas. It’s hard to pick a fave. ‘Christmas for Everyone’ is cute AF: “When Christmas comes for everyone / It brings us all together / For just one day there’s peace in the world / We wish would last forever”. Just pure majesty from the guy who brought us the poetry of “BREAKING THE LAW BREAKING THE LAW BREAKING THE LAW”. ‘We Three Kings’ has a great guitar solo and ‘O Holy Night’ really works with his voice, but I’m picking ‘O Come All Ye Faithful’ as the song of the album because it’s so epic.

Joan Jett and the Blackhearts – ‘The Little Drummer Boy’

OK, you can say Joan Jett isn’t metal. But it’s pretty metal how she sings “When we come”. And I wanted some wahine on this list and metal is a sausage fest so that’s hard. I couldn’t work out whether to include this or Lita Ford and Cherie Currie’s ‘Rock This Christmas Down’. But actually, this one is more metal than that one, which has some weird Christmas rapping. There’s also Lita Ford’s duet with Twisted Sister in ‘I’ll Be Home For Christmas’. There’s also Doro’s ‘Merry Metal Christmas’ but I just don’t really like that song, even though I love Doro.

(Almost Definitely Not) Metallica – ‘Carol of the Bells’

While looking for ‘Carol of the Bells’, all I could find was those fucking awful Petatonix pricks. It made me angry. Just the right frame of mind to listen to some Metallica. If this is Metallica — which it almost definitely isn’t — they take themselves far too seriously to record a Christmas song. Frankly, I’d like it more if it wasn’t Metallica. I couldn’t find any proof it was. And it doesn’t sound like them. But it’s rad. This only narrowly beats the second best cover of this song – by The Muppets.

2016 has been a horror show but this time last year metal fans didn’t know we were about to lose our God Lemmy. I remember the first time I bought a Motorhead t-shirt. The guy selling it said, “Before you buy it, I’m going to test you – who is more powerful: Lemmy or God?” I said the correct answer (It’s a trick question because Lemmy is God) I took home my first Motorhead t-shirt. I have loved Lemmy for so long. It broke my heart to lose him so suddenly. I was in the line at KFC, which is perfectly bogan, when I found out he’d died. I bawled my eyes out, but at least I had KFC. I feel like that’s what Lemmy would have wanted. For me to have delicious chicken to comfort me in my time of grief.

‘Silent Night’ was my nana’s favourite Christmas song. She probably wouldn’t like this version. It’s maybe Testament – it’s definitely Chuck Billy but it also has Anthrax’s Scott Ian on it. I love it. We almost saw Testament once. They were meant to come to New Zealand. And they didn’t. And that’s my Testament story.

Dee Snider does not get the respect he deserves. And I think it’s 99% because of his hair. And the fact that ‘We’re Not Gonna Take It’ is a really annoying song. But the dude knows Christmas and Twisted Sister’s incredible Twisted Christmas is the best Christmas album of the genre. It’s perfection, start to finish. The video clips are also classic – with many metal tropes like sexy librarian removes glasses to be sexy metal fan, and sexy housewife undoes hair tie to be sexy metal fan, and man with white open shirt holds snake.

Dee is cool for a number of reasons – I mean, in the year I was born, 1985, he testified in the US senate against parental warning labels on CDs. His testimony against Tipper Gore and the other pearl clutchers must be seen to be believed. He also wrote a Christmas song for Celine Dion, ‘The Magic of Christmas Day (God Bless Us Everyone)’, and toured alongside a Dee Snider tribute band. He also created a Christmas musical called Dee Snider’s Rock and Roll Christmas Tale. But he was also on Donald Trump’s terrible apprentice show, so he’s in problematic fave territory. It was hard to pick a favourite from his album – I like ‘Heavy Metal Christmas’ a lot, ‘Oh Come All Ye Faithful’ is probably the best, but ‘Silver Bells’ is just so good to sing along to. And the fact that they play it at concerts and people actually do a circle pit makes me so happy I could cry.

I love this one so much. This is why Christmas music so suits metal – because the lyrics are hard-core if sung by the right people – I mean “To save us all from Satan’s power”? that’s a metal lyric mate. I love everything the late, great Ronnie James Dio did. So much so that I named my second born Ronnie James. So I mean, he was always going to be on this list. His voice is perfect for Christmas music. It’s so powerful and huge. He could sing a fish and chips menu and it would sound epic. I love that they just made ‘God Rest Ye Weary Gentleman’ sound like a Sabbath song (Dio is superior Sabbath #sorrynotsorry). Iommi is on it and you can tell. I love the way he sings “comfort and joy” it sounds so different every time he says it – the 3.05 is so perfect. That’s when the song really gets into it. It actually sounds heavy as and like God is going to take you and smash your body against some rocks or something. But also, I believe that he wants me to have a Merry Christmas. That’s talent that is. Oh gosh I miss Dio! What a legend.

Have a merry metal Christmas everyone!