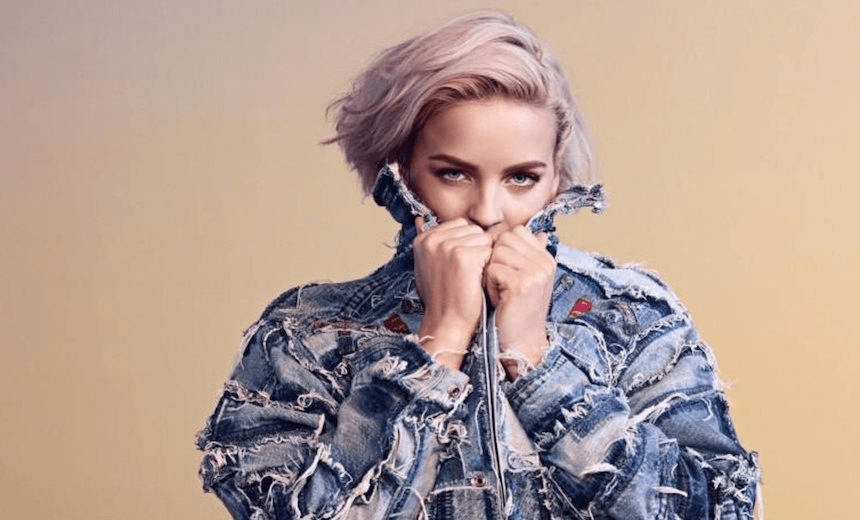 Anne-Marie made her name singing on other people’s hits, but now she’s making them on her own. Kate Robertson caught up with her while she was in Auckland this week to promote her forthcoming debut album.

If you don’t yet recognise Anne-Marie’s face, chances are you’ll recognise her voice. Lead vocalist on Clean Bandit’s super massive smash hit ‘Rockabye’, she’s now storming the charts with her own singles, ‘Alarm’ and ‘Ciao Adios’.

Raised in the world of musical theatre on the West End, the Essex-born singer has spent time as Rudimental’s touring vocalist and has just wrapped a stint opening for Ed Sheeran across the European leg of his tour. They’re big endorsements from big names that have got her and her frustratingly catchy pop songs on a fast-track to the top.

‘Popstar’ label aside, don’t for a second think she’s here to muck around with surface-level fluff. An artist who grew up seeking inspiration from the likes of Alanis Morissette, Lauryn Hill and Christina Aguilera, Anne-Marie is writing anthems that she hopes will not only see people through the ups and downs of everyday life, but that will empower them to strive for more. It’s the kind of moral compass that has served her friend Ed Sheeran well, and will likely attract her a fanbase across the globe as her profile continues to grow.

How did working with Rudimental come about? That seems a pretty big part of your story.

From the moment I was signed to my management label I was doing writing sessions and I happened to get into a session with them. We didn’t work much together, but we became really good friends and kept seeing each other around. One of the singers for the live shows left and they needed a new singer so they thought of me. From that moment I was touring with them which was amazing.

Where did they take you?

We went everywhere you could imagine, I don’t even remember all of the places, which is mental. I loved it, but it was crazy.

Contrasting that, how does it feel to be doing those big trips, but as a solo artist?

It was so scary moving from Rudimental to doing my own stuff. I was ready to do it, but it was such a different feeling. It’s my own material I’m singing now and not someone else’s. Before, if the audience weren’t really feeling it, it didn’t affect me because it’s not my stuff. It’s also very different going from having loads of people on stage to just me, but I love the fact I can sing my own stuff now. That’s the best part.

You’ve featured on a lot of songs with other people, so how excited are you to have an album that’s just you and your own songs?

I’m so excited. I get asked ‘who are you collaborating with on this album?’ a lot and I’m like, ‘No one! This is all me!’ I feel like I’ve collaborated with a lot of people which is amazing and the songs are brilliant, but the good thing about an album is that I can finally show everyone me on my own.

How would you describe the vibe of the album?

It’s very personal. I write from personal experiences, but I also try to write songs other people can relate to. I know a lot of people have felt heartbreak so it’s always good to write about things like that, but I’ve also got a few songs on there about blowing up and being imperfect – a few different subjects I feel like I needed to talk about.

When I was growing up I used to listen to all the songs from people who made me feel like I was growing into a strong woman like Christina Aguilera and Alanis Morissette, and I really feel as though we need some music like that right now.

How much emotionally and mentally goes into writing about such massive themes?

A lot! Because I’m writing about personal things, it’s completely emotional. The fact I’ve been writing for over five years means it’s been a long diary writing experience. Every time I perform I bring back those emotions, which is one of the nice things about it. If I’d written about things I hadn’t felt I think people would realise I wasn’t connecting which isn’t what I want. The fact that it is all personal is the best thing. It’s not draining as such, but it takes a lot of time and effort, which I think is the beauty of it.

Did you always grow up wanting to be a chart-topping popstar? When did that become a career path you started seriously considering?

When I was younger I did musical theatre at a performing arts school which is a bit different to this, but it’s still music. When I was growing up I thought musical theatre would be the rest of my life. I’m from a really small town where you don’t think it’s possible to write this kind of music and have it spread across the globe. It’s very much a dream, but as soon as I met the people I’d met and started writing – so five or six years ago when I was about 19  – that was when I decided it was what I was going to do.

I always knew I loved music and wanted to be involved in it, but I didn’t think it would be as a popstar. I’d always thought it would be with musical theatre which is great, but you’re always acting as someone else and you’re singing other people’s songs. The beauty of this is that it’s all yours, which is scary, but it’s also amazing.

Did you ever in your wildest dreams think it it would take you all the way to New Zealand and Australia?

No, never! Even when I was touring with Rudimental it was amazing to be experiencing it all, but I never thought it was possible as a solo artist. I always dreamed of it, but it’s brilliant. You don’t actually think about it very often because you’re going with the flow, travelling around and enjoying it, but it isn’t until you actually say it to yourself it lands. When you just said that just now it made me feel a bit emotional.

Are there any parts of the industry you really struggle with?

What I did struggle with before is that there are always a lot of people around you and all in different avenues. You’ve got the record label, the publicist, and all these other roles around you, and you don’t really know fully what’s going on a lot of the time. I’m such a control freak that it worries me when I don’t know every single aspect of what’s going on. In the end you’ve just got to trust that you have the right people around you. I feel a lot better about it now because I trust everyone that I’m around and I believe they’re obviously doing it for me, but before that’s what freaked me out. I must’ve been so annoying!

If you could achieve anything in the whole entire world, your biggest goal, what would that be?

I’d love my album to sell a lot and get really high in the charts, which is really unheard of now unless you’re an already made star. That’s the dream, but also to tour in really amazing places. I have been doing that, but doing big tours would be the best. Knowing that people actually pay money to come and see you for the night blows my mind. That’d be it.

The Spinoff’s music content is brought to you by our friends at Spark, who were a presenting partner for the Anne Marie showcase. Listen to all the music you love on Spotify Premium, it’s free on all Spark’s Pay Monthly Mobile plans. Sign up and start listening today.