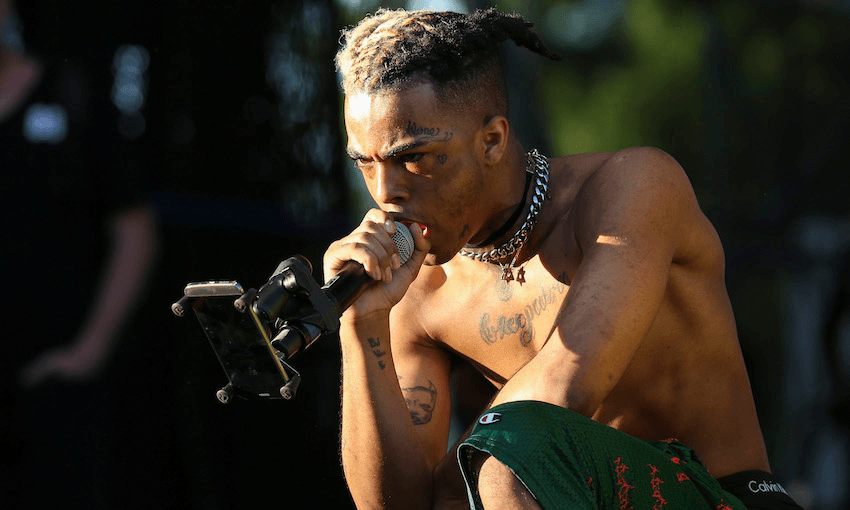 By Pearl Little
Guest writer
Made possible by

XXXTentacion, a controversial rapper, was awaiting charges of aggravated battery of a pregnant woman, domestic battery by strangulation, false imprisonment and witness tampering when he was shot and killed yesterday. Excusing his behaviour and showing support for him because he has passed away tells survivors in your life that you don’t care, writes Pearl Little.

The controversial Miami rapper Jahseh Dwayne Onfroy, known by his stage name XXXTentacion, died yesterday in a shooting outside a motorcycle dealership in Florida. As the outpouring of grief began on social media sites one important thing came bubbling to the surface – who Onfroy really was.

Onfroy was an artist, a son, a brother, a friend, but he was also a domestic abuser and we must not forget this. No-one deserves to die and the idea that we should celebrate anyone’s death is innately wrong, but the unfortunate event of someone’s death cannot overwrite the despicable things they did when they were alive.

The mainstream hip-hop world started paying attention to Onfroy in early 2017, when his 2015 track ‘Look At Me’ started gaining immense popularity on Soundcloud. Then details of his past started to emerge. In October 2016, Onfroy was arrested and charged with aggravated battery of a pregnant woman, domestic battery by strangulation, false imprisonment, and witness tampering.

In September of 2017, Pitchfork published the full witness testimony of Geneva Ayala, the survivor of Onfroy’s abuse. The witness testimony tells a horrifying story of jealousy and extreme abuse at his hands. Ayala details how Onfroy hit her so hard she became dizzy and heard ringing before he left the room and returned with a barbecue fork and brush, asking which one he wanted her to put up her vagina before continuing to assault her. Ayala details daily verbal attacks and physical incidents that would occur most days, including choking, breaking clothes hangers on her legs, backhanding her so the inside of her mouth would welt, threats to cut her tongue out and holding her head underwater threatening to drown her.

But the event that got Onfroy arrested happened on 6th October 2016, when, according to Ayala’s testimony, Onfroy punched, elbowed, slapped and strangled the then-pregnant Ayala to the point of vomiting and almost losing vision. He then proceeded to take away her phone and keep her hostage in a friend’s room for two days before she could escape and call the police.

Onfroy also claimed in an interview for the No Jumper podcast that in jail he once went crazy and stomped on a gay roommate’s head whilst repeatedly calling him a “faggot”.

While it’s nice to think that there are always more sides to the story, Onfroy repeatedly showed that he was exactly what his critics accused him of being. In an Instagram video posted in September, Onfroy stated “everybody that called me a domestic abuser, I’m going to domestically abuse y’all little sister’s pussy from the back” while denying all charges of actual domestic violence.

Since his death, people have claimed that Onfroy was trying to work on his “demons” and make things right. They cite his claims that he donated $100,000 to domestic violence programmes and planned an “anti-rape” event at last year’s Art Basel in Miami, but the donation claim has never been substantiated and the “anti-rape event” was cancelled. Cancelled public events and unsubstantiated claims of donations don’t exactly constitute making things right, especially when he never admitted any guilt.

The death of an idol, especially a musician whose music so many claim helped them through mental health issues, can be heartbreaking and I don’t want to tell people how to feel about loss. But it’s important to remember these accusations against Onfroy were public very early in his career. As rapper Denzel Curry once said, “when Onfroy got into trouble, that’s when he started to get big.” It’s not as if people had bonded with his work for decades and were completely shocked by news of his violence. People supported an artist who was known to be an abuser from the very beginning.

Onfroy wasn’t a one-off. Onfroy was a man that many women encounter every day. The event of one’s death does not erase one’s actions. Excusing his behaviour and showing support for him because he has passed away tells the survivors in your life that you don’t care.

We must stop neglecting the trauma experienced by people at the hands of those close to them, who are meant to love them. We cannot move forward in preventing sexual assault or domestic violence before we provide real accountability to those who cause harm. Humanising and sympathising with someone who never had any interest in fixing his mistakes – or even owned up to them – just reinforces the sort of negative behaviours that are familiar to any survivor who’s had friends or family try to rationalise their abuse.

If you’re a survivor of abuse reading this right now, please know that you do not deserve to feel as if you should sympathise with or humanise those who hurt you.

Onfroy died while awaiting trial for his domestic abuse charges so the accusations will now legally be “only” accusations forever. The event of his death risks his actions being swept under the rug, but we don’t have to let that happen. Don’t make this man a martyr for tortured souls; don’t give oxygen to victim blaming culture so negatively geared towards women that he contributed to.

If you, like me, once listened to XXXTentacion before you realised the gravity of what he had done, put good back into the world and donate to these domestic violence charities:

Rest in peace, and in power, to all those who have lost their lives to domestic violence.